Zendikar is a semi-private roleplay named after the Magic the Gathering set by the same name. The story-line of Zendikar in MtG pertains to the Eldrazi, a race of ancient, powerful beings that suck entire planes of their mana. Once, the Eldrazi were trapped upon Zendikar, a hostile, ever-shifting world constantly trying to kill those that dare set foot on it. Upon awakening, denizens of Zendikar and some planeswalkers had to team up to stop them to prevent the end of their world. The RP was named such in accordance to the minor parallels between the Elder Gods and the Eldrazi.

How the roleplay functions

Based around the classical D20 system, Zendikar has two current DMs: An Esoteric and Gantheon.

1: You just got seriously stomped. You're actually the worst. Epic failure. If you're trying to use a spell, it will backfire on you.
2-3: Action yields terrible results.
4-5: You're still pretty bad, but it's surviveable.
6-7: Seriously below average results in whatever you're trying to accomplish.
8-9: Slightly less awful than 6-7.
10: Reroll.
11-12: You're pretty okay. Average, really. You did the thing, congrats!
13-14: Above average.
15-16: Great results!
17-18: Exceptional results.
19: Save the prince(ss) on top of getting an incredible result. You are in serious business.
20: Something explodes. It has to. No exceptions. Something explodes.

There are two types of roll modifiers: beneficial and detrimental. Having a either one may give you a +2 to a roll or -2 and so forth and so on. How much is situational.

Beneficial roll modifiers include but are not limited to:

- Buffs cast by a priest (Such as Berserk)
- Weapon enchantments (Several artifacts can be found and used by player-characters. Some of them may give modifiers to attack rolls.)
- Inspired! A war-cry or some good, inspiring words can inspire members of the party.
- Favorable conditions, such as the enemy being: snared, helpless, terrified, dazzled.
- The element of surprise. This includes invisibility and concealment.
- Alertness.

Detrimental roll modifiers include but are not limited to:

Within the confines of Daemonheim, the characters have a unique skill, or maybe not. Choose a gift RPG style, except the DM isn't giving it to you. You're buying it. This ability is semi-confidential, known only by the two DMs (An Esoteric and Gantheon) up until the moment it is used IC, at which point it becomes known. This ability can be just about anything. These abilities are unique and cannot be changed after being used IC (as, by then, it's already cemented).

The main reason for the use of these powers is that the Zendikar RP group roleplays the equivalent of Daemonheim on Hard Mode, which requires exceptional strengths to combat even stronger encounters. It is through the promise of some powers that the Faithful of the Empty Lord keep their grip upon some of those that follow them.

The abilities that cannot be used are anything that falls under Omnipotence[1]. There are exceptions to this rule but they are mostly race-specific and a DM must be contacted for further information.

"Plot lock" is a term used to define plots that prevent characters involved with interacting with those outside of the plot-line because of obscure location or for other secondary reasons. "Plot lock" is prevented from being a problem because of the NPC that accompanies the group.

Baldur the Gatekeeper , also aptly named "Guidebro" is a Fremmenik man bound to the eastern part of the Wilderness where Daemonheim is found. While a non-combatant, he is capable of opening rifts to the seperated Gatestones placed on the covered floors. During the descent, he takes care of placing a Gatestone in a safe-zone. With his assistance, characters are capable of entering Daemonheim and visiting whatever floor has already been cleared in the past (as those are the only ones with gatestones).

This ability can also be used to go from the bottom back to the surface, to the castle. He has haunted, empty grey eyes and black hair that is sloppily chopped. He refuses to speak to player-characters unless they need him for something in specific, such as a guide or needing a rift to return to the surface. He notes that he is "mostly human".

Session 1: Some of The Faithful outside Daemonheim's labyrinth.

Session 1: Faeyrin makes the first royal fuck up of Zendikar. 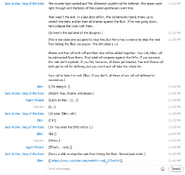 Session 1: The Faithful win by the skin of their teeth.

Session 3: More like Kal'Wrecked.
Add a photo to this gallery
Retrieved from "https://rsroleplay.fandom.com/wiki/Zendikar?oldid=133362"
Community content is available under CC-BY-SA unless otherwise noted.