This page addresses information about Zaros, his religion, and his followers as it applies to World 42 roleplaying. Any valuable contributors are welcome to contribute, especially as new content comes out in-game.

Zaros, also known as The Empty Lord, Great Lord, God of Unknown Power, and is The Divine Aspect of Darkness Energy, whose arrival in Gielinor was one of the most important events of the early Second Age. He is most closely thought of as the God of Control and Manipulation, but is instead more of an observer than a string puller. He is an anomaly in that he is a god that The Adventurer learns of, over time, from books of information about him, and yet it is still very unclear what his alignment is. However, while he may have ruled a pleasant society, it's clear that he was not aligned distinctly with "good" (like Saradominist Order or Armadylean Law) as evidenced by his willingness to associate with "dark" creatures, but neither was he aligned with evil; he sought for a way that all mortal races might flourish. His symbol is a circle with an X in the center and four points around the outer edge. His signature color is purple.

For a complete overview of Zaros' history, see the associated page on the RuneScape Wiki.

Zaros was created aeons ago by the Elder Goddess Mah on the world known as Frenskae, together with his sister Seren. He disagreed with Mah's treatment of the duo as toys and eventually left to explore the universe. Over the course of his travels, he both learned and taught a great many things. Between others, he first encountered the Demons of Infernus and then the Vampyres of Vampyrium, learning of language and society from the Demons, and then passing those crucial elements of society onto the once primitive Vampyres.

Zaros arrived in Gielinor after Guthix entered his first sleep. It is likely that Guthix and Zaros, as well as their followers, have little to no relationship. After his arrival, Zaros persuaded the Mahjarrat, a powerful race of near-immortals, to join his forces. Zaros conquered much of the what is now Misthalin, Asgarnia and the whole of what is now the Wilderness, which was then a fertile plain. He founded several cities, of which Senntisten became the capital of his empire. Because of this massive, prosperous community, the Second Age began was known as the Golden Age of Zaros. This empire crumbled when Zaros was betrayed and banished by his foremost general, Zamorak.

At Zamorak's return, most of Zaros' followers abandoned their original god and sided with Zamorak. There were notable exceptions however, including the fortress city of Padewwa and the magnificent capital of Zaros' empire, Senntisten. Before the God Wars during the third age, some Saradominists attempted to wipe the memory of Zaros from Gielinor. The Saradominists locked away a group of Zarosians, including Nex in a dungeon close to the present day God Wars Dungeon.

As a result of the Grandmaster Quest "Fate of the Gods", Zaros has returned to Gielinor in corporeal form, though his presence is officially unknown to all except the most trusted of his followers: Nex, Azzanadra, Sliske, Char and Wahisietel. There were choices in the quest that determined Zaros' status when he returned, such as being injured or not. Choices like these are normally not considered in roleplay except in the case of a release of statistics. The majority choice by large was to let Zaros back in to Gielinor uninhibited.(The IMGUR picture and JMod threads would have been linked but they have since been deleted.)

Any real, concrete records of the ways of Zaros have been destroyed by Saradomin and Zamorak. As such, there is no absolutely "correct" way of worshipping him or carrying on his ideals. Some of Zaros's followers are evil in the conventional sense of being ruthless, enjoying being deceptive and seeking power for power's sake. In addition, the Ancient Curses seem to be evil (or at least highly combative) in nature: they focus on inflicting damage on others and draining others of their powers. Although some may jump to the conclusion that Zaros is evil, evidence is inconclusive. It is very likely Zaros' army of demons and vampyres committed evil acts, but there are no records of Zaros himself promoting evil: however, it is likewise true that there are no records of him promoting good. Additionally, even creatures who did not and do not follow Saradomin or Zamorak, such as the Pharaoh Queen, call Zaros a 'vile creature' whom they clashed against long ago, though this is likely because of his war with the Menaphite Pantheon.

This leaves an interesting window open for roleplayers, as Zarosian characters have the opportunity to interpret Zarosian teachings in their own way from what they have learned of their god. Furthermore, Zaros' ideals and goals have changed since the fall of his empire, which may lead to confusion once it becomes more widely known that he has returned to Gielinor.

Zaros views his own faith as not so much a faith, but a philosophy. He seeks to guide mortals on the path to power and leadership while not directly interfering. In truth, Zaros' beliefs are similar to that of Guthix; he has enough respect for mortals to step aside and let them do what comes naturally, to let them make their own choices. Zaros is not so much a controller as an observer of sorts, and can be comparable to an older sibling trying to guide his youngers towards greatness, instead of forcing them and punishing them if they disobey.

This is a change from his earlier attempts; as Zaros stated himself, he realized that pushing mortals into believing or doing something would always result in resistance, which is why he now wants to attempt to guide them.

This category addresses traits that players, often new ones, give their Zarosian characters but that aren't actually seen in Zarosians on Gielinor. That is, a character may have these traits, but it would not be expressly due to the teachings of the Zarosian religion. 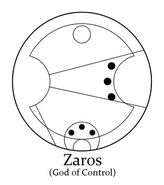 A suit of armour worn by the ancient Zarosian warrior Torva 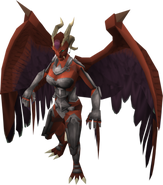 Nex, an abnormally large Nihil given sentience by Zaros

Zaros is stabbed through with the Staff of Armadyl by Zamorak

Zaros's symbol atop the ancient staff 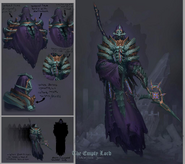 The theme played when Zaros forms a new body:

Retrieved from "https://rsroleplay.fandom.com/wiki/Zarosianism?oldid=135959"
Community content is available under CC-BY-SA unless otherwise noted.