Yokrad is a former Bandosian human, now turned god. He is role-played by the user Cyprian Wily.

Yokrad was born during the God Wars and grew quickly in order to survive. As he got older, he enlisted with Bandosian forces under General Graardor. He was among the war god's army that was frozen in the God Wars Dungeon.

When the ice thawed, Yokrad left the dungeon and emerged into a new world. He later helped create the Chosen Battalion. At one point he was Bandos' Chosen Commander.

Yokrad ascended to godhood after absorbing the power from three different sources: Bandos' repaired pendant, Elder God magic that had corrupted his corpse and brought him back to life, and the Sentinel after it was reconstructed.

Yokrad was born during the God Wars. His parents were killed six years after his birth, but he appeared to be a strong child, and the orks who killed his parents saw potential in him. He grew quickly, becoming a skilled melee fighter. When he reached age 30, he was recruited by General Graardor to fight for Bandos.

He respected those with higher rank than him, though he had the most respect for Graardor. He became friendly with Graardor, and they fought many battles together. Later, when the gods' armies were tasked with fighting off Zamorak's, Yokrad had managed to prevent them from advancing any further for a long while. Later, Graardor assigned him to spy on some of the remaining followers of Zaros. Yokrad accepted his orders and went off on his own. He spied on the Zarosians for a while, but was eventually spotted.

He fought back the ancient warriors with ease but, though his progress was halted by a strange and powerful creature. Yokrad, not fearing it, asked what it was. It called itself "Nex." Yokrad attacked Nex with all of his might, but was easily defeated. Nex seemed impressed by his bravery and attempted to recruit him, but he refused the offer, stating that he would never betray the Big High War God. Nex, enraged by his response, used a powerful spell to severely injure Yokrad, though he managed to survive. Nex vanished, believing that he was dead. Some time later, he was found by a group of goblins and returned to Graardor.

After he had recovered, he was sent with Graardor's army to the God Wars Dungeon to fight off the Zamorakian forces. Graardor attempted to steal the Godsword from Kree'arra, though he failed and retreated back to Bandos' Stronghold. The armies fought against each other, but a eventually a powerful spell was cast, freezing Yokrad and everyone inside.

Creation of the Chosen Battalion

After several thousands of years being frozen in the dungeon, it eventually began to thaw. General Graardor ordered Yokrad to go outside and gather reinforcements. It was then when he discovered that the God Wars had ended, becoming rather upset about it. He eventually came across a camp of more Bandosians led by another ourg named Gorbuk. Gorbuk claimed that he was the Chosen Commander. Yokrad believed him, and the Chosen Battalion was created. They conquered the Goblin Village by slaying all of the goblins there. Later, they began to excavate a temple where Yokrad was possessed by a spirit, but Gorbuk easily defeated the spirit and a skeletal ourg.

Yokrad stands at 6'1 and has white hair and a beard, His right eye was destroyed after his battle with Rosaline Haines and thus he wears a leather eyepatch to cover it up. He wears a Trenchcoat in Bandos' colours with a suit underneath it.

Yokrad can be described as a Warmonger he likes to cause wars for the hell of it and to make profits, however he keeps his friends such as Drok closely and would never betray them. He is usually nice to other Bandosians and he dislikes followers of other gods and fighters for Organizations such as The Godless

His weapons consists of: 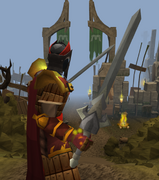 Yokrad gazing over the village, in his god wars armour.

Yokrad drawing power from the pendant. 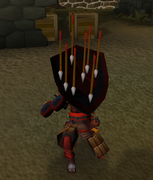 Yokrad fighting in the God Wars.

Yokrad taken over by his Bandos personality, around year 2-3 of the Sixth Age. 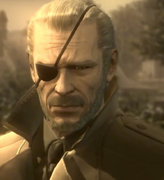 Yokrad in year 4 of the Sixth Age.
Add a photo to this gallery
Retrieved from "https://rsroleplay.fandom.com/wiki/Yokrad?oldid=152326"
Community content is available under CC-BY-SA unless otherwise noted.