WildRebirth was born in Ardougne on the 24th Of December 2011 to Sire Myers Micajah and Lady Mary Elizabeth Micajah. The family of three led a normal life, until everyone in the town started noticing WildRebirth's rapid growth. "What is she,mother?" Asked a 10 year old kid. In 3 months, WildRebirth grew to age 13 and developed strange abilities. The citizens of Ardougne grew suspicious and confronted Sire Myers and Lady Mary. They discussed Wild Rebirth's birth alone:

Sire Myers said: "We should tell them the truth, since they have notice these vivid changes in her..."

Lady Mary said: " Did you forget what the voice said?"

Sire Myers sighed and said : "Do not let the cat out of the bag"...

Lady Mary said: "Yes..Everything is going to be fine dear. The voice said that her rapid growth should stop at age 20... and she could

They decided to keep this a secret and make everyone believe that WildRebirth is a normal child with just special bone growth.

But not everyone believe them. Some were determined to find the truth. A citizen of the H.A.M clan said: "If she happens to be a monster, we will have all the rights to get rid of the child as soon as we can!"

No one could except the family thinking they were dealing with cults.

WildRebirth was actually from the early Fifth Age. She is reborn into the Sixth Age, thus the name "Rebirth". Her original name is Teddy. In the Fifth age, her father, a white knight, died slaying dragons and her mother, a shopkeeper single-handedly raised Teddy. At age 16 she laid her mother down in a coffin and said a last prayer before burying her. Left with no one, the orphaned girl roamed around Gelinor. She learned how to fight and survive with the help of many people she met in different towns. Teddy went on to do a few quests. One of them was with the temple Knights. She passed the test requirements and earned a place as a temple knight. While training with the Temple Knights, She fell in love with a man, Sire Michael Hiddleston. She was too shy to confess her love and never tried talking to him because he was one of the top 3 Temple knights. At age 20, Teddy was an official Temple Knight and ready for any battle.

An unfortunate series of events occurred. The Knights had orders to assist in combating the Mahjarrat threat, especially Lucien. In addition to the threat of Lucien, they teamed up with the White Knights and an adventurer in both orders, and finally succeeded in capturing the murder-mage, Solus Dellagar, and now need to focus strength on the Sea Slug threat as well, due to an unsuspecting adventurer unintentionally freeing the Mother Mallum the original foe of the Temple Knights.. Teddy T_55 was one of them. It was really unfortunate that she did not survive. She was stabbed in the back while helping a fellow member who fell down in the middle of the fighting grounds.

Guthix has no gender, mostly referred to as "it". In the afterlife, Teddy met Guthix for the first time while it was sleeping. It could sense her presence and thus sleep talk in a soothing low sound of different voices.

Guthix : "hahaha, of course I exist child, I am the create of Gielinor. I was written in books, people read about me but non believed. If you do not have faith, I shall not appear."

Guthix starts counting with his fingers while eyes closed. It somewhat found a suitable date and time and stops counting.

Guthix : "Young one, you are very brave. I shall grant you a second life, take it as a gift from Guthix. You shall be named WildRebirth, your last name will be Micajah. You will be born to Sire Myers Micajah and Lady Mary Elizeberth Micajah of Ardougne. You will grow faster then the human race, your fast growth will stop at age 20 which you stopped living in the second age, it is the continuation of your life. I will take away all your past memories, including the conversation we are having now. You will only remember that Guthix gave you life. Do you understand?"

Teddy closes her eyes and falls into a deep sleep.

Everyone got to see the beautiful baby girl. Sire Myers was so happy, His prayers were answered. They are the only 2 people in Ardougne who believe in Guthix existence. When Sire Myers and Lady Mary were finally left alone, a lime green light appeared with a soothing low sound of different voices. It explained everything about Wildrebirth's birth. It also said that special abilities is infused in the baby girl. A secret prophecy must be completed by WildRebirth. The light vanished, leaving them to think about what was said.

The citizens of East Ardougne caused a riot and set WildRebirth's house on fire, they managed to escape thanks to the special abilities she has.

Finally, after weeks of searching for a place to stay, they found Shilo Village in Karamja. The villagers helped dressed the wounds on their bodies. Having heard about Ardougne, the chief of the village allowed them to stay.They learnt how to hunt, cook and fight in the jungles of Karamja with the help of the villagers.

WildRebirth decided to go on an adventure, exploring the Karamja jungles on her own. She ran all the way to Brimhaven, hiked up a volcano and found a cave where lava giants live. She was so interested to see these kind of creatures. She decided to venture further and reached Musa Point.

It is the beginning of WildRebirth's Adventures.

We traveled by foot for so long and finally came to a village called Shilo Village. The villagers were surprised to see outsiders. We tried to acknowledge them but the next thing I knew was waking up in a room filled with lots of food and drinks. As I got up to take an orange, I felt a burning pain near my hips. I looked down at a bandaged area near my hips. It must have been the fire... Someone tapped my right shoulder, I attempted to break the hand to protect myself.  The old man grabbed my hand and stopped me from attacking him.

Man replied : " Would you stop screaming for awhile?

Man replied : " I am Malik Mariyando Chief of Shilo Village. Your parents are resting in another room. You three blacked out while walking forward to our Village. You all looked drained and wounded, I ordered the villagers to dress your wounds as no one here helps outsiders. We are not used to outsiders visiting our village. Care to tell me what happened with your journey?

As I peeled the orange, I told Chief Milak about Aroudogne. He was sad to hear that we were chased out and have no place to stay. Milak gathered every villager and announced that we are allowed to stay here and be treated the same. We were taught how to hunt in the jungles and cook the meats of different creatures. I will never forget Chief Malik's help.

As WildRebirth ventured further in Gelinor, She found a small town called Dranor. Everyone seemed nice, especially the Witch. The Mayor of Draynor approached WildRebirth and they both shared their stories. The Mayor decided to let WildRebirth rent one of the unoccupied houses.

WildRebirth was venturing into Lumbridge when she bumped into a blue hooded figure. His name is Dion Magnan of Entrana, Leader of "That Saradomin Group". Dion Magnan explained a little on what the group does.Thinking about Guthix Death, she lost faith. Decided to be a follower of Saradomin. Dion Magnan invited Rebirth to the clan and later a uniform Ceremony took place.

I ventured further into the dark swamp and found a dark cave. Curisoity got the better of me, I decided to explore the cave. Bought me a lamp and some ropes. Disgusting sight! I swear! So many bugs, yucks! I walked further and found another path leading to an open gab. I went in and came to another cave. Walked further and saw a large serpent, Holy Saradomin! This creature is gonna eat me up! Juna starts talking to me with a soothing lady's voice with a Victorian accent.

Juna : "Do not fear young one, I am Juna, Guardian of Guthix Tears. I believe you've seen him".

Juna: " hahaha, you have indeed seen him. I am glad you found me, I have something to tell you. There is a Prophecy in your name."

WR :"What Prophecy!, no one told me anything!"

Juna : "Calm down young one. Let me Explain. Every gift, comes with a price. You may not understand it now, but soon in your quest to fulfilling the prophecy, you shall succeed. This is all I can tell you for now. Come back me when the time is right and I shall tell you everything you need to know."

I ran out as fast as I could and thought about what Juna had said. What the hell was she talking about, nutcase! Prophecy, my ass!  I kept running till I bumped into a blue hooded figure.

DM : My name is Dion Magnan, Nice to meet you.

WR: Hi Dion, I'm WildRebirth, nice to meet you too.

DM : " Would you like to join my clan? We are followers of Saradomin and seeing your title, I presume you're a follower too?

WR: "Yes, and I would gladly accept your invitation."

DM : " Well, Lady WildRebirth, I will see you in our church in 20 mins for a uniform ceremony. Have a nice day!"

This was the most special day of her life. Anonanolius proposed to Rebirth in front of the commards during a clan event. Lady Melain got her a beautiful dress. Three bridesmaid were chosen, Lady Melain, Cuppy and Tichi. They are dear friends of hers. Lord Dion helped to conduct the wedding later that day. Lord Dion also invited a former king Of Ardougne. A memorable day that will never be forgotten. 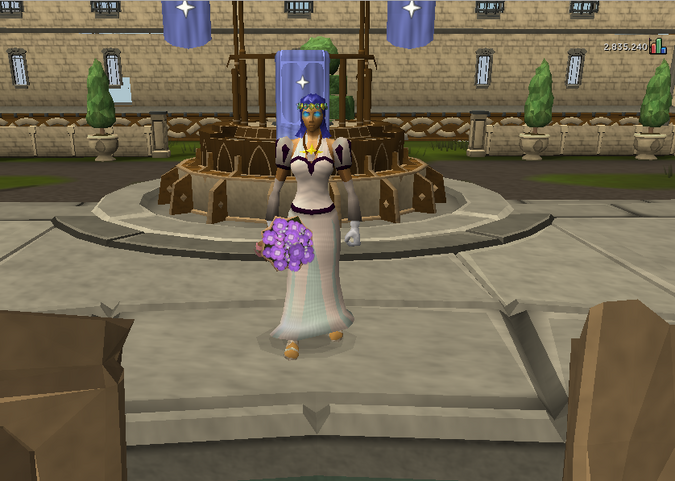 Retrieved from "https://rsroleplay.fandom.com/wiki/WildRebirth_Micajah?oldid=119881"
Community content is available under CC-BY-SA unless otherwise noted.