Start a Wiki
Warped Beings are those who have had their life force corrupted or in some way, their physical and magical nature changed into something unnatural. The most common cause of this occurence comes from experimenting on the Anima Mundi.

Warped beings have little to no history in the events of Gielinor besides rare events. The most notable of these occurances are the experiments performed by a gnome named Glouphrie in his underground city of Arposandra.

Warped creatures also made an appearance in Gielinor's history through the rise of the Red Axe, who kidnapped innocent dwarf citizens from Keldagrim East and used machinery and magic to warp them into Chaos Dwarves. Chaos Dwogres were added to the ranks as well, being a magical cross of dwarf and ogre, this process was not as well documented as the chaos dwarf creation was and still to this day remains a mystery. Arposandran Gnomes are suspected to be involved with the Red Axe, and it is believed they were the ones who delivered the machines to the Red Axe company that warped the dwarves into chaos dwarves.

Once more did warped beings make an appearance on Gielinor, but this time it was much more subtle and did not have as great an impact as the other two instances. A powerful Ramokee Skinweaver from the gorajo people managed to stumble into Zanaris after her banishment and then to Gielinor through the fairy rings, eventually becoming fascinated with fungus that formed the rings. She began to use her natural magical skills to influence the life force of another fungus, making it bond with the bodies of the naitive animals of the cave she took residence in; creating the Polypore Dungeon as well as the creatures contained within.

Similar to the Polypore Dungeon; this piece of history is not as well known as the rest of them, and is largely overlooked by the other more well known examples. The taint of Daemonheim's lowest floors, aptly named the warped floors, is known to cause changes of varying degrees among long-term inhabitants. A noteable example of the effect is the Warped Gulega, a creature that came from the Gorajo Home Plane and entered Daemonheim somehow, ultimately being warped by the chaotic taint of the lower floors.

The machine used by the Arposandran gnomes to warp lifeforms. 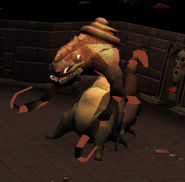 A Warped Gulega, changed due to its close proximity to the chaotic energies of The Rift at the bottom of Daemonheim.

A guard dog from the warped floors, similarly scarred like the Warped Gulega.

A succesfully warped terrorbird, which was given sentience and now guards Arposandra for the gnomes that dwell there. 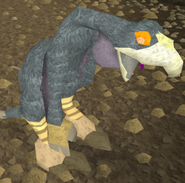 Another failed warped version of a terrorbird.

A warped tortoise, similar to the terrorbirds.
Add a photo to this gallery
Retrieved from "https://rsroleplay.fandom.com/wiki/Warped_Beings?oldid=99576"
Community content is available under CC-BY-SA unless otherwise noted.