Vayne Aura is a Zarosian Justicar. The exact nature of her intent is unknown, but one would guess that it would be to advance the agenda of the Zarosians.

Vayne was raised in Ardougne from an early age until her family was murdered. The King's court refused to investigate, and she was orphaned. Alone she found herself in the care of a mysterious stranger. The stranger was a Zarosian Mage who lived in Varrock, who went by the name of Lazarus Nazul.

As the Fifth Age progressed, Vayne learned the standing ground of the Zarosian religion, and what it meant. She followed the path of a Zarosian Justicar to enforce the ways of Zaros. Training in vigorous melee tactics, soon becoming an expert swordsman, taking the oposite path of her mentor. She traveled the world to sharpen her skills, leading to alot of adventures which sometimes ended with her fighting overwhelming odds.

As an official Justicar of Zaros, Vayne swore to uphold his ways. But to also destroy his enemies. In the late part of the Fifth Age, she successfully infiltrated the Saradominist Temple Knights. After spending enough time in the orginization. She attemtped to take Sir Vey's life but failed in a fatal error in which two Falador civilians and a knight were killed. Her cover was blown and she fled to Al Kharid. Her later activities include murdering political and religious figures.

When Guthix died, the gods returned to Gielinor, all except Zaros himself. But word got out from Zarosian sources that Guthixian artifacts might unlock the key to his return. Vayne ultimately rejoined with her old mentor Lazarus Nazul, in the hopes to raid a site of high importance to Guthix. 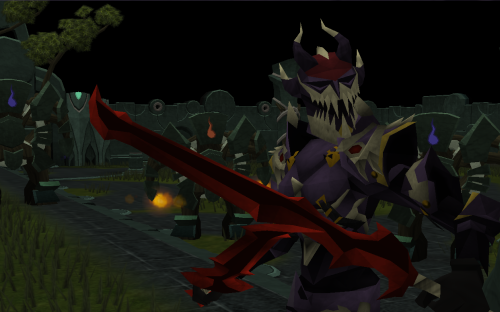 Finding themselves deep underground in a Guthixian Complex, the pair slayed Guthixian Druids and Priests left and right until they came upon a central chamber room deep under ground. They cautiously walked as they heard grinding in the walls. Suddenly mechanisms of Guthixian affiliation sprang from the walls. In an instant they were surrounded. Outnumbered and out matched the pair ran past the machines to the bowels of the complex. They managed to fight off a few but the remaining were too strong. Vayne held off the rest until Lazarus was able to find what they had come looking for.

Vayne fought tirelessly, until she eventually was able to beat the last Guthixian Mech. Wounded where one had shot her with a powerful spell, she slumped over against a wall and blacked out.

She was recovered by Lazarus and healed. Weeks passed as the two plotted their next move. There were too few Zarosians to gather and assualt the newly returned Zamorak. And the god's would surely kill eachother regardless of the mortal cost. Vayne and Lazarus have since stuck to the shadows of Gielinor, searching for ancient ruins.

Vayne is 5'6 and weighs 128 pounds. She has shoulder length black hair and brown eyes. It is rare to ever see her without her Dragon Armor which has a mysterious past. She also has a heated past with the Zamorakian affiliated Black Knights. Vayne is Well-Mannered, Compassionate, Loyal, and Kind. But do not get the wrong idea, she can be rutheless to her enemies.

As history tells, Justicars are people who uphold the law. As a Zarosian Justicar, the will of Zaros is law. This permits Justicars to kill indiscriminately, those who oppose Zaros. Vayne follows a strict code of conduct which is based on ancient laws long forgotten but nurtured by those who seek and love knowledge. By her code she cannot accept arrest under any other authority beside's that of Zaros. Which has made her a wanted criminal in some parts of the world.

She will wear an assortment of disguises to make sure she is not recognized in public.

Retrieved from "https://rsroleplay.fandom.com/wiki/Vayne_Aura?oldid=146218"
Community content is available under CC-BY-SA unless otherwise noted.