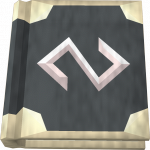 Void, also known as Void Adept, is the youngest of the Wiki Adminstrators, and is responsible for the design of the current wiki theme, the Immortues Project and the Frostentome Transcripts, and is one of the only roleplayers who have had a character legitimately ascend to a demigod: Mephiles. He also created The Hoardstalker and Sephirot, though Mephiles came first.

He can be summoned only through the offical wiki Discord, under the name of "Void".

Void is a reclusive character, preferring to only commune with his fellow administrators, particularly Lor-Break. While not an expert with wikia’s stupidly-complicated code, Void has demonstrated a willingness to experiment with it, combing it with his talent with Photoshop and graphics to achieve professional results.

Often deferring his judgement until consulting his seniors, Void will generally reply with simple answers. If disturbed however, Void will not hesitate in enforcing his authority with draconic force, though punishments and bans that make the perpetrators a public example to others.

[Redacted, as per the Official Secrets Act]

Void is the main author of the Immortues Project, which sets to document and publish articles relating to the Immortues that he, Fraxtion and Super Ferret created. The majority of the Pre-2015 content is constructed from either personal account or a series of internal documents between them, such as short stories, plotline briefs and screenshots. Almost all post-2015 content is written by Void, with continutity checks by Fraxtion.

Only Void or Fraxtion are permitted to edit such articles, unless permission is granted.

The following Navbox connects all pages associated with the project:

Retrieved from "https://rsroleplay.fandom.com/wiki/User:Void_Adept?oldid=158775"
Community content is available under CC-BY-SA unless otherwise noted.