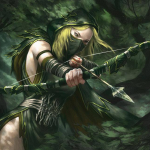 Leader of the Keepers, a secret Dark Elven sect operating out of Dinas Gwaelod. Killed by a rockslide in the Underground Pass while attempting to escape the Battle of the Deephold.

Marwnad's charismatic and power-hungry second-in-command. Led the Keepers' defence during the Battle of the Deephold. Whereabouts unknown.

A member of the Keepers; scorned and abused by Marwnad and Peredur, but greatly trusted. After abandoning Marwnad during the Battle of the Deephold, he was hunted down by Peredur and killed.

A handsome human carpenter of Ardougne. Erstwhile ally and accomplice of Mathonwy who helped kidnap Fynnien. While on the run from the Kandarin authorities for the same crime, he tracked down and joined the Keepers, who eventually sacrificed him.

A primeval, owl-like creature from the Crystal Plane.

A highly-respected Elf apothecary and healer, dwelling in Prifddinas. Grandmother of Fynnien.

A professional musician of about Fynnien's own age, and her first love. They were together for several years before breaking up in the year 168 of the Fifth Age, after which they were no longer on speaking terms. They became close after Fyn returned to Prifddinas in the year 7 of the Sixth Age, and Tristan coordinated her rescue from the dungeons of the Keepers, culminating in the Battle of the Deephold and the destruction of the death-cult.

A renowned battlemage and strategist; one of Arianwyn's lieutenants during the Elven Civil War. At the behest of Branwen and Tristan, Talhaearn led the assault on the Deephold, routing the Keepers and ending their evil death-cult. Elder brother of Fynnien's father Falerian.

Retrieved from "https://rsroleplay.fandom.com/wiki/User:TylwythTeg?oldid=160840"
Community content is available under CC-BY-SA unless otherwise noted.