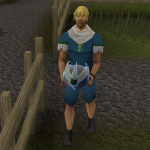 Hello. I'm Howdia, a roleplayer on World 42. I started roleplaying in mid-June 2010 in Conza41's Life of Ardougne sandbox roleplay. My claims to fame on World 42 would probably be roleplaying as a girl so well that some people wouldn't know that I'm a guy unless I told them, running the first land claims thread to become stickied and to exceed 2,000 posts from August 2011 to October 2011, and ruling Kharidia as my character, Emma Marie Genic, from March 2012 to June 2012. My most well known characters would probably be Holly J. Genic and Emma Marie Genic.

These characters are ones that I'm likely to hand to other roleplayers for them to fill (As long as they're active and would develop the character). Private message me in-game if interested in roleplaying one of them.

Retrieved from "https://rsroleplay.fandom.com/wiki/User:Howdia?oldid=94096"
Community content is available under CC-BY-SA unless otherwise noted.