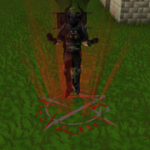 Haidar, my name is Aztar. I like to fly with castles, eat cake, and ride on my pet Kraken.

I'm Aztarwyn. That's what I am. Got a problem? Well FU-

Anyway, what up. I don't think I need to repeat for the THIRD TIME who and what I am. Now, where the hell did I come from? I didn't always role-play, of course, since I came across RuneScape in 2006-2007 and really started to get into it in 2008. It wasn't until the latter parts of 2009 however that I would discover World 42. Back then, W31 had started its intergration into W42 and I got caught up in the middle of it. Back then I lead a clan named the Kingdom of Zamorak, and at its peak we had well over 100 players within the clan. Exactly how and why I lead my clan to go to W42 is lost to me, but I'm pretty positive that I went to help Sir Tain Def against the Kinshra. Still, no idea. If you didn't know me well prior to reading this, you'll find out soon that my memory is absolute dogshit.

After I stepped down from leadership and had a few stincts in W42, I did make an account swap with my cousin. I'm gonna get that out of the way now. This account, Aztarwyn, is a newer account somewhat and is one of the last I've made. I use to have a nooby skiller and recently I've made a noob account, named Caewyn, to just have fun on. I don't transfer GP to my main, either. After I took the new account, which was Gangstagonzo, I was able to get back into the ranks of KOZ, although the clan had fallen since then and it was just completely dead. Once KOZ really just fell, I almost had nowhere to go. Exceeeeeept W42.

I really started role-playing under the account of Gangstagonzo in 2010, and yes, I did crash a meteor into Falador Castle during my rookie year(But truth is, I didn't fly away with a castle.) However, I was able to improve throughout the course of 2011 after beginning to use my old account Aztarwyn and eventually led a successful clan(that didn't break rules) named Vigilis Cruor and that would be red hot for the end of 2011. After February, I was all over the place, did a re-run of the Kingdom of Lionheart/Zamorak and eventually would start Das Kaiserreich der Cruor sometime around August. That was my last attempt at a clan and was my first go at a Misthalin empire, being fairly successful. Eventually as my interest in Runescape began to fade away, so did my activity on W42. After another resurgence in the fall and winter of 2013-2014, all and all nearing the summer I made my leave from what I thought was going to be Runescape. During the spring of 2015 I regained interest in the game itself and came back, hoping for a new start in role-play. However, much to my disdain, hardly anything had changed and quickly role-play was a turnoff for me. I still enjoy my private sessions throughout, however as of June 2015 I decided to retire from RP. Although I am a retired role-player, I will keep lurking around the wiki, making edits to my pages and engage in discussions related to RP and lore and have my own role-playing fun over on Skype or on RS with certain people.

Now, don't think that just because I'm retired that doesn't mean I won't role-play. If I think your RP is interesting enough and I've got the urge to just DO IT, I'll hop in! Of course, if you're interested in playing a character in my own RP or perhaps injecting a character of yours in it, we can have a discussion and see what I can do. If you just want to talk about life or talk, well, RS, just hit me up on the talk page so I can add you. Otherwise, you won't have much luck talking to me. You can add me on Skype, just let me know who you are or I'll be less inclined to add you.

Woot, characters! Characters in bold are, or were at one point, main characters.

Keep in mind, this may become outdated.

Here will list my characters that are currently living.

My shelved characters that are alive, which may be brought back to role-play.

Here is my list of deceased characters, which are mostly shelved, unless role-play depicts otherwise.

My characters that I do not use in active role-play, however are still active/mentioned and used for plot for my other characters.

Zephon Meceaus Gonzo - 38 - Deceased - Once believed to be Aztarwyn's father

Characters that are related to mine, or characters I own that I do not role-play

Here are other pages I've made and update regularly.

The Nation of Lionheart

Starting a Clan in Role-play

Timescaling is a confusing issue in the W42 community, yes, given it can be lore-bendy to change the years up in role-play, so we all set ourselves in Year 169 of the Fifth Age, now Year 1 of the Sixth Age, and our characters somehow age over the "years", when really no year has occured.

I go by Howdia's timescale, which is one year OOCly is 12 years, thus making 1 month to be a year. However, I also change up the years. My theory is that when the role-player had started role-playing, it was Year 169(Now can be considered Year 1) for them, and then their time-scale would take place. An example how this works. Aztarwyn was 55 when I had began to really role-play as him, and Rachel Gonzo was born when he was at this age. She was 18 during June, before I officially started using this time-scale in roleplay(Which led to a lot of revamp in my characters ages), thus the Sixth Age would've begun for me at Year 196 of the Fifth Age. While this is quite lore-bendy, it doesn't affect anything to do with public rp, and I use it solely for the sake of remembering how old my characters are and how old some other stuff are in my role-play.

I'll just say it because I know I'll get in trouble if I don't put this here, but there is some graphicish/offensive language used in this. So a disclaimer, if you don't like that $#@!, then you should be cautious. But if you don't care, welcome! As a retired public RPer, I still do find much enjoyment to RSRP in general, however my taste for the current public genre is very, well, shit. Due to my views on the W42 Community as a whole and the lack of well, anything interesting to me going on, I decided to retire. However, as I mentioned earlier that I was not entirely a retired RPer as I do like to RP within my own storyline. The catch is most people will regard it as custom content as it involves two player created land-scaled continents, its own religion and even(potentially) additional Gods and very OP characters. I'd say most people like to avoid it.

So, does that mean I label myself as a private RPer with a public status of retired? Yes and no, to be simple. Yes, I do RP in what is basically a private sandbox, shutting out the public RP's influence to a degree unless something was arranged. However, my RP does acknowledge the current status within the public RP, including all kingdom's and that jazz. So it wouldn't be uncommon to see me reference an RP group at a point in an article, say like the Kingdom of Asgarnia and maybe even a mention of their ruler during that time and even news such as the Battle of Port Sarim during the Siege of Falador event. I do this because I do want to be open to returning to public one day and toning down the OP of all the characters when they move outside of the box.

So, I said yes and I said no. Where does no come in? In my opinion, my RP can be acknowledged by other groups if they choose to. It can easily be translated to be perfectly legitimate within the rules of W42 public, say removing the gliders that are basically transport carriers and the basic cannon-tanks. Summarizing everything without including the OPness really does help. It's just a preference of whether other RPers want to bother acknowledging Cruor's existence. Do I/will I care if you choose not to? Not especially, so long as you do it in a respectful manner. I post my content on the wiki so I can easily keep track of all the information that goes on within the plots and avoid continuity errors. I'm also aware a few of you get a good read out of it, maybe not so much the recent content with all the bullshit drama around it. So you're welcome.

"But Aztar, will you join other private RP's?" That answer is still a maybe/IDK. It just depends if you have an interesting plotline and if I like it enough and like a position I'm given, I'll be more inclined to giving it a shot or doing a crossover with my RP. Just communicate with me, naturally.

So, let's say you decide to acknowledge the RP and acknowledge all existence of the plot and all that stuff. Congratulations, you're not a stuck-up elitist or- Oh I know I'm getting banned if I keep that going. You would also need to consider, how in the flying monkey orgy fuck(this is the part where I put that disclaimer up) does your character know of the events of the shit going on? For starters, Cruor can probably be documented SOMEWHERE. Nazshaar itself may be a little harder to get around, since Lionheart hasn't been relevant in public since like 2012. But hey, if you really cared that much(which you probably don't :/) you can always just ask me to add you on RS or some shit and well. We'll talk. Yeah. As for getting involved, you'd have to talk to me about that. I'm not too keen on when players try to force themselves into the RP(for anybody who remembers that "Fail of the year" candidate with Anglia vs Cruor, raise your hand and bask in the bullshit that was an invasion and my epic counter and somebody crying) and it will usually result in pure annihilation. And probably auto-hitting since you did just involve yourself without my approval. Sorry. But I hope you're cool enough not to do that.

Well that's that. I'll add more to this as time goes on, but I doubt I'll even remember it.

My photos for my profile use.

My wolf pack and I. We're all friends. 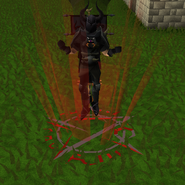 My opinion
Add a photo to this gallery
Retrieved from "https://rsroleplay.fandom.com/wiki/User:Aztarwyn_Gonzo?oldid=154158"
Community content is available under CC-BY-SA unless otherwise noted.