Start a Wiki
This page serves as a source of information about trolls as it is applicable to World 42 role-playing characters. If you or someone you know feels this page is incomplete in any way, please do not hesitate to contribute as best you can.

Trolls as a race seem to have very little known or noted history. The probable (but speculated) cause of this is that the trolls keep no written or oral records of their race. In addition, most humans who would record that history for them would have had prolonged encounters with trolls and probably ended up being beaten to death or eaten. It is also possible that there was once recorded troll history, but the documents were consumed at some point.

They are known to have been the descendants of native trolls fleeing into the mountains during the fourth era, when they were driven out of their homeland by the combined forces of the Kinshra and White Knights under King Raddallin, the founder and first king of Asgarnia. They have had constant conflict with Dwarven civilizations who fled underground during the God Wars of the third era.

This section addresses details about trolls that are widely accepted throughout the world 42 role-playing community.

This section addresses details about trolls in RuneScape that are still subject to speculation and discussion. This can be either because of conflicting information in-game or because use of the detail in role-play creates an unfair scenario (usually involving overpowering or another common role-play problem).

This section addresses traits that unexperienced role-players often bestow their troll characters but that aren't actually seen in trolls on RuneScape. When creating a troll character, be wary of these. 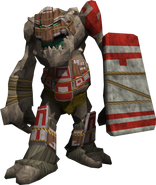 Cliff, larger than the average troll, but not smarter.
Add a photo to this gallery
Retrieved from "https://rsroleplay.fandom.com/wiki/Trolls?oldid=153864"
Community content is available under CC-BY-SA unless otherwise noted.