The Killer Rabbit is a reference character from a movie that was applied, by Raltin Avarr, into RuneScape for a reenactment.

Fremennik Province, Outside The Slayer Dungeons

The Legend Of Fluffy Death

Some say the beast followed King Arthur into the realm of RuneScape when he left the fabled land of England, others say it is the spawn of Zamorak, and there are whispers that it is the Evil Chicken in rodent form. Wherever it came from, it is a creature of pure evil, and guards its cave with fierce determination, slaying any who come near...

The holy grail has gone missing once more, and it is up to the King Arthur and his knights to find it again! They shall travel across Gielinor in search of the lost artifact they once held, and make some surprising tales to tell to their children!... should they return alive that is...

A Parody In The Making (Rp canceled for now, interest has yet to spark)

An extensive parody reenactment is being planned by Raltin Avarr to bring the comedic story of Monty Python and the Holy Grail to life in RuneScape roleplay, where it will be life or death for the knights of King Arthur as they scour the land of Gielinor in search of the fabled Holy Grail.

Any copyrights are reserved by the original creators of the film of which this roleplay storyline will be mimicking but not copying, no profit will be collected from said storyline and is purely for entertainment use. 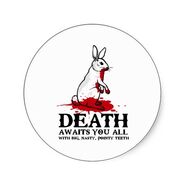 Add a photo to this gallery
Retrieved from "https://rsroleplay.fandom.com/wiki/The_Killer_Rabbit?oldid=134061"
Community content is available under CC-BY-SA unless otherwise noted.