One day, this creature appeared in Morytania. Nobody knows where it came from, but everyone knows that this creature is nothing like what exists on the face of the planet. Many compare it to a Shade, and they are right to do so, no matter how wrong they might be. This character was created with the purpose of fighting overpowered characters before they get powerful enough to be overpowered, despite being perfectly balanced. This character is currently owned by user Startraphell.

The Echo is best described as the stereotypical "mysterious, brooding, hooded figure". It stands around 9 feet tall, and is covered from head to toe in a dark cloak composed entirely of shadows. Under this cloak is a mass of shadows, and under that is a mass of nothingness. The Echo moves around by sinking into the floor and traveling along it at the speed of a shadow, which is equivalent to the speed of light, allowing it to seemingly be in two places at once. This method of travel has proven to be quite startling for many people.

In battle, the Echo drops the cloak, leaving only the mist of shadows around the nothingness at it's core. In this form, it travels around by a combination of floating and walking.

It is not known, nor is it important as to what the Echo did before coming to Geilinor. All that is known is that it arrived one day, in Morytania. The date itself is unknown, as the Echo spent a short time as an incorporeal entity, then a period of time within the shadow realm. During this period of time, it stalked various creatures, all of them very powerful. It was looking for something, but it is unknown what.

During the Invasion of Falador, the Echo made it's first public appearance at the Canifis inn. It carefully observed several individuals before vanishing. It's next appearance was in the inn once more. This time, it met a powerful Mahjarrat trickster and shadow manipulator named Kax. It quickly grew annoyed with the creature. They would meet again several times. Most notably in the Kinshra camp outside the northern Falador wall, where it invented the nickname "Slug" for the Mahjarrat, saying that that is what her name translated to in a forgotten language

When the C'thonian, Seaver gained ownership of the Jolly Boar, the Echo arrived, introducing itself, and causing a bit of a panic among the patrons. It then informed the C'thonian that it was interested in them, and would be observing them for the foreseeable future, calling them an "Oddity". Shortly after, it began to be seen around the bar, bartending. It is unknown as to why it chose to work at the inn, or what it is getting out of it.

The Arbiters of Honor

After a few months of bartending at the Jolly Boar externally, and fighting evil from the shadows, the Echo met an interesting bounty hunter named Val Caistlyn, who mentioned that disappearances were occurring on the island of Ashdale. After several weeks of preforming duties, the Echo set off. When it arrived, it discovered that a group, lead by the aforementioned bounty hunter had made it to the island before it, also investigating the disappearances. After a brief search, the Echo concluded that the people had not been simply kidnapped, but removed from their residences without a trace. As it observed, it saw the group gather, notable without Val. Therefore, when the group heard a scream and chased after it, the Echo set off in the opposite direction, aiming to locate Val, hoping that the group could handle whatever had come up. It found Val drowning, and promptly rescued her before seeing quite visible flashes of red lightning coming from the church. It left Val there of a rock before going in.

There, it found the group having a very one-sided battle with a powerful mage and alchemist. This man, was Malus. Malus easily overpowered the group, before noticing the Echo. He then promptly declared that only it was worth his time, before engaging. The Echo fought furiously, however, Malus parried every blow with great ease, showing no sign of tiring down. The Echo finally managed to land a blow as the alchemist got distracted by a fleeing member of the group. At this, Malus got enraged, and hit the Echo with a powerful bolt of energy, draining it of most of it's power.

Amazingly, the Echo managed to survive, but was heavily weakened, no longer being able to use even a fraction of it's power. At this point, Val had returned, claiming to have no memory of who knocked her out. It was then that she decided that the group, the Echo included, should return to the main land, and plan out how to defeat this Malus, and bury what remained of the captain of the ship that had brought them there, him having been a casualty in these events.

Creation of the Arbiters

Soon after the Ashdale incident, The Echo, the young Pyromancer named Subaru, the warrior Karma, and the mysterious Val Caistlyn met at the Poison Arrow Inn. They all sat down, and began to discuss the threat of Malus after a brief moment of grieving over the death of Val's old friend. There, they came to the conclusion that they would not be able to take on Malus as they were.

The Echo, quite seriously, suggested that they form an army to deal with threats like this. Not even necessarily an army. More of a guild of people who would be willing to do good when asked upon. After a short session, the four came up with the name they would go with. The Arbiters of Honor.

Soon after, they met again in the home of Val herself, where they signed the charter, and officially formed the guild from a legal standpoint. Since that point, a solid number of people applied to the guild. The Mahjarrat Sarah, a void knight, a vampyre-turned-human, a former member of the Kinshra, a mysterious swordsman named Reaver, among others.

-This part will be detailed as soon as it is played out. I am leaving it here instead of later as it has relevance to Malus.-

A Disturbance In the West

It was soon later that a strange new threat had showed up. For a while, the Echo had been corresponding with a man who believed that he had unearthed something that he was not meant to see, and feared for his life. As such, the Echo remained in correspondence with him, hoping to figure out what However, soon after, the letters stopped. The Echo went to investigate, only to find several possessions of the man, and nothing more. These included a journal, describing a slow descent into madness after what he had seen.

Puzzled, the Echo went back to the Boar, and requested a job from them: To find out what had happened to the dead man, which the Arbiters accepted.

With the existence of a great multitude of alternate universes, the Echo has bound to have made an appearance in a few.

In the Otherworld sandbox plot, the Echo serves as a more traditional protagonist, saving the world several times from great threats. In this sandbox, the rest of the Echo's race is much more prominent. In addition, it is also a comical character. Sadly, this iteration of the Echo was never truly finished, as Startraphell chose to leave the roleplay.

In this alternate universe, the Echo is one of many shadowy creatures, specifically designed for the plot. This is worth mentioning, as this character's persona was developed from this private plot.

Though it may seem sinister and brooding at first sight, the Echo is actually quite friendly, and curious about others. The Echo despises violence, resorting to it only if there is no other option. It treats those that interest it with great respect, and those who have decided to hinder it with great hostility. Despite it's friendliness, however, it should be noted that the Echo has a hard time understanding social customs, making honest remarks that might seem rude, or offering advice that might be uncalled for.

The Echo is capable of manipulating shadows to the point of mastery, able to solidify the substance with relative ease to a point of being able to break through steel with it. It should, however, be noted that the Echo cannot use any other form of magic. It has also been known to express itself through shadowy icons above it's head.

The Echo constantly emits cold around itself. It cannot control this, but it can use it to it's advantage. By constricting itself around a body, it can slowly freeze the victim, allowing for an ideal torture method.

The Echo seems to have immense knowledge of magic, languages, and lores of various cultures. It has shown to be able to translate an unknown language that it had never seen before in seconds by piecing together roots and symbols from languages that it did know.

The Echo, lacking a voice and face of it's own, uses a great variety of voices in a constant, and expressive state of an emotion to convey it's feelings and expressions. These voices are not unique, however. The Echo is capable of mimicking the voice of a living being almost perfectly. However, these voices lack any form or resonation. As such, the Echo cannot say, mimic an elf's hum to crystal sing. 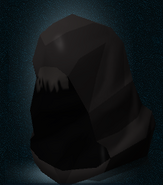 Retrieved from "https://rsroleplay.fandom.com/wiki/The_Echo?oldid=151470"
Community content is available under CC-BY-SA unless otherwise noted.