The Bandosian-Armadylean Conflict  is the role-playing representation of the events during The Bird and The Beast ('BnB') in-game world event. The two main participants and their representative factions are Armadyl and Bandos.

Armadylean forces are composed of followers and supporters who believe that Armadyl should come out the winner. They have divine seekers and trained fighters as body guards, a golem, a self-constructed machine to help attack or defend convoys.

Bandosian forces are composed of followers and supporters who believe that Bandos should come out the winner. They have divine seekers and trained fighters as body guards, a golem, a self-constructed machine to help attack or defend convoys.

They are composed of the united forces who have banded together to defend their cities and towns from the two gods. They are a mix of those who are either knights or guards of the threatened cities, or supporters who believe their god should have their war away from the cities. Some of the Godless have also volunteered to help them.

At the immediate moment, Sliske does not employ any active troops in this conflict. However, those affiliated with Sliske occasionally underhandedly trick Godless troops to ambush one side or the other, and offer golem parts to the two warring factions.

The Godless have taken a more direct role in the second major battle of the Sixth Age between Armadyl and Bandos. Members of the Godless ambush caravans belonging to the stronger of the two factions in order to prevent one side or the other from gaining a stronghold in the region. At times, they also offer a temporary truce to the combatants. They also aid the Defenders of Gielinor to keep the gods from gaining control over a city or town.

A small and curious, yet ferocious faction, the Tuskan forces are made up of numerous beings formerly in the service of Bandos and other Gods who have seen the power of the Airut and wish to thrive in Tuska's glory. They bear no leader and will work as a group to cause chaos for their porcine Goddess.

A small, dedicated faction, made up largely of ambushers. Largely made up peasants armed with nothing but rocks and pitch forks, who harry convoys and deny other factions of resources. Largely disorganised, except for the professional element of the Kinshra. They serve to disrupt, rather than to win, to regain some honour and wipe the smug look from Saradominist faces after the Battle of Lumbridge.

Please specify if you were at the events and not in any of the factions mentioned above.

As the fight for divine energy continued, the forces of Armadyl turned their gaze upon the forests of Misthalin. West of Edgeville, a concentration of divine energy built, enough to give the Bandosians or the Armadyleans a fair boost. Both armies marched to this point, to fight it out on behalf of their God.

The fighting opened with a group of Bandosians fighting the White Knights (under Commander Sir Bool Cowbra) and Anglian forces (under King Corvus) that had been ordered by Commander Alexander Aerendyl to secure the energy source on the hill. Soon the Godless jumped in to ambush both sides, which lead to the White Knights fighting on all fronts and leaving them pinned down. Bandosian infiltrators surrounded and assaulted Gunnarsgrunn itself, where some energy was found and taken by a black garbed occultist of presumed Kinshra origin. The conflict in the forest was brutal, and the Godless were seemingly to be tied with the White Knights, however as the Armadyleans overcame the Bandosians in the village, they managed to force back Bandos' forces and the Godless soon also vanished after a arival of some unknown ambushers. The Armadyleans held the hill until the unknown ambushers, who were the known as Worshippers of the Dragonkin ambushed it, with the remainder of the White Knights retreating.

With the Armadylean forces diminished and fatigued, Commander Aerendyl conceded the battle and agreed to surrender, on grounds that the Worshippers not attack their wounded and innocent. The field hospital in the Gunnarsgrunn Longhall was evacuated to Varrock Square, with the Armadylean forces soon also retreating there. The Battle of Gunnarsgrunn was thus concluded with a Worshipper victory.

In the aftermath of the battle, Medea (A Worshipper Epimethean) attempted to assassinate Commander Aerendyl through gifting an agitated black salamander delivered by a healer.  However, the Salamander did little more than wound Alexander's pride as said healer helped him recover from the burns to his hand.

The two factions, that of Armadyl and that of Bandos, had prepared for an exception mission - a huge cache of divine energy was being released by the world just north of Draynor. Upon hearing reports, both factions sent large detachments from camps to the site. The two convoys marched from their respective camps, all but overburdened with diviners and bodyguards, ready for the inevitable conflict with the opposition.

As well as these, the Godless moved out to prepare an ambush for both factions, aiming to take them by surprise and stop them from collecting the energy. Unawares to any faction, the Kinshra Knights had decided to make an appearance this time, to stop the Armadyleans and their Saradominist allies from collecting the divine energy. The Godless ambushed the Armadylean faction north east of Draynor, and as the convoy halted to combat this threat, the Kinshra unleashed unholy fury into their rear. The Armadyleans suffered a brutal ambush, most of their combatants fleeing as the combined Godless and Kinshra efforts ploughed through their ranks. A second detachment of Godless ambushed the Bandosian convoy but they were too late to stop it reaching the site, they were already collecting the energy. The Godless, with the unarranged aid of the Kinshra, were able to defeat the two factions. The Armadylean convoy was swiftly beaten and crushed, forcing their remaining forces to retreat in disarray. The Bandosians succeeded in collecting the energy, but they did not make it back to their camp.

The battle resulted in a Godless victory. This is perhaps only due to the interference from the Kinshra Knights and their victory over the White Knight contingent, as it was unclear whether the Godless were stronger than the Armadyleans or not until the Kinshra entered the frey.

After the battle, the Godless went on to collect some divine energy, in order to continue research on its properties and uses.

The Depths of War

After their shocking defeat at the hands of the Godless and Kinshra ambushers, with the defeat previous at the hands of the uninvited Worshippers, tensions were high between and within both factions. The Bandosians grew desperate, looking for a chance to gain any tactical advantage they could over Armadylean forces. Eventually, they found something with potential. They stumbled upon the dwarvern tunnels which led into Falador, but these tunnels, however, were also known to and defended by the men and women of Justice.

Armadylean forces had grouped at the entrance to the tunnels, within the walls of Falador, eager to defend the city and claim the tunnels as Armadylean territory, for their own advantage. A large attacking force had been spotted moving from the Bandosian war tower by aviansie sentries, it's path crossing far too close to the dwarvern mining camp for the forces of Armadyl to think it to be coincidence.

The aim of both sides was to take the tunnels. For the Armadyleans, it provided them with quick access to the Bandosian stronghold, for the Bandosians, it would allow them to penetrate Falador.

With the clattering of steel and the roar of war cries, the two factions march towards each other through these tunnels. Isolated from reinforcement and in unfamiliar territory, the expansive depths of these mountains sets the stage for one of this war's bloodiest battles. The battle broke out in the middle of the tunnel, with the Bandosian making the first move. The battle became the most bloodist battle known yet, the Armadylean seemed to have the upper hand, as they had a golem to aid them, but the Bandosian gained the upper hand once their line was broken and the Golem destroyed. The battle resulted with a Bandosian victory, as the tunnel became theirs.

After the victory the bandosian had gained in the tunnel, and their enemy's golem, they feel confident once again. Some bandosian moved back to base, as a few stayed behind slowly digging the blocked tunnel that leads to Falador. Tuska's followers meet up with the returning forces, just a few trees outside from the bandosian camp. Both agree for a small term alliances. The Bandosian now plans to aid the Tuskan to raid the Edgeville Monastery, for their goddes, in return, the bandosian are able to take it over for the time being, making it into a headquaters, and a close travel to edgeville for the divine energy. The Defenders are preparing, as a scout notice a few unknown creature having their camp set up at Ice Mountain. They notice a giant figure coming, knowing this, the scout(s) head back to warn their faction.

In the monastery, a chant of "Tu-ska" was heard, the raiders got ready and attempted to block both entrances. The defenders rushed in and with their demon, Graffle. They attacked from the northern side of the monastery, as the building partly collasped, and monks feeling from the opening. The battle was shown to be brutal, and very bloody. The raiders had their hands on a very dangerouse creature, known as an Airut, who was chained, and guided by the Tuskan warrior, Mudbrain. The raiders and defenders were both tied in combat, until a wight appeared and started manipulating the battle, teleporting the Airut and in hopes to damage it. Soon a small force of Zamorakian interfered, and battled a few defenders. The battle soon turned after the wight's interference and attacked Graffle. Both the Airut and Graffle were unable to battle any more, causing the two sides to fight a with out their creature to aid them. The wight had injured several defenders before leaving.

The battle resulted in a defenders victory, in trying to avoid a god's faction to gain control over the monastery. The Zamorakians were able to completely burn the entire monastery down.

Finally, the end was here: Bandos, the god of war, was defeated; killed by Armadyl's weapon, only his stone head remains. Armadyl left, taking with his followers and the dead god's mace.

While they didn't gain much from the conflict the Armadylean forces did manage to collect some divine energy, and were able to aid their god in the defeat of Bandos with it.

Despite their best efforts the Bandosian forces lost their god, but were given better access to Falador via underground tunnels.

Although the Godless were not officially engaged in the conflict, they successfully hindered both sides' convoys, and kept one side from gaining a headquarters in another location.

Sliske's followers didn't interfere greatly, but they did manage to wound several forces, while also "aiding" them as well.

Just like they hoped for, Tuska's followers were able to cause wanton destruction throughout the conflict.

Armadyl atop his tower. 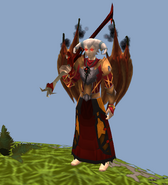 Bandos and the Scarecrow atop their tower.

A Grave of an unknown Bandosian soldier who perished in the Bandosian-Armadylean conflict sits silently in the dark woods.

Bandos destroyed remains.
Add a photo to this gallery
Retrieved from "https://rsroleplay.fandom.com/wiki/The_Bandosian-Armadylean_Conflict?oldid=155986"
Community content is available under CC-BY-SA unless otherwise noted.