The Asgarnian Army Enchiridion or A.A.E. is a 250 illustrated page manuscript compiled under the Council of Sir Amik Varze , penned by Sir Braddock Kohtlund & Sir Vye Ver , and published by The Gielinor Times Publishing Co. The book contains the knowledge necessary to an enlisted White Knight both on and off the field of duty. Currently, as of Year 1 of the  5th Age, the Enchiridion has undergone three revisions, making it the third edition. The Enchiridion is first issued to either Peons or Squires upon their entrance into the White Knights and serves as their reference book throughout their entire career as a knight.

Typically, the A.A.E. is printed in a paperback format for a lightweight and flexible constriction that is convenient for use within the field. The Enchiridion has also been printed in hardback formats, especially for special edition that was sold for the Pentasgarnian Soirée .

The first edition of the Asgarnian Army Enchiridion was created by the original founders of the White Knights of Falador, basing it off of the works of the Patriarch of Knighthood, Sir Aduhlay Dohmein. The Enchiridion served as the guide for all foundations that were incorporated into the order until vast amounts of the works and records of the order were mysteriously lost to an unknown reason.

This version of the Enchiridion focused heavily on topics such as obeying the proper Saradominist Knights' Code, while encouraging knights to go beyond the teachings of Sir Dohmein. Bound in hardback leather, and printed specifcally in the White Knights' Castle by newly emerged printing presses, the cost of production was outrageously high, soon forcing the order to seek alternative means of production. After some time, the court mages of Falador began to study means of magically printing and duplicating written productions such as book, which greatly helped cut the costs of Enchiridion printing.

The Asgarnian Army Enchiridion was soon discontinued in the leatherback format and turned over into a lightweight paperback format, which was found to be much cheaper and conventional for distribtution amongst the Asgarnian Knights. Due to this, the leatherbound version of the book is now considered very rare, with only a few left to be known in existence and acceptable condition. The leatherbound Enchiridion is highly sought out by collector throughout Gielinor for this reason. Currently, five copies of the original Enchiridion are known to be under lock and key in the Castle of Falador. One is in the hands of Reldo, the Varrockian library. The remaining copies are in the hands of private collectors or have been lost or since destroyed.

There are no longer any known copies of the original Enchiridion in the paperback format in existence. All have likely been destroyed over time due to their heavy use and reguklar disposal by their owners.

The second edition of the Asgarnian Army Enchiridion began works in 165 of the Fifth Age by a White Knight Lieutenant named Sir Bool Cowbra . At this point, the order had gone nearly twenty years without an official physical compilation or regulatory protocol. This was seen as something that was long overdue for a restoration, causing him to begin working on his project very early on in his career as a White Knight.

However, around the time of Sir Bool's promotion to the rank of commander, he become extremely busy and stressed with his career, forcing him to put his project on hold until he would be capable of finding time to continue it. After seeking help from one of his captains, the Enchiridion progressed further in its path toward completion until Sir Bool's death in Year 1 of the 6th Age. Due to his unexpected and sudden death, his beginnings of the project were majorly unknown to the order until his cousin, Sir Braddock Kohtlund, recovered what was completed with the book and began to recompile and rework it shortly after he took his role as a White Knight Commander.

The second edition of the Enchiridion was never finished nor made public to the order as a standard issue set of protocol.

Not long after the A.A.E. was discovered to be in the works by Sir Bool, Sir Kohtlund recruited the help of his trusted co-commander SIr Vye Ver. The two began to continue the progress to the book, eventually bringing it to the attention of the council of SIr Amik. The council approved of the project and began to set forward the required information to be collaborated for the project. Not long after the information was collected, the book was formatted and compiled into a manual, being editited mainly by Dame Erin Ayge and SIr Vye Ver.

In the beginning of Bennath, Year 1 of the 6th Age, the Asgarnian Army Enchiridion, Third Edition, was completed and contracted to The Gielinor Times publishing company for a series of prints. The prints were then issued to every unit serving in the Asgarnian Army as a standard issue handbook being called the Complete Handbook to All Applications Within the White Knights of Falador.

This being the current edition of the Enchiridion, the topics are heavily related to the ones of the original, such as the following of the Knights' Code, which still pretains to the normal livelihoods of every proper White Knight in the order today. The Enchiridion now serves as a progression and reference book for every unit. Along with being based off of the original transcript, the book also focuses on topics such as expectations for every single knight and their job, weapons and equipment, formations, and many more guidelines for knights.

The A.A.E. could be accessed through different means of availability. It was available in a hardback special edition print and a paperback standard edition print. Currently, only the PDF version remains accessible.

Printing of the A.A.E. has since been discontinued.

A free version of the Asgarnian Army Enchiridion can be viewed in a PDF format.

To view the free PDF,CLICK THIS LINK.

Below is a gallery of some of the illustrations found within the book.

A Ring of Life 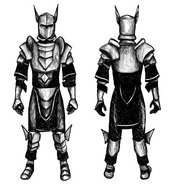 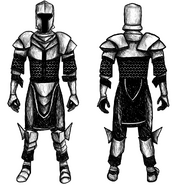 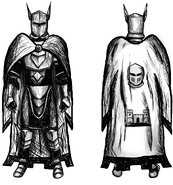 Retrieved from "https://rsroleplay.fandom.com/wiki/The_Asgarnian_Army_Enchiridion?oldid=148679"
Community content is available under CC-BY-SA unless otherwise noted.