Tenzuu (TEN-Zoo) is a role-playing character played by Junokkra. It is highly recommended to read the lore of the orikin people before reading this article.

Tenzuu is an orikin. If you would like to read more information about the orikin and their home world Omesa, click here.

The date of when Tenzuu was hatched is uknown.  During three hundred years of his life, Tenzuu spent his life learning from the eldest orikin, Tsuthau. Tenzuu learned powerful shadow magicks and other form of magic from the elder. It is unknown what happened to Tsuthau, at this time. He then travelled the small world, communicating with many other orikin, and getting to know his way around Omesa.

During his travels, Tenzuu became very well known. Not only for studying with the eldest orikin, but just for getting around so quickly and accelling in magicks far passed the others. Eventually Phenaxuh made his home in Mothe'Abnu, a dark city under the planet's crust where Moto Orikin mined into the coal rich ground. Tenzuu watched the small city fade away as he stayed, being one of the few Ras Orikin there. Soon the city became desolate, but Tenzuu didn't mind. He locked himself away for years and years.

As Tenzuu studied under the planet's ground, in the abandoned city. People forgot about him. Say another thousand years passed before anything interesting to him happened, as all he could hear was dustruction from above. Soon the destruction from above grew quiet after a year, or so.

Orikin started to pile into the old mining city slowly. Tenzuu watched over the years as the survivors made a new home in the underground city, as it was the only safe place on the planet. With Tenzuu being a native to the city, he began to lead the others.

Tenzuu led the Orikin and soon developed a council to help him run the city as it became large and alive again.  But Phenaxuh became more interested in developing a way out of the destroyed world above. He began to dream up ideas of other planets, and other beings other than the orikin. He started to focus too much on his work. Slowly fading away from the great leader of the mining city. He stepped down from the position and fully let the council take his place as he worked on his own ideas.

Corruption in the City

As the council grew, is became more corrupt. orikin began enslaving orikin, and the city fell into a pit of death and darkness. The streets became deadly, and the council was behind everything. Though the council was resposible for almost 100% of orikin crimes, they were getting away with it. The last of the orikin race was falling apart rapidly.

With the race rapidly declining on Omesa, Tenzuu felt obligated to help his people. He worked and worked, locked away in his hidden labs. He knew the council would try and stop him, as they found out about his plans and labelled him as a criminal.

Eventually he developed a portal system to lead anywhere, though he did not know where it would go, as it was completely random. He kept the portal inactive but ready when he was. He spread the word to his closest supporters, though anyone to be found talking to Tenzuu was to be arrested by the council. Eventually word got out, and Tenzuu had to act fast. He left hidden clues to the ones he trusted in his world, and readied himself to leave.

Tenzuu left on final note before leaving his world, translated to "I will return". As Tenzuu activated the portal, it immediatly threw him into unconsciousness. Not knowing if he was dead or alive, he awoke in a strange, green, life filled world. This was his first moments in Gielinor. It was fairly obvious he entered his way through the days of when the Portal of Life was active, and Tenzuu had no intention finding such a great planet.

The exact date was Tenzuu stayed out of sight. Finding a cave in the north east after he travelled the world. He was the master of disguise and deception on this world, using is advanced magicks to assimilate and conform to the humans, dwarves, and other peaceful creatures. He learned the ways of these creatures and studied their language. Eventually, with practice, he picked up the common tongue. Though he still is a bit rough with it, he began to communicate with others. But as fighting and violence broke out on Gielinor, Tenzuu declined into an underground cave system, hiding himself away from the others for centuries. This is where he "froze" himself with his own magicks, preserving his knowledge for a later date. Where he would be awaken by his own kind on the new world, or until his magical absorption ran out.

Years and years passed. The idea of the great Tenzuu faded away as the orikin people slowly declined. Omesa was filled with death and agony, though for thousands of years, the orikin survived. Tenzuu was nothing but a mythe on that planet by now, known by his foke lore title "The Realm Jumper". The portal was left untouched and stayed active until the portal of life was closed.

The Fifth and Sixth Age

Tenzuu awoke halfway through the Fifth Age, where he began to work and study, trying to figure out a way to directly connect Gielinor and Omesa. Phenaxuh did not leave his chambers until the beginning of the Sixth Age, where he felt the preasence of a new energy after the death of Guthix took place. He travelled, absorbing the divine energy from its thresholds. Tenzuu believes that the energy from Guthix is the key to connection the two worlds, which is what he is trying to do nowadays.

Tenzuu usually is in dark black/red robes, to help him conduct magic better. He also wears a series of gold plates, as he's taken a liking to the metal during his visit on Gielinor. Most notable is the gold mask he purchased before freezing himself.

Tenzuu rarely carries any weapons at all, as it was a sign of hostility for an orikin to carry a weapon on themselves. 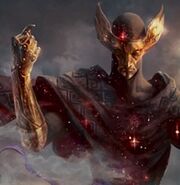 The portal Tenzuu used to get to Gielinor.

Tenzuu in his usual attire.
Add a photo to this gallery

- The artwork for Tenzuu is the draft and official art for a MTG card name Phenax, The God of Deception. Drawn by Ryan Barger.

Retrieved from "https://rsroleplay.fandom.com/wiki/Tenzuu?oldid=137177"
Community content is available under CC-BY-SA unless otherwise noted.