Page under construction. More to be added as stories unfold.

A lone woman, clad in an off white, slowly took step after step on the red earth. The air was perforated with a distorted sort of aura; this was clearly not Gielinor. Alien creatures poked around corners of what can only, for lack of a real name, be described as rock, and odd tendrils sprouted from the ground.

The woman's lips bore a stern expression, the rest of her face hidden beneath a hood. Black, feathery wings sprouted, detached, from her back, covered by a white cloak bearing the symbol of a blue mage's hat. In the woman's right hand was a menacing black staff, the crown of which burned with infernal energy.

Something in her chest bulged and move, and a faint smile grew on her face. She looked down to see the fat little raven chick she kept in her brasserie; the small, innocent creature began to cheep, its little stomach yearning for fresh food.

"Here you go, young one." Slender fingers dropped a scrawny worm into the baby's eager beak; it was swallowed without hesitation.

The woman's voice was gentle, peaceful, happy - all stark contrasts to most of what she had felt for the past year. This is it, she thought, stopping. Before her, encased in ice, was an old, dead White Knight, a knight she recognized as Sir Amaroth, impaled through his armor by an ancient Zarosian staff.

"This is her work", the woman quietly whispered aloud. Her lips curled into another small smile, but only briefly, for as she laid her hand on the ice, a vision like several she has had before struck her.

Countless images of destruction and gods that have not been seen for many an age flashed through the woman's mind, until she heard a familiar female voice: "Regrette, would you please be a dear and save the world for me? I have other matters to attend to." 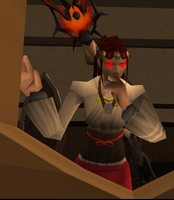 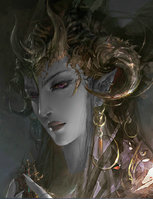 Praetor-Hierophant Faeyrin Inimica
Add a photo to this gallery
Retrieved from "https://rsroleplay.fandom.com/wiki/Temple_of_Autumn?oldid=142744"
Community content is available under CC-BY-SA unless otherwise noted.