Strithac the Archivist is a dragonkin of the Dactyl faction who spends the majority of his time observing the universe through scrying; recording the history of the current cycle in specially made orbs (similar to the one used to record the Wise Old Man's robbery of Draynor Bank) which are stored in his great archive. His self-proclaimed duty is to maintain records on the dragonkin race through his archive, which is located and hidden somewhere deep within The Abyss. Played by Raltin Avarr.

Strithac's days started on the dragonkin homeworld before its destruction at the hands of the Elder gods, where he proudly served as a scholar and scientist, which all changed by the cruel hand of fate when his world was brought to an end. He escaped the destruction of the homeworld by fleeing to The Abyss, as did others, but this journey did not come without its scars; as his own daughter died from complications soon after the escape, and without access to medical equipment she passed away in his arms. He went on to survive without her in the detritus of The Abyss, and when the other remaining dragonkin sought out Jas for retribution or mercy, he was cursed along with the rest of his race. Thousands of years have passed since then, and he has made many attempts to find a way around the curse, with no success. As time passed, he returned to the scholarly duties he preformed before the revision, and began recording the history of the new cycle.

Besides keeping records of the history of his own race, he began to record the history of the new, young races he encountered. His interest in cataloguing the life of the current cycle soon became an obsession; as he started to collect specimens and add notes about each new race he encountered to his laboratories. These notes end up being stored in a large laboratory he built in The Abyss, named "The Archive", which is his main laboratory and where he keeps records on nearly every subject that he deems of interest. The way he stores these notes is with special orbs made from orikalkum (dragon metal), rimmed with dragonkin runes and glowing like a warm fire with the magic contained inside.

Despite his scholarly interests, he has not forgotten about his duty to contribute in finding a way past Jas's curse. Unlike other Dactyl, he has not taken a biological approach to the issue, but instead attempted to create artificial progeny, such as golems and other constructs, and imbue them with dragonkin memories. When those efforts were met without success, he began turning towards the idea of using divine energy to literally create new dragonkin, which thus so far has been met with failure yet again, although it has managed to produce some very interesting results that he has continued to experiment with.

For a more in-depth view of his history, from a first-person narrative perspective, click here to view his archived journals and notes.

This section contains small pieces of history which were not large or important enough to be added to the main section.

Strithac, like other Dactyl, is not one to leave home very much at all, and prefers to stay in the safety and solitude of his laboratories and hidden dwellings. He is melancholy at best, but is not one to dwell in self pitty, preferring to busy himself in recording history and tinkering with technology. He is quick to anger when disturbed, and does not easily let grudges go. He does not have much emotion besides anger, and often keeps his feelings dulled to maintain an intellectual demeanor; being straight forward and bluntly to the point in conversation, as is common for his race, not that he talks very much. Although seemingly healthy mentally, the death of his daughter left him with some emotional and mental scars, as she was very close to him. As another dragonkin, Kerapac, directs his entire focus to curing the dragonkin of Jas's curse and their fertility issues as a coping mechanism to said curse, with each false user motivating him and hardening his resolve; Strithac has his own ways to cope as well. Strithac's obsession with artificial progeny is part of a desire to bring his daughter back, and his recordings of history and specimens within his archives gives him a sense of purpose and normalcy that he lost with the destruction of his homeworld; both of these things help him cope and deal with life on a daily basis.

Strithac could be devestating in combat as other dragonkin can be, having all the power and destructive abilities that is standard with his race, but as a Dactyl faction member he refrains from doing so; preferring to remain hidden and make his own advances in the fields of magic and science instead. He is a great thinker and technological genius, and has mixed many aspects of magic and science together in the majority of his experiments; his archives being a prime example of this. He is not much of a genetic researcher, and has not produced any biological creations worthy of note. While he is not much of a geneticist, he has skills in biology and anatomy, aiding him as a healer, and is an admirable architect. He possesses an aptitude for illusion based magics, allowing him to fool others and helping him get in close when he needs to be somewhere in person. 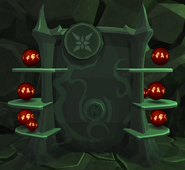 An orb shelf in Strithac's Archives. 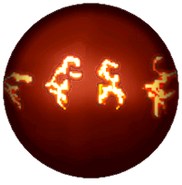 A close up of one of the orikalkum recording orbs.

Karsith, Strithac's closest associate.
Add a photo to this gallery
Retrieved from "https://rsroleplay.fandom.com/wiki/Strithac_the_Archivist?oldid=152072"
Community content is available under CC-BY-SA unless otherwise noted.