This page addresses information about Sliske, his religion, and his followers as it applies to World 42 role-playing. Any valuable contributors are welcome to contribute, especially as new content comes out in-game.

This faith believes Sliske to be the newest and most powerful god. Even with no proof of Sliske to be a god, this page operates on the assumption that he has ascended.

Sliske (also known as Sliske the Serpent-tongued) is a Mahjarrat who's speculated to have ascended to godhood after slaying the god Guthix with the Siphon, an elder artefact (also known as the Staff of Armadyl). While he has stated that to the world guardian that he didn't become a god, it's very rare for anyone else to know this. Sliske has gained a significant increase in power following Guthix's death, but did not become a god.

Sliske, a former Zarosian, has since been ex-communicated following Zaros' return. He's infamous for being cunning, manipulative, and dangerous. In particular, he was recognized even before godhood as a master of shadows who moved seamlessly between the natural world and the Shadow Realm.

At some point after the events of Ritual of the Mahjarrat, but before those in the World Wakes, Sliske managed to capture Strisath, the Dragonkin who carried the Staff of Armadyl, within the Shadow Realm. Sliske accomplished this by luring the Dragonkin after using the Stone of Jas, an elder artefact known as the Catalyst. Prior to capturing Strisath, Sliske managed to aquire the Stone by searching in a few varying locations.

When Sliske slew Guthix with the Staff of Armadyl, he gained a great deal of power from the dying god of balance. Up until this point, Sliske was already recognized as a being of power and importance to those who dwell in the Shadow Realm through which he often travelled.

Those who revered him recognized that Sliske had new and immense strength, obtained in the same way as Zamorak did from Zaros and many other gods before them. It was at this point that some began to recognize him as a god and take to worship. He dubs his followers "members of his fan club".

The religion that worships Sliske was first brought to RuneScape by a loyal emissary known as Relomia.

Now, Sliske has started a contest; to slay the most gods before the total eclipse of Gielinor's sun. The winner gains the Stone of Jas, but many characters who know of Sliske would be wise to speculate on the nature of his game.

Following the death of Tuska, Sliske erected his own twisted version of the Sword of Edicts in the centre of the Grand Exchange to get the denizens of Gielinor talking about his contest. Known as Sliske's Scoreboard, God Scoreboard, or just Scoreboard, it features a number of masks representing the known gods participating in Sliske's contest and with their respective scores. Following the end of his contest, Sliske's death was known to the world.

Sliske's faith will likely be based on his ideals. Sliskeans will not trust anyone who is not blind to their control. Everyone is a stepping stone to greatness; they are there to be used at their disposal. Lying, deceiving, and tricking people into doing what they want, to better themselves.

Keep in mind, this is purely speculation to not only a forming faith, but one with little precedent in-game.

Sliske before he killed Guthix 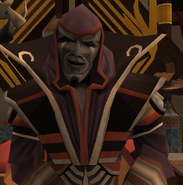 Sliske, discussing his contest with the other gods.

the symbol of Sliske's religion
Add a photo to this gallery
Retrieved from "https://rsroleplay.fandom.com/wiki/Sliskism?oldid=154383"
Community content is available under CC-BY-SA unless otherwise noted.