Sir Tain Def is a White Knight of Falador. He holds the rank of commander. Sir Tain created his own section of white knights, which is now led by Sir Kohtlund and Sir Ver. Sir Tain Def is known by many for his will to uphold the virtues of the White Knights, such as honesty, chivalry, and loyalty. Tain is a very advanced swordsman and has fought in many skirmishes throughout his successful life. Sir Tain is also an expert field medic and possesses an extremely vast knowledge of medical sciences. Sir Tain Def was roleplayed by the very well-known pioneer of White Knight foundations of the same name.

Tain Def was born in the year 117 of the 5th age. He was born to Liam and Tallah Def in the town of Rimmington. Tain had a close relationship with his parents, who saw great ambitions in him. Very little is known about Tain's childhood in Rimmington. In his teenage years, he moved to the city of Falador with his family. Not much is known during this stage in his life either. It is known that Tain studied medical sciences in a very assiduous manner. Tain's parents helped him greatly with his studies. His family soon became rather poor, as they sold most of their belongings to further advance Tain's knowledge.

Tain Def, living in Falador, most likely became very well acquainted with the White Knights. Tain's mother had actually been planning to have her son enlisted into the order, which is the reason for his strange name, Tain. His parents named him this so that eventually, if Tain was given the title of knighthood, his name would sound similar to "certain death", which Sir Tain would hopefully bring to those who oppose him. Ironically, Sir Tain was known throughout his career for sparing lives whenever possible.

Sometime around the year of 131 of the 5th age, Tain Def applied to the White Knights and was accepted as a squire.

Tain Def joined the white knights as a squire under Sir Ving. Sir Ving was well known for his good traits, such as chivalry and honor. It is likely that, due to the manner of Sir Ving's training, this is where Tain Def picked up these qualities as well.

Tain Def earned the title of Sir in the year 136 of the 5th age. King Vallance of Asgarnia performed the knighting ceremony for Sir Tain Def. Sir Tain soon proved to be an examplary knight within the order as he grew very close to his mentor, Sir Ving. Sir Ving was very dedicated in forging Sir Tain into an even greater knight. He taught the knight almost everything he knew, training him both physically and mentally. Ving found an unnatural talent within his apprentice; archery. Sir Ving soon discovered that Sir Tain Def easily surpassed the skill of all of the other intiates. Sir Tain even outmatched the memories Sir Ving had of his mentor and grandfather, who was a very famous ranger. 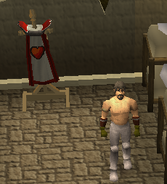 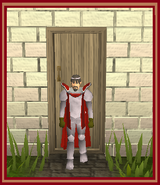 Sir Tain as a captain

Sir Tain leading a formation of knights
Add a photo to this gallery
Retrieved from "https://rsroleplay.fandom.com/wiki/Sir_Tain_Def?oldid=128132"
Community content is available under CC-BY-SA unless otherwise noted.