Sir Alexander Krieg Loynn-Stake was a Captain in the White Knights of Falador and is now a Temple Knight. Within his detachment he works on interrogations, investigations, and overall helps run the unit.

Alexander grew up in East Falador and is the son of Sir Joseph Loynn, a retired White Knight Partisan. After Joseph retired he married Vanessa Stake and had only one child, Alexander, who was named by combining their two last names. As a child he had always admired his father's past deeds and the fearless White Knights who he had served with to protect Falador and the word of Saradomin. Naturally, Alexander wanted to become a White Knight but he knew he would need prior combat experience so at the age of 17 he left home and enlisted in the Burthorpe Imperial Guard.

At the age of 17 Alexander enlisted in the Imperial Guard so he could gain combat experience. As a private, he was stationed as a wall guard and was eventually promoted to Corporal after a skirmish with trolls in which he administered first aid to several troops.

As a Corporal he continued duty as a wall guard and was captured by the trolls towards the end of his service. Thankfully he was rescued and just a few weeks later his four-year contract ended and he returned home to Falador.

At the age of 21 Alexander entered his squirehood in the White Knights where he was the personal squire of Commander Sir Bool Cowbra. He quickly passed the trials of a squire in only three years instead of the usual five and had a perfect score on his squire test.

As an Initiate Sir Loynn spent more time on guard duty, patrols, and peacekeeping. During his time as an Initiate he defended Falador during the war of 164. It was horrible fighting and Sir Loynn saw one of his friends get cleaved nearly in half by a Kinshra with a great sword. After the war, he aided his fellow knights in ending several goblin raids after the fighting was over due to the opportunistic Northern Goblin tribes. One day, Commander Bool saw Sir Loynn while he was cutting wood to rebuild things in Falador and he decided to promote Sir Loynn to Proselyte on the spot.

As a Proselyte Sir Loynn started training squires as well as preparing them for their squire tests. During his time as a Proselyte he also participated in a mission to retrieve Anti-Fire shields from the Duke of Lumbridge when the possible threat of Dragons had appeared. Sir Bool was pleased with the progress of Sir Loynn and named him "Knight of the Month" for June - July 2013 as well as promoting him to the rank of Acolyte.

With the threat of a Kinshra attack on Port Sarim Sir Loynn followed in the footsteps of Sir Brynden Ryker and started taking more of an initiative to lead knights. He wrote the plan, along with a detailed map, of the possible invasion and went with a group of Knights to the White Knight camp west of Sarim to get them situated. This invasion did not happen, however, but Sir Loynn was praised for his war strategies. At a Knighting ceremony several months later Sir Loynn was promoted to the rank of Partisan because of the progress he was making.

As a Partisan Sir Loynn participated in the Battle of Lumbridge as part of Sir Brutus' squad where they held the west side of the battlefield. During his first tour at the battle Sir Loynn killed two Kinshra but sustained wounds to his abdomen and wounds to his face after being kicked by a demon. He was knocked unconscious by this kick as it was straight to the head and collapsed his helmet in, causing the steel to slice into his face. He awoke in the castle the next day to find out that he had been blinded in his left eye.

After recovering from his wounds he decided that the Squires needed harder training so he took over as the primary Drill Instructor in place of Captain Deceit. After the knighting of several of his squires Sir Loynn again returned to Lumbridge to fight. Not much happened in this battle and there were minimal injuries on either side. In year 1 of the Sixth Age Sir Bool passed on the message that Sir Tiffy Cashien had taken interest in him and he was offered a job in the Temple Knights, he accepted this commission but soon left the Temple Knights and returned to The White Knights.

Upon returning to the White Knights he went his original job as a Drill Instructor and trained more squires. He returned to Lumbridge a third time but this battle was met with defeat and three of his freshly knighted squires, Sir Ian Legatus, Sir Daniel Vunda, and Sir Jack Forestall died. This greatly saddened him and he believes that if he had trained them better they would have survived. A short while before the Battle of Port Sarim and the ball to celebrate Saradomin's soon to be victory Sir Loynn was given an officer's commission.

Sir Loynn received an Officer's commission in Year one of the Sixth age. Only a few days after being promoted Sir Loynn attended the Victory Ball at Vallancia where he got very drunk and started a fight with Sir Ephraim. After starting the fight he was escorted out by Sir Vye Ver and went back to the castle. In the coming days the White Knights prepared for operations against the Kinshra. Sir Bool lead a squad of disguised knights to the Black Knight's Fortress to attack it from the inside out. This mission was mostly successful but the Knights were forced to flee. Sir Loynn then returned to the castle and continued his duties as a Drill Instructor.

Several weeks after Novtumberfest, Sir Loynn was promoted to the rank of Captain because of several Officer's taking leave.

His first few months back were boring but recruitment rates were steadily climbing and soon enough active fighting against the Kinshra was officially declared. Sir Loynn had the pleasure of announcing to the Section that war had been declared and that he would lead the first skirmish against the Kinshra on the road leading north out of Falador. In this battle his left hand was wounded and two of his troops captured, but the Kinshra had fled and the Knights had also captured two of theirs. After the prisoner exchange new departments and jobs were added to the White Knight section. Sir Loynn chose to become an interrogator and also became the head of the Recognition and Retribution department. Shortly after his was promoted to Commander.

After Sir Ant Gord stepped down as Commander, a vote was held for who should be the next Commander and Sir Loynn won by popular vote. Sir Loynn held this position for many months before stepping down after he had enough of being a political figure rather than a military one. He traveled around for a while before being invited to Camelot to become a knight there. But feeling out of place in Kandarin he returned to Falador and was reinstated as a Drill Instructor and as a Captain.

Return as a Captain

As a Captain again Loynn continued his duties as a Drill Instructor and helped train the influx of new squires to the Order. As tensions rose with Burthorpe and Asgarnia preparing for war he took a platoon of Knights to Outpost Stormme to help prepare for possible invasion. While there his old friend, Elias Vicet, entered the barracks. In response to this Sir Loynn approached him and punched him in the jaw which Elias returned with a swift kick to the crotch. Because of this disorderly conduct he was counseled by the commander of the outpost, Sir Tom Birnam, and given five lashes while Elias was given twenty.

Soon after the order split into several companies due to the growing recruitment rates and Sir Loynn was put in charge of the aptly named Stake Company. After gathering his force they marched to Rookie Village north of Falador to prepare for the invasion of Burthorpe.

After the success of the invasion Sir Loynn was ordered to take his company to southern Asgarnia and establish a permanent fort there. After weeks of chopping down trees, gathering resources from the local mine, planting crops, and doing other such labor the fort was established. Sir Loynn christened the base and named it after one of his knights who fell at the Battle of Lumbridge, Sir Ian Legatus, before returning to Falador for a couple of weeks to report back to Commander Vestreth and set up supply routes from the Capital. He ran this base with his company for several years before his "retirement."

Having done more than twenty years in the White Knights, Sir Loynn decided to put retirement paperwork in and give his rank and position to Sir Theodore. However, this was just a cover-up and he was transferring back to the Temple Knights to join a brand new detachment.

As an Initiate Sir Loynn participated in a mission to stop the flow of a weapons shipment from a Zarosian Cult on Karamja. This mission was a success but Sir Loynn soon resigned from the Temple Knights and went back to The White Knights.

Brand new - will fill in later

A demonstration in the White Knights' Castle

Sir Loynn helping with the sculpting of a statue 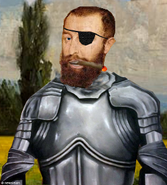 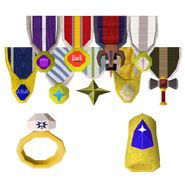 Sir Loynn in game
Add a photo to this gallery
Retrieved from "https://rsroleplay.fandom.com/wiki/Sir_Loynn?oldid=157949"
Community content is available under CC-BY-SA unless otherwise noted.