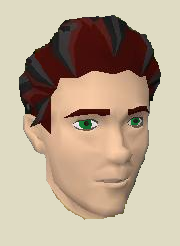 Elliot and his younger brother Ephraim we born and raised for part of their childhood near Ardounge until they moved to Falador at a early age due to their fathers job as a smith. As they lived out their lives in a new city Elliot always focused on his sword-play as his little brother Ephraim always enjoyed watching him waiting for one day when he could begin his training with his father. Their mother was a simple housewife always babying on Ephraim when he tried training with their father and their father would always play too rough with Ephraim but Elliot as a older brother would would also baby on Ephraim. That lifestyle ended however during the undead siege nine years ago their mother and father were killed and as Elliot tried fending off the undead with his fathers dagger white knights valiantly came to their rescue just in time when they were almost swarmed too young to express their gratitude they lived out their days training and becoming stronger to become white knights and repay their debt to this day they finally beleive they are ready to become white knights.

As a squire Elliot used his knowledge and training in the past to his Advantage however he refused to spar with his younger brother and sometimes questioned what it was to truly be a white knight and even if he wanted to be a white knight he kept up his training and studies until his knighting ceremony. He also battled during the battle of Lumbridge as only a squire and suffering some major wounds which took him awhile to heal from. He remained nearby Sir Loynn more then the other officers and decided to become one of Loynns squires on his own account since it was Sir Loynn who he admired more then the other officers.

After his knighting ceremony he still resumes his studies and training on a constant pace leaving little time for him to spend time with his younger brother or the other knights he finds himself wanting more and going further then he currently is. He still remains Sir Loynns squire at heart even if he is a initiate now he still fights by Sir Loynns side when he can and is usually found nearby him when he is not out training or studying to himself.

Retrieved from "https://rsroleplay.fandom.com/wiki/Sir_Elliot_Pryde?oldid=75679"
Community content is available under CC-BY-SA unless otherwise noted.