Shane Catrin Jäger is a human currently trained and employed as a Void Knight Scout. Her skills specialize around the areas of agility, basic survival, short-ranged projectile combat, and summoning. Naturally, she is a devout Guthixian, aligns herself with True Neutral, and is currently aged at 31. Shane is a cousin of the Renderra Family. She has spent her entire life serving the Void Order under the lead of many commodores, though her only distinctly remarkable accomplishment is completing the twenty-year training process for becoming a void knight. She is played by the user SsVivid.

Shane is highly dedicated to her faith as a Guthixian and it permeates almost every aspect of her life, including how she carries herself with others. As a result, all of her actions are very controlled and measured - it's a rare event for her to display extreme emotions or dramatic reactions. She is very level-headed, and she is likely to give a lot of thought and consideration to her words in any context. Her happier moods often manifest not in frolicking excitement or trilling chatter, but rather in jovial topic choices or more whimsical jumps in her trains of thought. That is, she might suddenly bring up the pleasant color of the grass when discussing a training regimen. Fowler moods, then, display themselves through stoic or perturbed behaviors, but never in outbursts or attacks.

Shane's voice carries in a mid-range feminine pitch, most accurately related to that of a mezzo-soprano, though she has no noted singing talent. The timbre of her voice is solid and smooth, and she is unafflicted by any remarkable accent that is nontraditional of commonspeak. In addition, the tone of her voice is almost always very measured and balanced, with little to no exception.

Shane's build is tailored perfectly to her line of work. She stands at an average height of 5'5" and has a very slender, straight body shape. Her figure is boyish and flexible, with no massive curves bulging inconveniently out from her body, and her center of gravity is closer to the ground than characters over six feet, allowing her greater physical balance and agility. She has the tone that comes from a lifetime of militaristic training, and looks like she would be as quick as she is. Her skin, set to match her bright orange hair, is very fair in tone. She will freckle before she will tan.

Shane has a remarkably androgynous face; she could easily pass for a male with a weak, boyish jaw. This is largely to do with her features all falling into very generic, expected categories, and her hair being cropped very short for both her military duty and her personal tastes. It does not, however, mean that she is unattractive - the addition of make up or long, flowing hair that would play her into femininity would leave Shane as a woman who is surprisingly easy to look at. Her short hair, of course, is bright orange, and her eyes are a mild mid-tone blue. 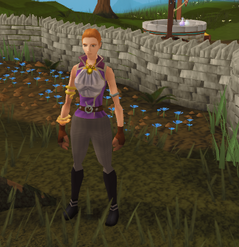 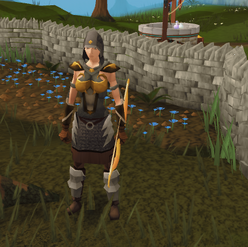 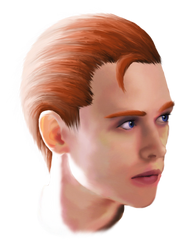 This is Shane styled practically; when she is on duty, she does not wear make-up or jewelry and pushes her hair back out of her face.
Add a photo to this gallery

Shane was born the daughter of Sandrine Kennedy and her prestigious Void husband, Brendis Jäger. She was raised in the Void Knight Outpost for the majority of her life and was absorbed whole-heartedly into the culture of the valluta. She dedicated nearly her entire life to protection of balance and embraced the messages of moderation and equilibrium very deeply over her years of involvement.

Only once did she doubt the nature of her teachings. She was nearly twelve, thick in the throes of curious youth as well as gripped by the confusing changes of puberty. Shane began to doubt the religion of Guthix, unsatisfied by her limited education on the subject. With an only half-lucid view of the world, she began to take shame in her blind submission to the god her family handed to her and felt strong urges to stray from the course she was on. So it was that Shane was briefly sent from her home with Sir Jäger and his Renderra wife. She spent a semester in a prestigious private educational institution in Falador, where she was taught both to be an orderly Saradominist and to shun the chaos of Zamorack. But something about it sat wrong. The "goodness" of the Saradominists was so dangerously extreme - it seemed they would willfully extinct an entire race if it meant being rid of those they considered undesirable, and their minds seemed closed to the possibility of any chaos having goodness in it. And, conversely, the Zamorakian creed that they shunned seemed no better, populated by those who served only impulse with no regard for greater good or fair measure. At least the way she understood it, Zamorakians would extinct that same race, but purely for the thrill of the devious act. Young Shane didn't need the entire year away from home to realize her family's faith was truly where she wanted to be after all.

Like many residents of the Outpost who believe in the Void creed, she began a squireship early in her young life. It was rigorous, but somehow laced equally with as many pleasures and satisfactions as it was painful and difficult. She studied not only the militaristic ways of the Void Knights alongside many other Renderra youths, but was also encouraged to practice balance in other areas of study. She took to expanding her field of knowledge laterally over many subjects in moderation, including some amounts of history, arts, and athletics. Then, in balance with the great depth and intensity with which she took her knighthood and survival training, she was free to wholly neglect other aspects of the world, like the creation of music or the study of ancient, arcane powers.

She studied for twenty years before being accepted as a fully-fleshed knight of the Void Order, but eventually it did happened. She stands presently as a scout for their force, a field-ready soldier capable of investigation, infiltration, and such light-footed work of individuals and small groups. She specializes in agility, speed, and short-ranged projectile combat, but was also trained as a summoner in the event that she was needed on the front to combat pest portals.

Shane's field, travel, and on-duty garb is a set of lightly-armored leather garments. The outfit is primarily crafted of sturdy, flexible leather that is strong against magical influence and mildly effective against physical attack, as well as fairly lightweight relative to metal. It is tailored specifically to her needs as a scout, allowing easy and quiet movement. There are metal reinforcements on key areas of the outfit, like over her chest, on her forearms, and on her shins, which provide an extra source of protection without adding the weight of full armor. A void seal is worn at all times while in-suit.

She carries a wide array of tools and weapons as well, though most are lightweight and easy to handle. Her primary weapon is a small shortbow designed for rapid short-distance archery, which comes with a small quiver of tipped arrows strapped to her thigh. In addition, she has one substantial dagger meant for use when ranged assault isn't an option and close-combat is unavoidable, to be used in tandem with the metal bracers on her forearms. The final addition to her tools is an array of aerodynamic knives that can be used both for throwing combatively and for practical field-use. 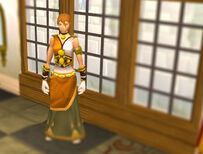 Shane visits a stylist in Falador to pick out a gown after being invited to Varrock's summertime ball.
Add a photo to this gallery

Retrieved from "https://rsroleplay.fandom.com/wiki/Shane_J%C3%A4ger?oldid=120097"
Community content is available under CC-BY-SA unless otherwise noted.