Setomus Cloug​h is the eldest son of Bruce Clough and Emma Marie Genic born in the town-colony of Lionheart on the 37th of Pentember, Year 189 of the Fifth Age, also step-son of Aztarwyn Zephon Gonzo. At his age of seven, he went to a witch to age him ten years older, physically becoming seventeen, however since then he's developed the mental age of his physical age. He has a sister, Trace Clough, and a brother, Blake Bloikon. Setomus also has a step-brother, Zephon Altus Gonzo, a step-sister, Akiza Gonzo, and an adopted brother, Scree Clough. Setomus is capable of producing some shadow magic, however is not completely an expert at this, more or less a beginner, and refuses to use it unless his life is in danger. Setomus, unlike the rest of his families, had been an Agnostic Aztarwynian due to his exposure to the Gonzo Religion and he had believed that Aztarwyn out of all the Gods was the least likely to be a true god, however he became Godless after taking initiative to kill Aztarwyn. Setomus is currently married to Rachel Gonzo and has a son named Samuel Gonzo-Clough.

Here shall be the history of Setomus Clough.

Setomus was born near the end of the 5th age in Clough Manor, a mansion that was in the town-colony of Lionheart. He lived in Clough Manor for the first two years of his life, which was pretty dull.

The Death of Bruce Clough

Setomus was sleeping upstairs when his mother and father were downstairs. Soon, the doors were blown open, and Aztarwyn stepped through, engaging in combat with Bruce, eventually killing him. Setomus woke up after the doors were blown, and was questioning what the hell happened. Under Bruce's wishes, Emma had decided not to tell Setomus how Bruce died, she only took the body upstairs to lay it on their bed, and told Setomus that his father had passed onto another life. He cried soon after, as normal children do.

At the age of three, Setomus lived in a shack within the Lionheart mines with his mother and newborn sister. Rachel Gonzo then stepped in, a long-time friend of Emma, meeting Setomus for the first time. Setomus watched his newborn sister as his mother and Rachel were dealing with things outside of the shack. Rachel soon left after they all named the baby Trace, and since then, Setomus' life went back to normal.

At the age of 7, Setomus was sleeping one night with his family, just nice and peaceful. A knock on the door woke him and his mother, Emma, went to answer he. He was too tired to bother, however he still listened to the conversation. Rachel had came into the shelter, crying, All Setomus was able to pick up was some sort of invasion, leading her to run away and come here. She was then allowed to stay for as long as she needed.

Setomus, Rachel, Emma, and Trace had gone to his grandfather's house to visit Blake, his other brother. Setomus, Trace, and Blake went to a different room and let the adults do their thing, after Blake had an unexpected erection. Due to this Trace asked him what was in his pants and he replied with a banana. Setomus actually believed Blake had a banana down his pants. The family stayed the night, and went home the next day.

Give or take a few months into the Cruor-Lionheart war, Head General Irano Forvetta had visited Lionheart City and had reunited with Rachel. He took her for a night, and when she came back, she was high on life.

Emma and Rachel had talked about her stay with Irano, and Emma had asked if Rachel had sex with him, which she did. Setomus, paying attention to the conversation, had never heard of the term and asked what sex was. Rachel gave a very shitty explaination of what sex was, giving the mommy-daddy speech.

The next day, Rachel and Emma had decided to go to Hauptsitz. While they were gone and Trace was sleeping, Setomus was still very curious on how sex worked. He snuck out of the house, thinking if he could age himself, he could figure out easily what sex was, given grown-ups did it.  He found the witch within the city, and had asked her to age him ten years older. She had turned him to the age of 17, and gave him some (rofl)potion that made him mentally older as well. She had spare clothes for someone his age, and he took them. His hair was also dyed black, wishing to move away from his blonde hair. He went out to the pub, finding his lucky woman. They rented a room, and locked the door shut. The prostitute showed Setomus how to do a woman, and did fairly well for his first time.

After Emma and Rachel arrived from Hauptsitz, they noticed Setomus went missing. Rachel recalled back to the conversation they had about her stay with Irano, and had a hunch that Setomus went to find out what sex really was. She went to the pub, where she found one room to be reserved. She went upstairs and blew the door right open, Setomus woken from her screaming.

The Death of Emma

While in the Gonzo Family

Life as the Dark Lion

Making a Visit to the dead.

Visit from Blake and Aztarwyn

Preparing for the Battle

The Battle for Rachel

Until Aztarwyn do us part

King of the Nashuko Isles

The Council of Gonzo

A Day of Sorrow is a Day of Happiness

Patriarch of the House of Clough

Learning the ways of Bruce

Setomus as a child had blonde, short hair, with blue eyes. However, after his aging, he had black short hair and kept his blue eyes. Setomus looks much like his father, especially in how he dresses. With a fair muscular build, he stands at about 6'1", normally wearing a black shirt and black running slacks. He also wears black boots. Setomus has a different outfit for his alias "The Dark Lion", where he wears the combat-vest of his father, and a cloak with his fathers hood, a black Lions head on the cape, and the head of the Lion on the chest of his vest. He also wears his utility belt occasionally, which holds throwing knives, a sheathe for his sword, and a sheathe for a dagger.

Setomus has a wide variety of weapons from what was left from his father before his father had died. He has a simple double-bladed steel sword, which he usually doesn't carry unless he goes hunting. To accompany his sword, he carries a steel dagger, also only used when he's hunting. Setomus has about 20 throwing knives that he's specialized himself to use. To top it all off, Setomus also has the crossbow of Bruce Clough, a repeater crossbow which has a lantern for the dark, which he has taken off, a scope, which also he's taken off, and two blades on the limbs of the bow. To accompany the crossbow, he has hundreds of steel bolts left from his father, with bolt racks that can hold up to 50 bolts to hold these.

Setomus acts like his physical age, however sometimes has outbreaks of his true age, only with his mother. Setomus isn't very fond of when someone tells him how old he actually is, as he has grown to know his physical age as his true age. He prefers to save the lives of others rather than his own, however is able to survive in the process. He could be considered an alcoholic, as he very much enjoys going to the bar and getting down-right hammered.

Setomus is currently a member of the Clough and Gonzo families, his father being Bruce Clough and he joined the Gonzo during his relationship with Rachel, however he was exiled from the family, but later rejoined due to his marriage with Rachel. He also has ties with the Genic Family.

Jacob Clough(Father of Bruce and Wayne, husband of Zoe) - Deceased

Zoe Clough(Mother of Bruce and Wayne, wife of Jacob) - Deceased

Bruce Clough(Son of Jacob and Zoe, brother of Wayne, husband of Emma, father of Setomus and Trace) - Deceased

Wayne Clough(Son of Jacob and Zoe, brother of Bruce) - Deceased

Setomus Clough(Son of Emma and Bruce, brother of Trace, father of Samuel, husband of Rachel) - Alive

Trace Clough(Daughter of Emma and Bruce, sister of Setomus, aunt of Samuel) - Alive

Please note, due to the very long history of the family, this tree will only list the immediate family of Aztarwyn.

Rachel Gonzo-Clough(Daughter of Aztarwyn and Alexys, daughter in-law of Emma and Bruce, sister of Thomas, Aztarwyn II, Zephon, and Akiza, step-sister of Blake and Elizabeth, wife of Setomus, mother of Samuel) - Alive

Zephon Altus Gonzo(Son of Aztarwyn and Lily, brother of Rachel and Akiza, step-brother of Setomus, husband of Akiza) - Alive

Akiza Gonzo(Daughter of Aztarwyn and Lily, sister of Rachel and Zephon, step-sister of Setomus, wife of Zephon) - Alive

Setomus Clough(Son of Bruce and Emma, son in-law of Aztarwyn, brother of Blake, Elizabeth, and Trace, step-brother of Zephon and Akiza, husband of Rachel, father of Samuel) - Alive

The list of Genics will only be directly related to Emma.

Blake Bloikon(Son of Emma, brother of Elizabeth, Setomus, and Trace, step-brother of Rachel, husband of Cassie, father of triplets) - Alive

Elizabeth Genic(Daughter of Emma and Joe, sister of Blake, Setomus, and Trace, step-sister of Rachel) - Alive

Setomus Clough(Son of Bruce and Emma, son in-law of Aztarwyn, brother of Blake, Elizabeth, and Trace, husband of Rachel, father of Samuel) - Alive

Trace Clough(Daughter of Bruce and Emma, sister of Blake, Elizabeth, and Setomus, aunt of Samuel) - Alive

Samuel Gonzo-Clough(Son of Setomus and Rachel, grandson of Aztarwyn, Emma, and Alexys, nephew of Blake, Elizabeth, and Trace) - Alive

Pictures, videos, all kinds of stuff!

Setomus as the Dark Lion. 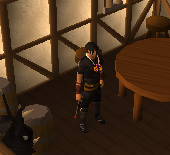 Setomus where he could normally be found, in the Yanille bar.

Setomus, preparing for his battle with Aztarwyn.
Add a photo to this gallery

Retrieved from "https://rsroleplay.fandom.com/wiki/Setomus_Clough?oldid=150957"
Community content is available under CC-BY-SA unless otherwise noted.