This page addresses information about Seren, her religion, and her followers as it applies to World 42 role-playing.

Seren is the goddess of Light. She is one of the two greatest creations of the Elder Goddess Mah, and the twin sister of Zaros. Zaros left Freneskae, resenting Mah, but Seren remained to tend her out of compassion until she could be of no more help. Her compassion is one of her most defining traits.

The name Seren is Elvish, meaning simply "star". She does not seem to have any particularly strong association with starlight in particular, and the name may be seen as poetic. It may have been given to her by the ancient Elves on Tarddiad.

Her symbol is a light blue or teal diamond. This is perhaps an abstract representation of a shard of crystal, a star, or both.

After Seren left Mah on Freneskae, she eventually came to the Crystal Plane of Tarddiad, homeworld of the Elves. She watched them, fell in love with them, and at length revealed herself to them. She taught them much, and also learned from them; and before long the Elves abandoned their old religion and became her followers.

During the First Age, she and the Elves were visited by Guthix on Tarddiad, who invited them to Gielinor. Seren chose to follow him there, and the great majority of the Elves followed her. They took up residence in Western Gielinor, the land that would become known as Tirannwn; and there Seren helped them build their capital of Prifddinas.

During this time she was known to explore the world with Guthix, but always returned to her people, showing just how much she cared for them as they did for her, and which was best exemplified when she refused to leave her people when Guthix sought to remove the influence of gods from the lives of mortals. Instead, Seren remained with the elves as he slept and chose not to interfere with other mortals, opting to stay hidden as she had promised him.

During the Second Age, Seren sought to protect her people from the other gods who had found Gielinor. The World Gate, which the elves had often used to visit their homeworld, was lost to them during this time. As promised, Seren kept herself and her people isolated from the world, although it's known that some elves left Isafdar to fight in the conflicts that raged between the gods in an effort to protect their home.

As the Third Age came about, Seren was able to keep her people safe from the worst the God Wars had to offer. Eventually though, the world was damaged so severely that it woke Guthix from his slumber. He immediately established his edicts and banished all of the warring gods from Gielinor. Afterwards, he went to Seren and tried to make her leave as well, despite her neutrality throughout the great war. Seren's love for her people was too much, however, and so she shattered herself, seeding the forest of Isafdar with pieces of her body. These fragments later became the crystals the elves are known famously for, and which they utilize in their day-to-day lives.

After the assassination of Guthix, and Tuska's demise, she was finally brought back with the Song of Restoration with the help of the World Guardian and the Elven Clan leaders.

As seen in The Light Within, Seren preaches four key virtues:

Now that she is returned, Seren resides in the Tower of Voices at the heart of Prifddinas. She does not wish to rule or be worshipped, but she does offer guidance, at least to the Clan leaders.

Followers and Creatures of Seren

This category addresses traits that players, often new ones, give their Serenist characters but that aren't actually seen in Serenists on Gielinor. That is, a character may have these traits, but it would not be expressly due to the teachings of Seren's religion. 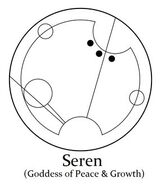 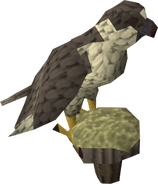 A Falcon, Creature of Seren.
Add a photo to this gallery
Retrieved from "https://rsroleplay.fandom.com/wiki/Serenism?oldid=155524"
Community content is available under CC-BY-SA unless otherwise noted.