Serafino is a mage and thief who works for the Metal-Amalgamation.

Down from the Peak

Serafino travels to a bar near the remote town Peakstone, where he met the mercenary Wo Dao. The bartender told the two of the strange events involving the nearby town: spirits from a recent war had been haunting the area, constantly re-enacting their deaths. Some wandering Fremennik entered the bar, mistaking Serafino for a Bandosian one of them saw in a vision. After failing to knock him out with a beer glass, the bartender picked up his crossbow and demanded they take any violence outside. The Fremennik challenged Serafino to a fight outside, but was convinced to leave after realizing his mistake.

Serafino left with Wo to investigate the haunted town, stopping along the way to speak with a merchant. In return for purchasing an iron skillet, he told them about the object the town was named after; a large stone on an ornate pedestal atop the nearby hill, which resisted all attempts to be taken from said pedestal.

The two reached the town, finding a woman known as Rosaline Haines in an abandoned building. She joined the two, climbing up the Peakstone's hill. After investigating, Wo discovered that the pedestal was buried to some extent. Serafino used his magic in an attempt to unearth the pedestal, causing the ground to collapse. The three landed in a large room filled with water. Serafino carried Rosaline out of the water, as she couldn't swim.

They saw that the pedestal was actually part of a massive, underground statue. Wo and Rosaline agreed that they had to search the area for a way out, as Serafino didn't mention that he could get them out himself. The three easily fought past a group of skeletons, finding the corpses of a few partially decomposed adventurers. Serafino took their armor, and Rosaline obtained a mithril throwing axe.

Serafino broke through a damaged wall, leading them to a room with a treasure chest (which Serafino made sure to take before the others could). Shortly afterwards, a skeletal sorceror notices and attacks them. Following its defeat, Rosaline recognized the object on its staff as the real Peakstone, taking it for herself. Carrying the staff resulted in a horde of skeletons rushing up the stairs and chasing them to the top room with two trapped adventurers. They told them of the approaching skeletons shortly before said horde broke into their room.

They found that the skeletons were only following them, and were under the command of the Peakstone's holder. Rosaline decides to leave with the Peakstone, but the adventurers state that the object has to be returned so that the dead may rest. Rosaline refuses to give up the Peakstone, while Wo suggest a duel to settle the dispute. Rosaline disagrees with Wo's offer and Serafino disregards it, taking the Peakstone by force.

Serafino and Wo leave Rosaline under the watch of the skeletons, finding the machinery to return the Peakstone to. After heading back to the top room, they found that Rosaline had wounded Rivan and left. Wo stayed behind, tending to Rivan, while Serafino returned to the Peakstone. He became invisible and waited until Rosaline entered the room, where he knocked her out after a brief struggle. While returning to the top room, Rivan succumbed to his injury. Serafino teleported the group to Varrock, where they went their seperate ways. The surviving adventurer, Setra, had the guards take the unconcious Rosaline into custody.

Serafino is both physically and supernaturally powerful. He makes the most of his strengths by combining them in the form of enhanced melee attacks, which can have a variety of dangerous effects.

He is an accomplished thief, able to easily break into most places and steal items without being noticed. However, he relies on magic to do so.

He is also an experienced enchanter, can use illusion magic and exchange thoughts and memories through telepathy.

Serafino in the Gnome Stronghold, near Baxtorian Falls.

A robbery in progress. 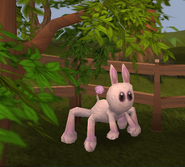 Carino.
Add a photo to this gallery

Retrieved from "https://rsroleplay.fandom.com/wiki/Serafino_Velare?oldid=157296"
Community content is available under CC-BY-SA unless otherwise noted.