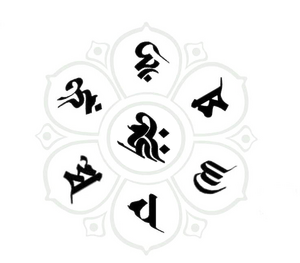 This page will contain details about the elusive Sanskriit-Mah, a tribe of Mah's Dreams resident primarily on Freneskae. Through reading it, you will become more intimately familiar with their origin, history, customs and beliefs. The page may also give you helpful advice on how to deal with a Sanskriit-Mah, should you ever encounter one.

The Sanskriit-Mah's history is a work in progress: this part of the page will be filled in over time as the writing progresses.

Sanskriit-Mah have no physical telling trait that is shared across all the tribe's members. However, many of them have single-color eyes with no pupils or irises, suggesting that they are blinded or have impaired vision of some sort.

In terms of size, Sanskriit-Mah vary greatly, though a certain pattern can be found: Most of the tribe is made from rather short Dreams, with a smaller number- usually the strongest- towering over both their tribemates and often other Dreams as well. Sanskriit-Mah philosophers have theorized that the taller, stronger tribesmen act as lightning rods to prevent harm to the shorter members of the tribe. The theory is as of yet unconfirmed.

Unusual for Dreams of Mah, the Sanskriit-Mah have a rather unique system of distributing titles of honor to those proving them especially worthy. Such a title is awarded in a highly ritualistic fashion, but does not require the imminent title holder to be present. Once a title is properly given, it will count as part of the title holder's true name, which holds significance far beyond the imagination of most. Presumably the first official title to be awarded within the Sanskriit-Mah was the title of 'Edda', meaning 'elder'. It is said to be directly derived from Mah-Sanskriit herself. Titles awarded by the Sanskriit-Mah include:

Meaning "elder", the title of Edda is possibly one of the most powerful titles any Dream of Mah can hope to obtain. Judging by those who have held this title, it does not necessarily correlate directly with any chosen Dream's actual age, but also their experience, wisdom, power and ability to convey the same.

While it is true that anyone knowing the correct titles may call themselves any of the titles listed hear, or indeed any they might hear from a member of the tribe, the Sanskriit-Mah's Entitling Ritual produces a special sort of magic which latches onto the targeted individual's being, adding a very specific magical resonance to the word if used correctly in conjunction with the individual's name. This magical ring has, despite numerous attempts, proven to be impossible to replicate.

This section details the confirmed names and titles of Sanskriit-Mah. The list is not exhaustive, nor is it likely to be completely accurate.

Helpful advice about what to do should you be lucky- or unlucky- enough to encounter a member of the Sanskriit-Mah.

Retrieved from "https://rsroleplay.fandom.com/wiki/Sanskriit-Mah?oldid=122158"
Community content is available under CC-BY-SA unless otherwise noted.