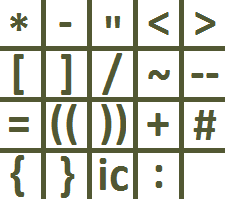 These symbols are recognized throughout the RuneScape roleplaying community by just about everyone - old and new, group and freelance, public and sandbox.

In order to indicate that your character is performing an action, you would enclose the description of your action inside of asterisks or hyphens. Both symbols are commonly accepted as action citations and which one you use is just a matter of preference. So, for example, to say that your character has stuffed a gnomeball up his shirt, you could type:

*Jack pulls his shirt out and shoves the gnomeball he was holding inside of it.*

- To pretend he is pregnant, Jack shoves his gnomeball into his shirt, holding it near his stomach. -

Notably, with several roleplayers using Skype as means of roleplaying when they cannot access the game, a trend of leaving the action text unenclosed has been spreading. Thus, one may encounter actions the likes of

Jack pulls his shirt out and shoves the gnomeball he was holding inside of it.

Basic speech is the simplest text in RuneScape roleplaying. To indicate your character's speech, simply type what you want him/her to say and submit it to the game with no other markings. To make your character announce he is pregnant, for example, you could type:

Hey, there. I'm a pregnant man.

Note: Some players occasionally choose to indicate dialogue by enclosing the words in quotes. This is completely optional.

Sometimes you might want to make it clear that your character is speaking only loud enough for his neighbor to hear or so loud that everyone in the room would hear whether they liked it or not. To shout, enclose your character's dialogue in greater than/less than symbols that open towards the text. For example, you could type:

To whisper, then, you do the opposite. Using the same symbols, place them around the text such that they open away from the text. For example, to whisper, you could type:

It's not uncommon to come across a character speaking in a language other than commonspeak. When this happens, the character will state the name of the language his/her character is speaking and then type the dialogue inside brackets. For example, if Joe didn't understand Jack because he was from Nardah, Joe's player could type:

Kharidian: [I'm sorry, effendi, but I only speak Kharidian. By the way, what is that under your shirt?]

Most languages have common abbreviations. Instead of spelling out Kharidian, Joe's player could instead type "KH" to tell the language he is speaking. Once the spoken language is understood, its name or abbreviation can be dropped and the player could simply enclose his dialogue in brackets. Jack could answer:

[How convenient that I also speak Kharidian! I am pregnant, Joe. There is a baby in my shirt.]

Kh [How convenient that I also speak Kharidian! I am pregnant, Joe. There is a baby in my shirt.]

RuneScape's chat functions do not have text formatting options. This, of course, makes it difficult to emphasize certain words or tones in the words of your roleplay. Adding forward slashes around a word or phrase, then, is a way to put emphasis on the enclosed text. This has the same meaning as italicizing a word. For example, Joe could say to Jack:

Jack, there is /absolutely no way/ that you really expect anyone to believe you. That's /absurd./

Some individuals also enclose emphasized words in hyphens, instead of forward slashes.

Jack, there is -absolutely no way- that you really expect anyone to believe you. That's -absurd.-

In order to tell the players around you what your character is thinking while still making it clear that the dialogue is internal and wouldn't naturally be heard, a player would enclose the dialogue in tildes. For example, Jack could be thinking:

~Come to think of it, that explains why Joe never laughs at any of my jokes. Didn't understand them.~

If someone types "-ic-" or any basic variant thereof, it signals that player is beginning to roleplay and any text to follow will be from the point of view of whichever character is being played. For a player to specify which character he is playing, he would also mention the character's name or identifying characteristic. For example:

On the other side of this, if a player decides to stop being in-character, he would type "-ooc-" to signal that any further text is what he, the player, is saying. However, often times a player will have something to say aside from his character but not want to completely get out of character to say it. In this scenario, the player will enclose his comments in double-parenthesis. For example, Jack's player could say:

((Dude, I always thought Joe was from Varrock! My mind is blown!))

For convenience, players sometimes use only a single parenthesis for the same effect.

Due to the character limit on the RuneScape chatting system, descriptive actions and dialogue often get cut off before the player can thoroughly elaborate on what he wants to say. To signal that your input isn't done and that those interacting with you should wait to add something new until you've finished, put double-hyphens at the connected ends of your sentences. For example, Jack might say:

-- the sun don't shine, but you are a real killjoy lately. I mean, seriously, --

Note: When the double-hyphens stop, the typer has signaled that he is done.

These symbols are official and established, but they aren't as widely recognized as the common symbols. A new player freelancing around Falador might never come across some of these. The obscurity of the symbol varies by example - some are used in just about every group roleplay but are rare in freelance, others are specific almost entirely to one group and those they interact with.

Commorbs are communication devices originally invented by the Temple Knights. Most group roleplays have employed the use of commorbs to work like radios or telephones. Oftentimes they can broadcast messages between large groups of people, but they can also host private conversations between individuals. To indicate that your character is speaking over or into a commorb, enclose the dialogue in braces. For example, when Jack gets tired of Joe, he might send a commorb to his girlfriend:

Note: In a group of people who could overhear, you should indicate somehow that you're speaking into a commorb.

When directing a commorb message to a specific person (usually required if there are several people with commorbs, and you do not wish for all of them to hear what you have to say), it is common to direct it to the recipient by adding an ampersat and the recipient's name before the message (this also applies to telepathic messages in group settings).

Some players chose to train their characters in telepathy. If a telepathic connection is opened between two characters, they can communicate this way without having to speak aloud. To indicate this is the medium of communication, enclose the dialogue in equation symbols. For example, Jill could answer:

=Hey, Jack. I just broke my commorb by dropping it. What in the blazes are you talking about?=

Some roleplay groups allow telepathic messaging between groups. If you wish to directly message a single person connected to the group, you should attach an ampersat similar to the way described above in the Commorb section.

Certain characters, particularly powerful vampyres, are thought to have suggestive powers. That is, they can influence weaker-minded enemies or peons into obeying their will with this ability. To indicate this, enclose the telepathic command in pluses. For example, Jack could try to manipulate Jill:

+You will fall for this prank, Jill! You will not see through my mischievous nature!+

Many players find that they begin typing a long, detailed response to someone only to have what they were writing nullified by a quicker input by another player's short input. This can be a frustrating situation for someone who had a more valuable addition to the plot trying to write quality description. As a result, players devised a quick symbol to warn people that you have a lengthy response to write. To signal this to nearby players, quickly type the pound sign, '#'. (This symbol is also called a "hash" or "number sign.") Putting this symbol into the chat box basically says to other roleplayers

# = "I have a lengthy response to write. Please hold off on saying anything else until I'm done."

See also the section 'Continuing typing' further up, which is a more commonly used variant of this.

Retrieved from "https://rsroleplay.fandom.com/wiki/Roleplaying_Symbols?oldid=159215"
Community content is available under CC-BY-SA unless otherwise noted.