Raul Longhorn, or Raulcules (RAUL-Cue-Lees) is a Fremennik character played by Bit. What started off as a somewhat joke character (Ex: Raul's ridiculous past/childhood) has turned into Bit's most played/most liked character, and is now considered one of his main reasons why he still role-plays today.

Raul's normal attrire could vary from different shirtless outfits of platelegs, pants, dress pants, dragon leather, ect. He travels with his long horned helmet on him at most times, only wearing it occasionally. He travels shirtless due to the nice weather he does not get to experience in the northern lands.

Raul's battle equiptment contains various parts. He wears his long horned helmet for head protection, his chest/back is covered in a plate of iron metal, followed by various iron chain's to cover the rest of his torso. Underneath his firt set of armour, he wears a padded gambeson for extra protection at a light weight advantage. This gambeson follows all the way down to his knees, for upper theigh protection. He wears leight leather boots, with a thin piece of steel covering the toe/top area. His leather gloves contain steel spikes, for extra damage when in a hand to hand combat situation. His weapons of choice are is granite mace, when used with two hands could crush the mightiest of foes. Or he used his large steel greatsword, to sever the heads of even greater enemies than him.

Raul was born on a normal, calm day. Though he came out of the womb, and it was nothing less than the greatest thing the village of Rellekka has layed it's eyes on. Raul, nicnamed Raulcules due to his giant-like features from birth, was born.

Within the first few years of his life, Raul learned the basics of hunting, cooking, and crafting. Him and his father were as close as they were to their beards, and Raul's father is the one who taught him everything. Raulcules excelled passed anyone, due to his extreme growth at a young age and his love for being powerful. It was about his sixth year of age when everything changed...

The New Life of the Grizzly Man

Luckily, Raul and his father found a cave to stay the night in. Unable to build a fire due to the wet wood from the rain that came down before, they decided to take their chances and sleep in the cave while it was nothing but darkness, as a puny cave scares no Fremennik! The next moring, Raul woke up with his father gone. He also may have noticed that he was surrounded by a clan of Grizzly Bears. Armed with a knife, Raul was ready to fight. Though after Raul took out the alpha of the clan, the wolves respected Raul in his ways of fighting in defense. Raul skinned the huge bear and made sure it did not go to waste. He also created a shrine for the first kill he ever accomplished. The other bears then looked up to Raul, and Raul learned from the bears.

Over the next 17 years Raul lived the bears, developing his own fighting and hunting styles. He became a "Grizzly Man", and even though he lived in the wild, Raul grew enormously. Raul caught the most food out of his whole clan, and provided the grizzlys with fresh meat every day. He also developed his own training meathod (Where one finds the heaviest object close to them, and proceeds to lift, throw, squad, toss, hurl, ect. it until reaching extreme tiredness).

Eventually, Raulcules set out to find his real home. It was hard for Raul to leave his bear clan, but he knew that he had to find his family. Raul travelled far and long, finally finding the village of Rellekka.

Raul's return excited the whole village. He met up with his mother and father, where he found out that his father just escaped the bear's lair. They thought little Raul was dead for good, but the Grizzly Man proved them wrong. Parties were thrown day and night, and a great happiness was set on Raul and his family.

For the next five years, Raul lived in Rellekka peacefully. Getting into bar fights and making love to many women. But Raulcules grew tired of the somewhat civilized life he had, and decided he needed to leave his hometown.

Raul set out for the world, living in the wild. He became connected to nature more than ever as he travelled the world. But by the time he was thirty years old, Raul stumbled upon a great building in the desert, known as the Sanctum of Heroes. This is where Raul battled a great warrior known as Gonad, and Raulcules was defeated. This made Raul's eyes open, and he realized that he had much to learn in his life.

Raul now resides at the Sanctum of Heroes, where he has befriended many people such as Katrina, Gonad, and Baldor.

Raul is a mighty man. He is jolly, and a bit slow in the head. With the courage of a bear, litterally, he is willing to go against anything that gets in his way of jolliness. He loves to drink heavily, and his tolerence is through the roof. Raul loves to compete in drinking/eating contests all around Gielinor, and will participate even if theres no reward. His favour meal is extremely light simmered meat and any sort of ale he can find. Raul also developed his own way of hunting. He calls it "The Way of The Grizzly". Raul developed this way by watching the bears hunt during his days living with them. Raul has also been training with a bow, expanding his ways of hunting, though he is not the best with ranged combat, he has been training at the Sanctum of Heroes for other types of combat besides mellee.

With most people, their love is for another person, or gardening. This is not the same with Raul. After a long few days travelling along side his friend, Dr. Bolas, they came to an older looking cave. Bolas and Raul were on the hunt for some special gewels, unknown to the average person. Dr. Bolas didn't have a clue if they were real or not, but a guy on described as "shady" told Bolas about these gems, and where to find them.

Once they walked into the mouth of the cave, the two heroes walked a long dark path, luckily Bolas brought a latern. After crawling through one long hall, the cave opened up, where a rock-like bowl, the size of a small grizzly cub, sat at the end of the room. It seemed as if the bowl was filled to the top with diamonds, or even better, the unknown gems. Once reaching the bowl, a red dragon, hardly an adult, flew/flopped onto the floor behind them. Raul, out of sheer luck and power, dodged the dragon's firey breath, and jammed the whole blade of his steel shortsword up through the dragon's jaw, almost killing it instantly. Raul finished the dragon off, and skinned as much as he could of it.

Turns out, it was a plot to assassinate Dr. Bolas, although he only suffered a scare or two, the duo got not "special gems". The bowl was fill with rocks, hardly covering the top of the rocks were just small opals, and more rocks.

Raul never felt something so frightening, and had wanted to do it again. Now investing most of his sanctum time researching all types of dragons, he's deciding to start slaying dragons. He also got some nifty looking pants from the dragon's hide.

Raul's "Cloak of Victory". Showing a bear indicating his childhood, and a dragon for what he slays.

Raulcules at the Sanctum of Heroes.

Raul crushing a puny goblin with one of his various war hammers. 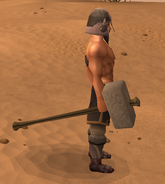 Raulcules wielding his legendary Yakbasher. Stories say, it has the power of a thousand yaks.
Add a photo to this gallery
Retrieved from "https://rsroleplay.fandom.com/wiki/Raul_Longhorn?oldid=154795"
Community content is available under CC-BY-SA unless otherwise noted.