Pyris is a Zarosian Mahjarrat role-played on world 42 by DannyExalted. His mansion is cleverly hidden on white wolf mountain, but he spends most of his time in eastern Asgarnia/Misthalin, away from home. He has no spouse, but one Daughter. his only other living family member is his brother, Egnaro.

Lich form: In his lich form, he's 8'5", a rather large mahjarrat. He normally wears some form of robes, along with his equipment, jewlery, and other miscellaneous items. His blood red gem sits upon his forehead.

Rejuvinated: He looks exactly like his lich form, except for a few noticeable features. He has obtained skin, which is a dusty purple/red, similar to Moia's. His tribal markings are Blood red, similar to his gem. His eyeballs are black, with purple irises.

"John Smith": John Smith is his favourite alias. He stands at 5'9", rather slim, but toned with muscle. His eyes are purple, and the symbol of Zaros is carved onto his forehead, where his gem would usually be. He has jet black hair, which his magical hat would rest upon. He often wears a nice dress shirt, with a blue longcoat. His pants are the same colour as his longcoat. His boots are made out of the leather from a morytanian swamp snake.

The only family member that he openly talks about is his brother, Egnaro, who is rarely seen with him. It is currently unknown if they cave any other siblings, though it has been confirmed that Pyris has no children. Their parents are never referred to by name, but they are referred to as "Dear Father", and "Dear Mother".

In the sixth age, following the events of the battle of Lumbridge, Pyris mated with another one of his kin. The result is his daughter, Zehlikai.  She strongly resembles him, due to the fact that she's made of mostly his energy.

Not much is known about Pyris at this time, except that he often defended his family in a savage manner. When Pyris was almost 4000 years old, his brother was born.

Pyris' life on Freneskae continued to be extremely uneventful, According to him retelling his history. He'd defend his little cave, would train his brother, and would often flirty with the women of his kin.

During this time, his "Dear Parents" were very concerned that he'd be responsible for many little mahjarrat babies running around, so for his own good, put an old freneskaen curse on him, rendering him infertile. (See "The curses"). One day, on the battle field, He was in a fight with a mahjarrat, whom was wearing a helmet. He overpowered his enemy, and pushed him to the floor. He got ontop, and started beating down on the mahjarrat's face. Sooner or later, he knocked the helmet off, and for the first time, he say the Mahjarrat's full face. He seemed young for his race, probably no older than a thousand years old.

He let the lad go, and started returning to his cave. Suddenly, a bright light Flashed in the sky. The light faded, and there was a figure. It spoke with power: "come, serve me. It shall be worth your time....." Pyris was extremely happy. Now all of his kin will have a common lord, and will be much more peaceful than they currently are. He arrived at his Cave, only to find his "Dear Parents", and a few mahjarrart lying on the floor dead. Egnaro sat, in the corner, his hands gripping tighly onto his dagger, soak with the blood of the fallen enemies. Since then, Pyris has taken care of him, as if he was his own son.

For a few hundred years, Egnaro and Pyris served Ichthlarin, but switched to being Zarosian. Zaros simply promised more power and control, which the mahjarrat clearly liked. Pyris and Egnaro, both very good with magic, became teachers, both teaching at a school in Senntisten.

Pyris, Along with Teaching at Senntisten, also became a Priest of Zaros, soon rising to Pontifex Minimus. With his newly granted power, Pyris freed slaves in return for their service at his warriors. he taught them, and made them respectable warriors. now, during the six age, they're various forms of undead such as wights, Wraiths, and Geist

Zaros was soon betrayed by Zamorak, And both of them were furious, mostly Pyris, because Zamorak was like an idol to him.

During the third age, Pyris was eager to bust some Zamorakian skulls open. Of course, the day before he was suppost to be sent to fight in the god wars, his superiors gave him orders he didn't neccisarily like. he was ordered to become a spy, and "serve" Zamorak throughout the God wars. Pyris did a swell job at this, however, and easily fooled most, if not all, that he was a true Zamorakian, and Zaros was nothing to him. The only downside to this, however, is that his brother was an underling in the ranks of Zaros, and therefore was not aloud to know, for if too many people in the Zarosian army knew of pyris being a spy, a Zamorakian spy might learn of this too. for many years, Pyris had to fight his own loving brother, who now hated him. But alas, Pyris was a loyal follower of Zaros, for he had been good to them, and he would not go against an important order such as this one. a the years went on, Pyris' sorrow only grew. his friends were being whiped out, and his home, senntisten, now destroyed. Also, Azzandra, one of his role modles, was trapped in a pyramid. a thousand years later or so, he heard that Saradomin's, Bandos', Armadyl's, and Zamorak's forces were fighting for a mysterious yet powerful artifact called the godsword. He went on his way to the temple where some of his fellow Zarosians were held, only to find it frozen. He left, and continued with his life, before feeling a Strong power from the east.. Forinthry was destryed, and guthix had now awaken The Eddicts of guthix was established, and Pyris was freed of Zamorak, but now his master Zaros was gone.

Not much is known about Pyris' life during this age. He does, however, confess to continue to be a Zarosian spy. Besides going to rituals, Pyris' only activity in this age was joining the Dagon'hai. he stayed with them until the fifth age.

This was an important Age of Pyris' History. Pyris was assisting the Dagon'hai, Pretending to be a Zamorakian. Sooner or later, however, rune magic was invented, and the Dagon'hai decided to make their own form of it, dedicated to their god. Pyris stayed with them for 70 years, Learning this magic, as well with Standard magic. When word of the wizard tower burning had spread to Verrock, Pyris had ditched the order of chaos, moving on to the Wizard's tower, to focus on His elemental magic. It was during this time that he Learned a few lunar magic spells, and Started working towards Plasmamancy. Nearing the end of the fifth age, Pyris had an accident with a Plasmamancy experiment. He went into Hibernation until year 169, When he was awakened by the 18th ritual. He then, still working on his lightning magic, decided to work for the Varré, for his own personal gain. At this point, it was obvious that he had some master scheme, but it was only starting to begin. Just before Guthix's Death, Pyris had met with his brother for the first time in a few millennia. Though being different religions (or so Egnaro thought), Egnaro forgave Pyris, accepting him as family again.

Shortly after this age started, Pyris moved his plans over to the west side of the salve. After a few weeks, Pyris met with Egnaro again, who convinced him to be open about his true religion. Pyris, working on his master scheme, Applied to many schools and Organizations, getting influence. He served as a member for the Dominion of Ancients and a teacher at the Academy of Heroes. Also, due to Zaros being better known (thanks to Soran, and the Varrock museum), he is now a priest of Zaros, teaching those about the great lord whom he finds worthy. He became Confident enough to restore his Previous title, Pontifex Minimus, to himself.

Being a mahjarrat, he is gifted with certain powers that other races aren't so lucky to have.

Being a mahjarrat, he's naturally blessed with the ability of magic. Also, being nearly 12,000 years old, he's had pleanty of time to hone this natural tallent.

As a Zarosian Mahjarrat, this was one of the first magics he learned. (I only use the old form of ancient magicks, but accept anyone who uses the new post EOC ancient magicks)

Other forms of magic

During his lifetime, Pyris has recieved two curses.

When this curse came to be, Pyris' overall power was split into three, equally divided between the three alter-egos. Being said, he can only be at 63% of his over all power (100/3 is about 66, but 3% isalways taken off because of the constant cage holding back "Sitio"), which is still much better than a trained human. As a last resort,"Pyris" and "John Smith" can both agree to let "Sitio" Free, allowing Pyris (the whole) to be at 100% capability (minus the power they would have used fighting pre to freeing "Sitio"). Also, since "Sitio" would be in control, not only would he have the knowledge of the two alter-egos, but would also have the instinct of a trained cold blooded killer.

Pyris, after Studying for years, has finally cured his personality curse. He's stiched his mind back together.

ken has anywere from 4-6. When asked how he thought of the idea, he claims to have inspiration from the Eastern lands. He does, however, still use a combination of shurikens and throwing knives.

1) instead of a fire-based enchantment, it's "Plasmamancy" based.

2) instead of a red glow, the blade shines white, sometimes purple if Extremely charged with magic.

This necklace, Kept around Pyris' neck by a Mithril chain, is one of Pyris' most valuable possessions. In between two shards of dragon metal, a orb rests. this orb is not only a power supply, charged with Pyris' own magical energy, but is also a holy ward, weakening unholy foes when in contact, and also an amulet of Ghostspeak.

This golden ring is a very magical artifact, also made by Pyris. The gem, a ruby, which sits upon the ring is a energy source, allowing Pyris to call upon magic, even if weakened. the golden ring itself is enchanted to allow Pyris and anyone who wears it a vision that sees not only Gielinor, but also the realm of shadows, despite being in it or not.

Anima is a name given to two of Pyris' artifacts, both serving the same purpose. One, a bracelet, holds a handful of gemstones. These Gemstones, however, are actually Phylacteries. They each hold the soul of a Wraith, ready to be called upon if needed. The second artifact is a Disk, made of the Volcanic glass known as Obsidian. It has many bead sized gems attached to it, each of these holding a shade or wraith soul. Some note worthy differences are:

1) The disk is Large, heavy, and is not wearable. it's definitely something that no one would be hiding in their backpack. 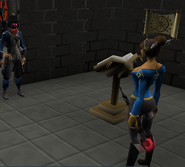 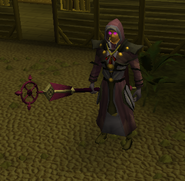 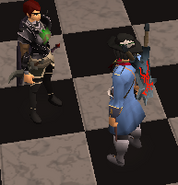 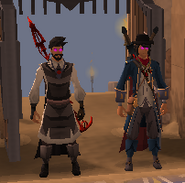 Pyris and Azrael, both in their human forms. 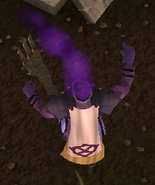 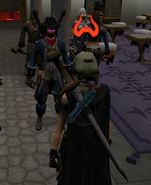 Pyris is listening to a speach 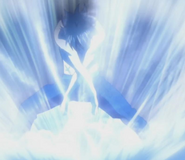 He now grasps a better understanding of ice magic 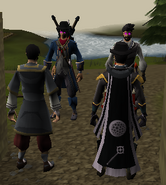 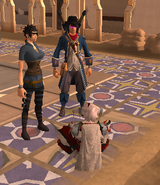 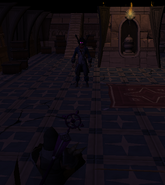 A Magic the gathering Card, featuring Pyris
Add a photo to this gallery

The Dominion of Ancients- He was a part of that

Divisional Split Theory - He applies to that

Geist - He mades those

Retrieved from "https://rsroleplay.fandom.com/wiki/Pyris?oldid=158441"
Community content is available under CC-BY-SA unless otherwise noted.