Temple Knights Order 171 is one of the more secretive and renowned auxiliaries within the Temple Knight organization of Saradomin. Officially formed during the Siege of Falador during the year 164 of the 5th age, the auxiliary has since gained fame and recognition among those paying attention after the Darkrim Incident with the late Gielinor Inquisition, lifting the auxiliary from obscurity outside of the already shadowy Temple Knights

Once recruited for training, all Order 171 candidates must go through the normal but rigorous and mind-testing selection process of the Temple Knights. About 90% of the candidates wash out of selection before the end, and even if a candidate reaches the end there is no guarantee that they'll be selected for the Temple Knights and Order 171- they can be told to just go home. The selection process lasts for 3 months and is held within Rimmington County of South Asgarnia. Candidates go through a multitude of physical and mental tests including but not limited to swimming, weight training, sparring, stamina testing, hiking & climbing, history exams, mathematics exams, and much more. Once the selection process is over and the remaining candidates are chosen to become Order 171 Temple Knights, a ceremonial promotion is held in the fields just east of Rimmington where all citizens, guards, and armsmen are invited to attend.

Once a candidate has been selected through the selection process, they are demoted back down to Initiate within the Temple Knights and are assigned as a Swordsman within Order 171. All Order 171 Temple Knights start as a Swordsman. Newly selected Temple Knights go through many hours of rigorous training with their new brothers & sisters, starting the day early with prayer, moving to a hearty breakfast, then to a two hour PT session, afternoon prayer, then either sparring, mock-missions, room clearing sessions, or a mix of the three. Afterwards is evening prayer, dinner, and leisure time for about an hour or two before sleeping and waking up for the next day. During a deployment it's about the same- only in a different environment. After some time, Swordsman Knights of Order 171 can request training for a different, more specialized role. They include Archer, Saboteur, Pointman, Medic, & Recon.

Before the Darkrim Incident, and through the 5th age, the Temple Knights & White Knights have been using the older school MK I Standard Issue Plate Armor with White Longswords and White Kiteshields made of pure steel metal. The MK I armor itself was basically made of straight up steel and provided a great amount of protection with an under layer of riveted chainmail. Now although this gave Knights great protection, their ability to move swift and quick in the field like some of their opponents were hampered, causing most fallen knights to blame agile foes who knew where to stab. Their all-metal kiteshields didn't quite help that either, as they were rather heavy. Because of this, the scientists within the Temple Knights started to develop a new armor which was later known as the MK II Standard Issue Plate Armor

From after the Darkrim Incident and on, the MK II Standard Issue Plate Armor was developed and produced towards Knights and Order 171. The MK II armor, still made of steel, sacrificed a bit of the armor in less vital areas for more mobility in the field, to try and make up for what the MK I missed. The MK II proved superior because of this, combined with Order 171's training. Along with the MK II armor, pure chainmail chests with shoulder pauldrons were also developed for knights to give even more ability to move during combat and in the field. Many of the specialized roles within Order 171 prefer to wear the MK II chainmail because of that. Their weapons also changed too, giving more of an edge to the standard issue longsword and taking some of the metal away from the kite shield, making it square, and adding some wood which ultimately makes it lighter.

With the return of Saradomin & his army, the scientists at the Temple Knights were at it again and are currently developing the MK III Standard Issue Plate Armor. The MK III in theory offers the best of both MK I and M II, made with steel infused with a mithril alloy to make it lighter- Thus giving Knights the mobility of the MK II armor while having the same beloved protection as the MK I armor. The project is still under development and is currently not available to most knights. Some even speculate it will never get out of the testing phase. Only time will tell..

For the most part, all Temple Knights while on-duty are issued the expensive Communication Orb V2, which allows Knights to communicate with one-another across the realm without interference. The Communication Orb V2 also has the ability to record sounds, take low-quality pictures, and record short video- unlike the Communication Orb V1 which civilians some how got a hold of. The CO v2 also has the ability to hack into lower Communication Orbs, and even boasts the ability to teleport the Knight without the use of runes or teleporation tablets for quick access around the realm. Along with the CO v2, Knights are also equipped with some rope, a vial of anti poison, a white metal dagger side arm, a stick of white chalk, a holy symbol, and a ready-to-make torch. That is the basic swordsman kit, at least. Other specialized units have different loadouts, but they are generally all the same. The higher-ranking Temple Knights are known to have a ring of life on their figure.

When Order 171 was first created, it was devoted exclusively to counter-terrorism like activities with a realm-wide responsibility. It's range of duty typically included hostage situations, explosive threats, direct threats to Saradomin & his lands, protection of monestaries, and other things of that nature. On certain missions small teams of Order 171 Knights were tasked with covertly infiltrating high risk areas in order to carry out reconnaissance or security assessments of Saradominist & Asgarnian facilities and embassies; and to give advice on improvements in order to prevent casualties in an event of a terrorist attack. Although the auxilary was created as a counter-terrorism force of Temple Knights, it has become a multi-functional special operations auxilary within Saradomin's army and Asgarnia with multiple roles that include high risk personnel extractions, direct action, and compound raiding. Overall, Order 171's full mission is to remain classified but it is thought to include pre-emptive, pro-active counter-terrorism operations, counter-proliferation, as well as the elimination or recovery of high value targets from unfriendly foes. Alas, Order 171's ultimate purpose is to assist the rest of the Temple Knights in preserving Saradomin's name & presance in Gielinor for years to come.

The majority of the missions and operations assigned to 171 are classified and may never be known to the public. However, details of some of the operations have become public knowledge such as the few on Commander Spears's profile. There have been many cases where 171 has been put on standby and operational plans developed but the auxilary was stood down for various reasons.

There is a clocktower located in Rimmington built of solid stone and wood during Countess Hayley Spears's rule in the second year of the 6th age that serves as a monument to Saradomin and his Temple Knights. Although generally simple and dull in design, on the base of the clocktower there are names enscribed into the stone of fallen Temple Knights of Order 171 that have fell in the field under the watch of Commander Spears.

Knights of Order 171 getting ready to breach a kill house in a mock excersize.

Temple Knight Archer on overwatch in a window.

The ASA Garrison in Rimmington, where Order 171 is stationed.

Order 171 Knights at a camp set up during a field excersize. 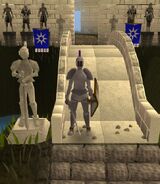 The older MK I Armor design. 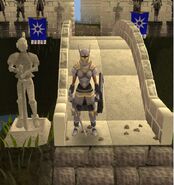 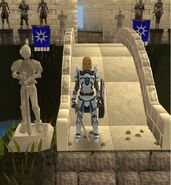 What a basic Swordsman of 171 would look like; Drawn by Sir Bool.
Add a photo to this gallery
Retrieved from "https://rsroleplay.fandom.com/wiki/Order_171?oldid=143980"
Community content is available under CC-BY-SA unless otherwise noted.