Olrun Constantina Dumitrescu Varré (/œlˈrúnːˈˈværɛ/, Year 161 of the Fourth Age – ) is the matriarch of House Varré, a Vyrelady created and roleplayed by Ollie, and the youngest coven leader in Morytania.

She is the former self-appointed "Empress Regent" of the Dominion of Morytania and served as a political figure beside her husband, Klaus Nourom, governing Morytania during Lord Lowerniel Drakan's absence.

She has currently returned to her former position as a Countess of Morytania after having left the Dominion of Morytania to its own devices for thirteen years whilst raising her sons in the safety of Darkmeyer.

Olrun Varré was born during Year 161 of the Fourth Age at the Dumitrescu family manor, South Moeras Hall, in southern Morytania, the second and youngest child of Count Angantyr Varré and Lady Elisabeth Dumitrescu, both prominent members of the House of Nobles in Darkmeyer. Her only brother, Oliver Anatol Varré, honourably lost his life during a battle against the Asgarnian Paladins in the late Fifth Age.

She is currently wed to Lord Klaus Vladimir Nourom of the Nourom Coven, the former Lord Regent of the Sanguine Fields and Incumbent of Darkmeyer, and father of their two children, Klaus Viktor II and Maximilian Ilaryi.

She has been wed twice before to members of the coven Draculea, Ora Draculea and Xandis Draculea. There was no issue with either of these arrangements and both husbands disappeared in very mysterious circumstances, never to have been heard from again.

Olrun spent her childhood and adolescence in training to be a respected noblewoman, learning dance, Morytanian history, etiquette and other social graces. Later, she gained an interest in the sciences, and after many requests to her father, Angantyr consented and she was sent to apprentice under a well-known chemist and inventor in the northwest of Morytania.

During her twentieth human year, a ceremony was held for her turning in which the current head of the family would turn her into a vampyre, a sort of tradition in the Varré family. She willingly accepted vampyrism, as most of the Varré did, and returned from her apprenticeship to take her place as a noblewoman, and as such, was properly introduced into Vyre society within Darkmeyer.

Now introduced, Olrun began to hold all variety of banquets and balls at her father's manor on the Varré Estate where she quickly became known for her extravagent costume, her love of dance and wine, and her strange aversion to feeding directly from humans. During this time she became well-known for being a patroness of peace and Morytania seemed to fall into a sort of calm peacefulness.

The murder of Elisabeth Dumitrescu

Tranquility was not something that was meant for Morytania and as such, it did not last long. There had been nearly eleven years of so-called peace until paladins began arriving in the region from Asgarnia. These honourable white knights slaughtered many vyrekind without question and soon enough, an all-out war had begun.

During this war, Olrun's mother, Elisabeth, was one of the victims targeted by the paladins. During an evening when a small battle broke out in Canifis and the Varré Estate left rather unguarded, seven paladins arrived at the gates. Not having been expected, only Elisabeth and Olrun were at the manor and without guards of any sort. They did not, however, bother to go after Olrun, who had turned to flee — someone had paid them off to leave her. Instead, they took her mothers head after little struggle, setting her body aflame, and went on their way.

This war was Olrun's first encounter with humans and it forever changed her views on the species which in turn began to alter her opinions on the entire world of Gielinor.

Only three weeks after the death of Elisabeth did Angantyr decide to step down from his position as the head of the family and leave, resolving that he should take out revenge on his wifes' murderers. Oliver Varré refused his obligation to  become the new head, suggesting that if Angantyr would truly leave that instead his sister take this title and he remain her ever-loyal guardian as he was much more a soldier than a leader.

Olrun thus became the head of the Varré family, gaining the title Countess, and began a reorganisation of the House, using the families' wealth to advance their place in Vyre society whilst her good nature allowed her many loyal servants and subjects. Hence the family prospered and a new power was soon to come to Morytania. 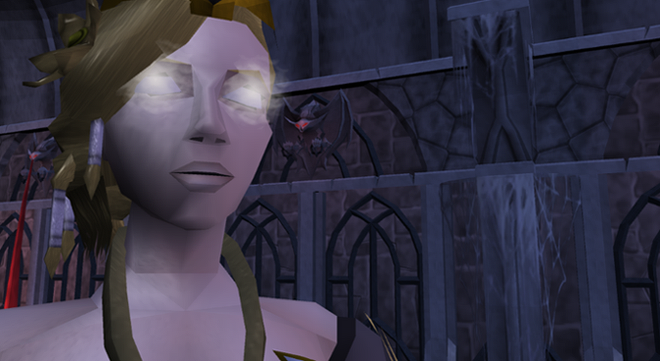 As House Varré grew in number and influence, Olrun decided to take several steps to assure that her family would continue to gain and maintain a significant place in Morytania's history.

She once more struck up a strong alliance with them and the Skalov joined together under the Varré banner. Having done this, the Varré gained the territories of Canifis, Mort'ton, and the Slayer Tower along with the considerable wealth the family had gained over the years.

After briefly meeting Klaus Nourom in Canifis and speaking barely three sentences to him, Alucard Draculea called on Olrun, suggesting that she wed Klaus on the hopes of creating alliances between the covens and perhaps for his own benefit as well, as he believed the two to be on the best of terms.

Wishing to have a marriage that would benefit her and the Varré politically, she broke off a very brief engagement with Lothorian Foryx, who wished to marry her on the basis of love, to wed Klaus in a private ceremony with only one witness on the First of January '13.

Alucard had clearly changed his mind after being told that they had signed a marriage contract in secret and he promptly invited the two to his castle on false terms, immediately attacking Klaus with a blisterwood stake (somehow) whilst Lothorian and Luc Draculea, appearing from the shadows, cast binds on Olrun to keep her from attempting to protect her husband. Luckily, Klaus and Olrun managed to escape and this event was the turning point in Morytanian politics.

Olrun, outraged by the assassination attempt, was now prepared to go to war.

Olrun soon met with the leader of the Vaeyl coven, Charo Vaeyl, as he wished to unite under the Varré banner. Olrun accepted his coven and appointed him governor over Canifis.

With the influence of Olrun over the denizens of Morytania, her reputation with them one whom they admired and adored, and the brilliant military mind of Klaus beside her, they began to form a plan which would unite Morytania once more, bringing Morytania to its former glory and under their own banner – though this plan was not without cost.

Lark, too, did not approve of Olrun's marriage to Klaus and protested, and taking the few that were still loyal to only her, headed north to form a new alliance with the Draculea coven. This would spark a series of conflicts that would result in the termination of many important lives.

Lark's alliance with the Draculea coven forfeited the Skalov's claims on the town of Canifis and the outpost of Mort'ton. (Although she also forfeited the right to the Slayer Tower, Olrun decided to be generous.) Olrun immediately ordered changes to be made, publicly confirming that the two areas were now in the charge of House Varré.

The town of Canifis underwent complete renovations which included the remodeling of all buildings and adorning them with Varré banners along with the addition of Vyrewatch patrolling in and around the town at all times. The most severe change, though, was a guillotine sat on a platform in the centre of the sqaure, a custom-made silvthril-edged iron blade fitted into it, and surrounding the platform, erected pikes with the dismembered heads of those that had defied the Varré rule and ownership of the region.

Occupation of Solitude Mine

Preparing for the imminent war that was surely to take place against the Draculea and their allies, Olrun suggested they find a source for the war materials they would need.

Setting their sights upon the large mine in the south, negotiations began with the owner of the area, Nakoma du Lac Ventress, an outsider and neutral vampyre with no ties to any coven. Negotiations succeeded with the Varré gaining access to the mine and eventually overrunning it, occupying the area and taking it as their own.

Conquest of the Slayer Tower

Olrun had been generous and had let Lark Skalov keep her tower but to unify Morytania, House Varré would need it all. Thus her sights were set and she began plans for the seige and capture of the Slayer Tower.

Before the plans were even near completion, however, Adrijana Vaeyl had travelled to the tower and without even a few harsh words spoken, they had surrendered the tower to her. She promptly cleared it out and moved the Varré Vyrewatch in. The tower then became - and still is - the location of the open court to the Dominion of Morytania.

Having taken control of more than half of the important settlements in Morytania, including Barrows which was casually turned into a military training area for the Varré soldiers, it was decided a grand ball would be the perfect way to celebrate such an accomplishment. This party would be a bit different than most of Olrun's gatherings, however.

Revenge and the Heads of Leaders

The Plan for a United Morytania

Olrun had dreamed of a Morytania united under one banner – the black and gold of the Dominion – with each Vyre family governing their own cities under the law appointed by herself and her husband, both following and enforcing the laws set by Lord Lowerniel Drakan and thus holding court to keep everything in proper order.

As Morytania grew less fearsome to the denizens of the West, humans and other creatures began marching to the East set on destroying Vyrekind. This led to leaks in security, a number of Blisterwood branches being stolen, and even the loss of Vyre lives not to mention the death of Ranis Drakan and Vanstrom Klause at the hands of mere humans.

They had succeeded uniting several of the covens for the most part, and taking the majority of land, setting up high-ranking officials in various families as governors over the different regions.

Olrun and her husband, as well as many members of their house, suddenly disappeared from society, leaving the Dominion in the hands of supposedly trusted governors.

In her human form, Olrun stands with flawless posture, a slender pale figure of five feet and nine inches. With platinum blonde hair in an intricately woven chignon or in a plait, her crystalline grey eyes and rosebud lips painted crimson upon a snow-white complexion, she gives off an air of innocence that might definitely lure in those sorts that wish to protect a young and helpless lady.

In her vyre form, Olrun gains nearly four inches in height, her skin becoming a dusty grey and her elongated fingers end in blackened two-inch talons. Her ears take a slightly more pointed appearance, as her nose shortens nearly flat against her face, and large grey wings unfurl from her back which when spread fully gives a nearly eleven feet span. Who knew.

Retrieved from "https://rsroleplay.fandom.com/wiki/Olrun_Varré?oldid=110152"
Community content is available under CC-BY-SA unless otherwise noted.