Legatus Niesebanel Zadicus is a vampyre and a Legatus of the Zarosian Empire and is roleplayed by Dasmius. Very devoted to Zaros, he fought against Lord Drakan during the Zarosian Extermination but was defeated and was forced into exile. With Drakan's death and the dawn of the Sixth age, he returned to Gielinor. His current whereabouts are unknown.

Zadicus is described as very wise vampyre. He seems to hold a grudge against Zamorak, the general who betrayed his master. He is also fearful of Blisterwood logs and weapons as they are harmful to the vampyre race.

While in his humanoid form, Zadicus has violet hair with facial hair, he also wore a purple trench coat, with shoulder pads bearing the symbol of Zaros. While in his weak vyre form, he had black skin and wore a purple shirt, also bearing the symbol of Zaros, the membrane of his wing is purple, further affiliating his loyalty to Zaros. When he regained his strength, his skin is grey and now wears platelegs with a tasset bearing Zaros's symbol in addition of a purple sash, purple gems and the edges and lower braids of his hair dyed purple. In his human form, he takes the form of a frail man in a black robe and hood, concealing his face, wielding a brown staff which he uses it as a walking stick.

Due to his nature as a Vampyre, he can change forms at will. His power comes from the Ancient Zarosian magick. He is also physically strong, able to lift a human with one hand with ease.

Zadicus arrived at Gielinor alongside other races and quickly allied himself with Zaros. Throughout the Zarosian Empire, he rose among the ranks of his race, earning him the Rank of Legatus. It is unknown what he done throughout the Second Age but all that it is known that he ruled Kharyrll throughout the last days of the empire.

At the end of the Second Age, Zamorak, now in possession of both the Staff and the Stone of Jas, formulated a plan to attack Zaros in his fortress alongside Drakan, Thammaron, Zebub, Hazeel, Zemouregal, and Viggora. The generals entered Zaros's fortress under the pretence of discussing war plans against the Saradominists and other religious factions that continued to engage in skirmishes along the nation's borders. Upon entering, Drakan and the rest engaged Zaros's bodyguards in combat. Zadicus attempted defeat the rebels but was effortlessly defeated by Zebub while Zaros retaliated, but the group narrowly escaped his blows, giving Zamorak time to circle the god and impale him with the staff. Zaros, albeit weakened, duelled Zamorak and had the upper hand in the fight. Zamorak was then impaled upon the same staff and Zaros's powers were transferred to him just as the Mahjarrat was about to be suffocated by the Empty Lord. Zaros's body was destroyed and his spirit fled Gielinor to avoid death, while Zamorak collapsed from sheer fatigue. Viggora and the other humans involved in the theft of the Staff of Armadyl were cursed to roam the Shadow Realm; while Viggora regards this to be Zaros's "death curse", stating that Zamorak's other allies were not visibly affected due to their magical essence, Lucien believes it to be a curse inherent to the Staff itself, which would mean Drakan was not affected at all.

The Zarosian Extermination and exile

Zadicus retreated back into Kharyrll after Zaros' defeat by Zamorak. Upon arrival, he was confronted by Lord Drakan and engaged in a fierce battle. Despite having the upper hand, he was defeated and he fled to Vampyrium to live in exile. 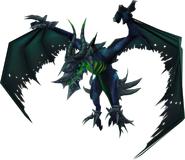 Dracul, Niesebanel's pet Wyvern.
Add a photo to this gallery
Retrieved from "https://rsroleplay.fandom.com/wiki/Niesebanel_Zadicus?oldid=159417"
Community content is available under CC-BY-SA unless otherwise noted.