Morzina Vanescula Darkon, Master of Ancient Magicks, is a vyrelady and magician of unknown age. This character is roleplayed by the user known as Morzin White.

Morzina has the classic vampyre skin and facial features. She has blue eyes and black hair. Slim and fit body type. She is approximately 5’ 9”. She has no special features other than a simple black rose tattoo on her right shoulder blade. She has knowledge of the paladins and of Saradomin lore. She is very skilled in magic, particularly ancient magicks. She has a blind rage against paladins, but doesn’t like to kill civilians.

Morzina Darkon was once a priest for the Order of Light. After the Darkmoon Clan affair, she had become a seasoned veteran of war. Once the Order had been repurposed into the Army of Ivandis, she transitioned into a vampyre expert. She studied their history, culture, and battle tactics, while reporting it to the army. One day while studying vampyres in Darkmeyer, disguised as one of them, she was cornered. She reached into her pocket and pulled out of Camelot teletab and thought, “no, a paladin does not flee!” She fought the 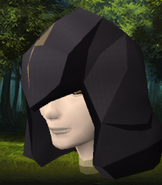 Hood Down
Add a photo to this gallery

vampyres off as best she could, but they overran her. A vyrelord known as Count Orgaz took an interest in her. While she was in disguise, he allowed her to study him. Instead of letting the other vampyres enslave her, he took her into his home. He gave her a choice to either live with him as a vampyre or be thrown back into the streets of Darkmeyer. She had no choice and became a vampyre. He nurtured her into a vyrelady as fast as he could, but Morzina would try to escape hoping Paladin Sun could help her.

The count tried his best to keep her in line, but she escaped and fled to Paterdomus before becoming a vyrelady. She begged Sun to help, but all he did was hand her a balance potion and shoo her away. Morzina held the bottle in her hand and considered the possible outcomes. Is this what the paladin order stands for, forced suicide? The life she was forced to live chose her, not the other way around. ”Instead of coming up with a peaceful solution to vampyres, they hunt us like animals,” she thought, “there must be another way, the army is blinded by vengeance and religious zealotry.”

She came to the revelation that the only way to deal with religious zealots is the same way they treat vampyres, murder. While she was leaving Paterdomus for the last time, Guthix teleported her to a strange land, where she could live happily for many years. While at this location she trained herself brutally until she became a powerful vyrelady, Guthix noticed this and sent her back becuase she didn't forget her past in this new land. When she arrived back on Runescape, it was the exact moment she left, but she now was a powerful vyrelady. Morzina now hunts any Saradominist or Guthixian zealot that steps foot in Morytania, while searching for a safer solution to being a vampyre.

She now follows the ancient religion of Zaros converting her once knowledge of Saradominist magic into ancient magic. She grows, however, each day more into the very thing she once studied. It has been 20 years since this occurred. Over this time Morzina has grown into a much darker version of her past self, losing much of what made her a paladin in her younger years. She now has joined the Council of Blood as a Saradominist expert. She was allowed to join despite heryoung age as counter to the much older vampyres on the council. She gives a completely different view on current issues as she is much younger and has much knowledge of the Saradominist religion.

She recently has fallen in love with a strange human named Tael. She disguised him with her scent and allows him to live with her in Darkmeyer for the time being. He reminds her of when she used to be human and this gives her great pleasure. In order to further this relationship, she decided to discover a means to spend time with her lover across the salve. She discovered through research that Vampyrism in humans is actually like a curse. Curses can be transfered using Ancient magic, which she excells at. At the border of the salve, she uses this knowledge and transfers the curse into her ancient staff. She then leave her staff somewhere alongthe salve, and leave Morytania as a regular human being. This state has drastic consequences, but she endures to spend time with her lover, Tael. Once she returned to Morytania, she met with Olivum, Lordess of Mort'ton. Olivum and Morzina made nice and began discussing current vampyre politics. Certain issues were discussed before being rudely interupted by some one claiming to be a prince of Falador. Morzina wasn't in the mood to deal with random humans, so she retired to Darkmeyer.

This section is made to discuss her ability to turn back into a human temporarily. This section will outline the effects of turning back into a human and the lore, that I use to justify it. I will not argue this with anyone, do not even try. This can not be abused in any way by following my rules. Do not come to me if some one uses my method and does it wrong.

This ability assumes that vampyrism is a curse and not a disease.

This curse is transfered from the user to the ancient staff.

The ancient staff is the god Zaros staff. Zaros prayerbook uses curses instead of prayers. The staff is able to absorb curses and therefore absorb the users vampyrism.

The user therefore must have knowledge of ancient magic.

The staff has to be left in Morytania while in human form.

While in this form the user is a regular human, that forfeits any abilities associated with vampyrism and all magical ability granted by gods.

In this form no god will grant you power.

This form only will hold for 24 hours before the curse naturally returns.

The curse returns as if you just were turned. This means you become a crazed Juvinile and your character has two option, be killed or be force fed a guthix balance potion by a friend.

The staff can only be destroyed by anything that would destroy a vampyre.

Once you touch your staff you are instantly returned into being a full vyre.

Once you turn into a human, you become incredibly weak while adjusting.

In human form, you are a human and not a human with vampyre weakness. A pure 100% human with human needs.

Retrieved from "https://rsroleplay.fandom.com/wiki/Morzina_Darkon?oldid=69934"
Community content is available under CC-BY-SA unless otherwise noted.