Morzin Lighthammer is a master Explorer. He is a dwarf. He is 35 years old.

Morzin is short, with large gut. However, he is still in shape. He has a long red beard and shoulder length red hair, wears a brown smock with regular clothes, and carries an assortment of weapons that he invented as well as a standard runite crossbow loaded with “special bolts.”

Morzin is aggressive, straightforward, cynical, intelligent, and creative. Morzin’s parents were influential members of the Silver Cog mining company in Keldagrim. Since his mother and father were both highly political figures in dwarven society, they groomed Morzin to eventually do the same. He grew up with everything he ever wanted. In his home there also lived a gnome engineer whose job was to repair the mining equipment or other house machines. Morzin was amazed at the huge machines this gnome would work on.

One day at age 8, Morzin found some tools and started taking apart much of the mining equipment. The gnome engineer was amazed at how quickly he was able to take apart the equipment and began talking to him. They quickly became friends and Morzin became his student. The gnome taught him how to be an engineer and an explorer. By day he would be taught how to be a politician and by night he would be taught about machines. This continued until he was 18 years old.

At 18 it came time for him to leave his home, so he asked his parents for some money to explore the world. They reluctantly agreed to give him sizable amount of gold to start a business. He took this money and used it to travel the world in search of inspiration for his great invention. He visited the monks of Entrana and was amazed by their hot air balloon. He heard whispers of a device that could make an individual disappear, so he traveled to the Myreque base and saw the smoke bombs. He witnessed a human with a great cannon resting on his shoulder firing frogs and studied its design. He heard of the Elves, who built weapons out of crystals, and visited their home to witness glass being sung. He heard of a strange crystal that was formed from the waters of the River Salve and got a hold of a few to study their magical properties. He learned the attributes of each alloy he could find.

On the boat to Entrana, he met an older gentleman named Sun. Sun was talking with a younger man named Karith about the struggles of fighting in Morytania. Morzin quickly jumped into the conversation and arrogantly came up with idea refuting all their complaints of vampyre combat. Sun and Karith were annoyed, but at the same time intrigued. Sun asked Morzin to meet him at Paterdomus temple if he ever decided to fight the good fight in Morytania. Morzin was always taught that balance must be kept and anyone over the River Salve lived a decent life. Sun instructed Morzin of the horrors being committed over the River, while on the boat.

Nevertheless, Morzin continued on his journey for inspiration. He drew schematics for inventions at every chance he got. He never built anything, just drew. Some of the things he drew were incapable of being built, but he drew them nonetheless. It wasn’t until a year later he finally accepted Sun’s offer. He offered his advice as a Diplomatic and Military Advisor as well as his inventions. He told Sun that he wouldn't be very useful in combat. Sun told him it would be okay if he did not fight, and so he joined the Army of Ivandis. 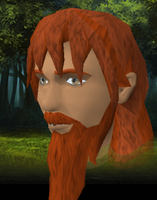 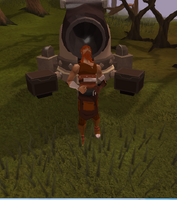 Combat magic gear
Add a photo to this gallery
Retrieved from "https://rsroleplay.fandom.com/wiki/Morzin_Lighthammer?oldid=30683"
Community content is available under CC-BY-SA unless otherwise noted.