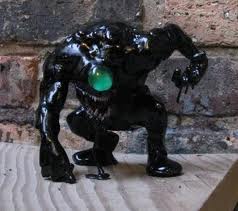 Mortupice are a player-made Undead by Lord Kisin and Zaox . They form when bodies drown in the magical tar of Mort Myre. The first recorded sighting was when the Sicarius adventured deep into Mort Myre Swamp.

Mortupice are humanoid monsters, with bodies made purely of a tar-like mettalic substance. The bones of those drowned had slowly broken up, but the spirit swells in the tar, rising in a blobulous form, vaguely shaped as the one who had died.

Their bodies have a natural ability to stop most attacks, Stabbing, Slashing, Crushing, and Ranged Weapons being near useless.

Magic, especially Ice, Water, and Fire, is very effective against the Mortupice.

Higher powered magical spells can force the tar to break up entirely, flowing off the host with excruciating pain for him/her/it.

Holy weapons, and blessed salt can make the tar dissolve with similar effect.

Fortunately, for all their invincibility, they are very slow, and easily outrun.

Usually, Mortupice dwell in the highly misty areas of Mort Myre, where the magical mist shrouds their coming and going, in addition to keeping them just moist enough to move, but not enough to wash away. They usually sleep underwater, having an insatisfiable hatred for the living. When life passes by, the Mortupice will try to drag it under into the magical tar, to create more Mortupice. Why this is in their nature, is believed to be a survival instinct.

Unfortunately, this has led to large numbers of these strange monsters, with little ways to combat them available.

Ardougne Sewers contains a few now, as does Lumbridge Swamp.

Retrieved from "https://rsroleplay.fandom.com/wiki/Mortupice?oldid=41615"
Community content is available under CC-BY-SA unless otherwise noted.