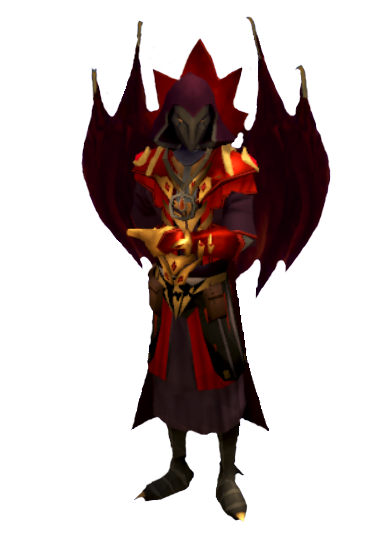 CHARACTER PAGE UNDER CONSTRUCTION AND IS CANNIBALIZING NATHANIEL NOUROM'S PAGE LAYOUT, THEREFORE IT WILL BE REFERING TO NATHANIEL. PLEASE DO NOT CONFUSE THIS TO BE NATHANIEL NOUROM

Mayes Kundrael is a Vyre whom is a member to the Vyrewatch and ranks highly within it.

Mayes' origins are unknown, due to it not being recorded and him not divulging any information regarding it, although it's said he's approximately 500 years old

He isn't a talkative fellow, he does however fight well, which has earned him his standing in vampyre society.

Nothing facial, he down however don a steel-chrome mask that has two segments, the bottom segment when removes leaves the segment above the nose, and reveals his mouth to allow for the drinking of blood.

The First outfit simply covers the majority of his body and is actually very good for combat, the chest part of this outfit connects to the bottoms which are robe-like in nature but contain various plates of steel concealed in the sewing of it, and this metal does not weigh him down due to the strength that Vampyres display. the fabric is also relatively thick that allows for those wearing the garment to explore most of Morytania with relative ease by foot, which is useful to Nathaniel considering that he attempts to understand the plant life of Morytania as a pass-time and for hunting also. It's also useful for exploration at night time and in the later seasons when it would be more colder. it's also thick in the sense that it would lessen a sword blow. this outfit, along with bracers along the forearm and lower legs also has a cap which matches this outfit, the cap can easily be tilted downwards, easily concealing his face, and if that doesn't work, the small gorget that covers his lower face can aid in this.

Nathaniel could, even in a humanoid Vyre form without any attempt to disguise his actual form could wear this and go fairly unidentified by most creatures. although Vyres can see straight through this as they have the innate ability to detect other Vampyres in proximity to them via smell. Werewolves would also potentially identify them, although this is due to the lack of smell. Thus, even if he did appear human werewolves would most likely stay away from him simply because they know that he's actually a vampyre.

This outfit consists of a blood-red overcoat which flows down to his knees, under which is a more regal coat of a dark-blue nature. all decorated with gold epaulets and trim. under these he wears a neat white shirt and black trousers.

He also has a cape to go with this outfit, which has markings on it as well as embossed patterns near the neck of the cape. with this he also has similarly coloured gloves and boots. The outfit all in all is very red, which goes quite well with his hair and crimson gaze.

Here are just a few of the unique traits that Mayes has.

Nathaniel sports a pair of 'Dagger-like' eyes that go with his sleek face. These eyes are said to be an piercing yellow colour.

As of standing, unknown, although it's confirmed that he has no facial hair.

Nathaniel has a lot of similarities to other Vyres in Vyre-form, although his colouration is different and there are no physical differences besides that of a Vyre in any other case. 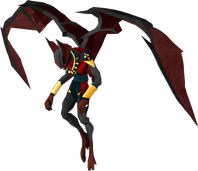 His markings are that of Dark Maroon and Jet-black and his crimson eyes can still be seen. A representation of this can be seen at the top right of the wikia when you select the Vyre option, or when there has been a full-shot of Nathaniel in his true form.

In terms of attire in this form, he wears robes of a red and dark blue nature, similar to his overcoat and undercoat of his humanoid form. and he also sports gold in this outfit, bracelets necklace, and so forth.

He, alike his mother, can be very kind to people who he believes deserves such treatment. but otherwise he will be neutral and maybe even cold at times, whether this is because he dislikes you or doesn't trust you wouldn't be immediately clear, but if you have no success of seeing a more personal side to him within a few months or a decent amount of conversations, you should just keep it to business or important matters.

When you get on his more intimate side he will be more willing to offer you his kindness, and will generally open up to you, making casual jokes or discussing less serious matters. At best he'd be willing to make deals to some extent, although he will still remain cautious until at least a few trades have been done prior.

As for those who oppose him/are lower in the hierarchy, he will have a calm attitude like his neutral mood, although he will be more quick to point out mistakes and generally be critical or lightly mock them. that and he can be relatively sarcastic to anyone who may ask him something that should seem obvious, or he might just be sarcastic for comedic effect.

• Nathaniel has been mentored in the way of mastering shadows, manipulating them into solid objects and at a stretch, even silhouette versions of people nearby. some of which he can meld into more horrific creatures.

◦ Therefore, Nathaniel has created "Umbra Specteris", a sword he completely manipulates from shadows. Although he usually only uses this for show.

◦ This sword also acts as a conduit for projectile Shadow magic, one of his signature 'moves' being his "Dark Thrust", simply, when he performs a lunge with sword in hand, it can cast a spear-like conglomeration of shadows to fire directly at where it was lunged.

[Credit to Lothorian] Motion Prediction: Many role-players have different theories on the method vyre vampyres use to predict motion. Lothorian's own motion reflex matches that of an average vampyre his age, being very advanced with a wide range for prediction. This character abides by the following theory:

Although this only works to a more extreme effect on humans and potentially werewolves. he can tend to influence Vampyres if they're not mentally alert, guarding their mind or simply not aware as to the probing. However, he has not developed the ability to probe peoples minds for memories, or to instil mental horrors. Although he can form phantoms out of shadows to achieve the same effect, mentioned above.

• Alike all Vampyres, Nathaniel possesses all of the traits that a Fully-fledged vyre would have. you can find a basis of what these abilities are Here. but in short, some of these abilities are: Inherent ability to use Blood magic, Misting, Transformation, etc.

Kudos to the creator of the Example Character, really helped to structure my page, thanks!

I'd also like to thank Lothorian Foryx for helping with the Humanoid portrait and True-form Full body shot, as well as the humanoid full body shot and finally the theory of vampyric motion prediction. Thanks a bunch!

Retrieved from "https://rsroleplay.fandom.com/wiki/Mayes_Kundrael?oldid=159946"
Community content is available under CC-BY-SA unless otherwise noted.