This page addresses information about Marimbo, her religion, and her followers as it applies to World 42 roleplaying. Any valuable contributors are welcome to add, especially as new content comes out in-game.

Marimbo, pronounced Ma-reem-boe, is the ancient patron god of monkeys. She is worshipped almost exclusively on the Ape Atoll and is depicted as a giant gorilla. She is aligned with enlightenment and is the "god of good times" Her symbol is a triangle which points downward, with a vertical spike hanging from the bottom point. Marimbo's perspective is not a very serious one - she's a god who really just wants to party and have a good time of things; she's cheerful and at times hedonistic.

Marimbo orginated from a jungle world that housed other giant gorillas like herself. A visiting, party loving god, came to that world one day in search of a drinking contest. Through events unknown; the god died during his revelry; and Marimbo was the one who absorbed his energy. Marimbo, after ascending, looked upon the faces of the mourning followers of the dead party god, and then decided to bring out the wine to make them feel better. She was then deemed the new "god of good times", and has since been traveling across the universe in a sort of pub crawl; drinking and partying away. At some point, Marimbo went to the Ape Atoll in search of followers. There she found monkeys; she may or may not have granted them their intelligence, and this as well might not have been the first place she found monkeys (as she herself came from a world of gorillas). Marimbo decided to stay on Ape Atoll, and the monkeys there still worship her to this day. The town Marim is named after her.

Marimbo and her religion seem to have the interests of monkeys in mind; it celebrates ape and monkeykind as a grand race, often also discriminating against other races for various reasons, including humans, gnomes, and any other race that might be able to overpower and imprison monkeys. Beyond that, practicers of Marimism will probably follow Marimbo's lead in placing value on partying and hedonism. Marimbo states that good times are for all to share, and that people such as bandits and thieves who ruin the fun for others are not counted among her followers, as they ruin parties. For one to follow Marimbo is to have the fun of others' in mind, and not just one's self.

This category addresses traits that players, often new ones, give their Marimist characters but that aren't actually seen in Marimists on Gielinor. That is, a character may have these traits, but it would not be expressly due to the teachings of Marimbo's religion. 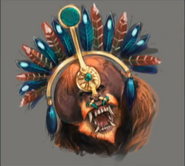 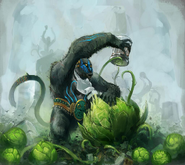 Concept art of Marimbo
Add a photo to this gallery

Retrieved from "https://rsroleplay.fandom.com/wiki/Marimism?oldid=123823"
Community content is available under CC-BY-SA unless otherwise noted.