Marethyu is a very intelligent, manipulative Mahjarrat, who was born in Freneskae to one of the mountain dwelling tribes, Mah-Kerrhoc. His father and mother were Renhyent and Imeena, and his only sibling is Jarenthar, a brother with whom he conducted his initiation into the clan. He is role-played by Lothorian F.

Once the young Mahjarrat had grown and developed into the natural lifestyle of his family and cousins, Marethyu took on the intensive mental training that the mountain tribe's culture dictated that he must learn. Slowly his power grew, and as his kind were most definitely war-loving, as the rest of the species, they were not entirely focused on physical strength so much as magical potential. For a few thousand years he adapted into the constant battle-filled atmosphere that Freneskae had to offer, and when Icthlarin's call came, he and Jarenthar were the only two of their tribe to journey to Gielinor.

As they fell into his service, one they would regret as decades and centuries passed, the two gradually fell into place with the rest of their kind, blending and taking care not to stand out as others might seek to do for fame. This was how they remained for the majority of their service, only taking a more advanced initiative when their allegiance shifted to the Forgotten Lord, Zaros. Now living in peace within Forinthry, Marethyu gathered with a group of his kindred from other tribes, a total party of twenty Mahjarrat (himself included), who had decided to return to Freneskae in search of the other ritual marker. Once within, the group was separated and he forced himself into a comatose state encased in rock and stone upon a deserted island, planning to restore his strength and then flee the plane centuries later.

He only resurfaced a great time later, after Guthix's death had transpired and the World Gate had fallen. Arriving in present-day Gielinor, which was now entering the dawn of the Sixth Age. Immensely confused, considering the empire of Forinthry was no longer in existence and Zaros was no longer on Gielinor, Marethyu spent a very long time searching for Jarenthar to learn the truth behind these happenings, and to know what transpired during the great gap of history he had missed completely.

Marethyu currently lives a nomadic lifestyle, and has at present made his home on Dragontooth Isle with his mate, Scorpiana. He has started to develop friendships and alliances with other Mahjarrat, but has mostly restricted himself to his small, close-knit family consisting of Scorpiana and himself, their daughters Accipitridae and Caeda, their son Skraene, and his brother Jarenthar.

Marethyu's varied past is not recorded in written form, but resides purely in his memory. He has only noted his experiments' success/failure in progressive tomes, instead of his personal biography. 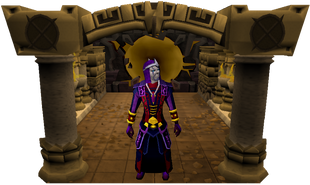 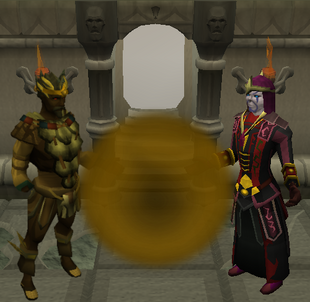 Marethyu and Ptolemos make magic
Add a photo to this gallery
Retrieved from "https://rsroleplay.fandom.com/wiki/Marethyu?oldid=143384"
Community content is available under CC-BY-SA unless otherwise noted.