This page serves as a source for information about the Mahjarrat as is applicable to World-42 role-playing characters. If you have any information to add to this guide, please do not hesitate to contribute. The Mahjarrat, meaning "children of Mah", are a tribe from a race called the Dreams of Mah, hailing from the ruined world of Freneskae.

The Mahjarrat found their beginning on the ruined world of Freneskae, when their creator, the elder god Mah, while dreaming attempted to create a new companion to replace Zaros, who had left her and Seren behind to fend for themselves. These failed copies of Zaros went on to become known as the dreams of Mah, and split into three known tribes; the Mahjarrat included. After their creation, Mah began to grow unstable in her slumber, having poured much of her energy into bringing these shadows of Zaros into being. As Mah began to have nightmares, which literally shook the land with their sheer force, Mah's remaining child Seren sought out the dreams for their aid. Disguising herself as Mah, she taught the tribes of two rituals; which became known as the rituals of rejuvenation and enervation.

The first of these rituals, the ritual of rejuvenation, allowed the dream tribes to recycle their energies back into themselves and Mah, but at the cost of the sacrifice of one of their own. This ritual prolonged their lives and helped provide Mah with more energy as the weakest of their numbers were sacrificed. The second ritual, the ritual of enervation, was used to siphon energy away from Mah as she experienced night terrors, so as to calm her in her sleep. This siphoned energy was then later used by the dreams to reproduce; creating more dreams to boost their numbers and strengthen their tribes.

As the dreams tended to Mah and helped her to achieve stability, despite the lack of Freneskae's anima, Seren finally found it in herself to leave Freneskae, thus leaving Mah to the care of her other children. After Seren left little is known of what happened, but there are a few glimmers into the past. One of the other tribes, the Mahserrat, chose to forgo the rituals, and thus died off naturally. As the Mahserrat died off, the Chelon-Mah tribe became more aggressive. It was the Chelon-Mah's belief that only the strongest should survive, and their tribe members destroyed each other in the process, and one was left standing with all the power of his fallen brethren. Finding no challenges left from his own kind, he turned to the Mahjarrat, and slaughtered many of them as time went on.

Much timed passed as the Mahjarrat faired for themselves as the last true remaining tribe, and fortune eventually smiled on them. In his search for protectors, the god Icthlarin found the Mahjarrat on Freneskae, and asked them to return with him to Gielinor. The Mahjarrat accepted, eager to flee from the onslaught of the last Chelon-Mah, and willing to go to a new world that held better promises of a future for them. The Mahjarrat left all that they had ever known behind, and journeyed on to where they did not know.

After arriving on Gielinor, the Mahjarrat took their place as protectors of the Menaphite empire, and staved off its destruction at the hands of Zaros's empire. During this time they became known to the Menaphites as "stern judges", and their influence brought prosperity to the Menaphite kingdom, as they defended its borders from the onslaught of Zaros's Avernic legions. It came to pass that Zaros heard mention of their name, as the Mahjarrat were spoken of with fear from his demonic soldiers, and he was amazed to learn that he had other sibling besides Seren. Seeing it as his duty to guide his younger siblings, Zaros set out to take the Mahjarrat under his wing, and it was not long before the Mahjarrat came to gravitate towards Zaros's influence. The first to do so was Sliske, and others soon followed.

The majority of the Mahjarrat came to accept Zaros as their ruler, being connected to him through Mah and being pulled towards his power. Icthlarin had not truly understood the Mahjarrat, and was unable to care for them as Zaros had. With his power, Zaros created the rejuvenation marker in the far North, which finally provided them with a way to rejuvenate themselves on Gielinor, something that Icthlarin had failed to provide. With all that Zaros was able to provide, it was not long before the Mahjarrat turned on the Menaphites. In a great battle that raged near modern Sophanem, the majority of the Mahjarrat attacked the Menaphite kingdom at Zaros's decree, and slaughtered the few Mahjarrat that remained with Icthlarin in an act of war. Enraged at this, the god Tumeken decided to curse his own lands to prevent the Zarosians from conquering it; and let forth a great blast of magic upon the Mahjarrat conquerors.

It was this single act that brought devastation and ruin upon both the Mahjarrat and the Menaphite lands that they had sought to overthrow. As this searing wave of heat rolled over the lands, the majority of the Mahjarrat tribe was lost that day to Tumeken's wrath, while the Menaphite lands were turned from a lush green paradise into a harsh desert. The remaining Mahjarrat receded to the capital of Zaros's empire; Senntisten, where they lived as lords and ladies of the city. Despite the loss they suffered during the Menaphite campaign, they continued to serve Zaros faithfully, at least most did, that is until Zamorak came to power.

As the empire grew and the power of the Mahjarrat did in kind, some grew more ambitious than others. Disagreeing with the orderly ways of Zaros's empire, Zamorak staged a coup that would change the course of Gielinor's history forever. In a plot that slowly grew until it reached its head, Zamorak stabbed Zaros with the Staff of Armadyl, and was imbued with energy from the god as Zaros fled his physical remains. With the defeat of Zaros, and Zamorak being taken immediately to Infernus by the Avernic after his ascension, Gielinor was thrown into turmoil.

Zaros's empire was eventually torn apart without his presence, and the Mahjarrat split between the Zarosian loyalists and the new Zamorakian followers. As the ages passed the Mahjarrat began to be forgotten by many, and lived on as legends while they continued to quietly exist in the shadows, besides Zamorak, who eventually returned to Gielinor and sparked war then razed and entire continent. Eventually the Mahjarrat began to become more widely known again, thanks to the exploits of an adventurer late in the Fifth Age.

This section contains details about the Mahjarrat race that are very widely accepted throughout the community of World 42 roleplayers.

One of the feared Muspah. 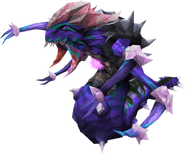 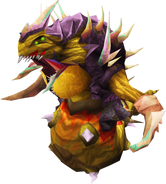 A Muspah that shoots its own spines.

The wide array of Mahjarrat skin tones.
Add a photo to this gallery

Lucien displaying his affinity for necromancy.

Azzanadra, in a shifted form. 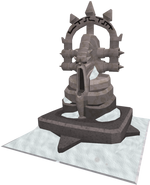 The ancient altar, which grants knowledge of ancient magics. 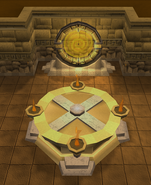 The Zarosian altar, which grants knowledge of curses.
Add a photo to this gallery

This section contains lore that, whether or not it's obviously present in-game, may be disputed for use in-character either because of conflicting interpretations of lore or because it makes the character over-powered.

This section addresses common issues and mistakes that are often seen with World-42 role-playing Mahjarrat characters.

There are a number of critical details that a player developing a Mahjarrat character should address in his/her bio in order to make it more legitimate and conform to the boundaries of lore. Not only is backstory very important for a Mahjarrat character, but the simple act of making a name can be difficult, as Mahjarrat character names are notorious for either being really good or really bad, take care when naming your character.

Naming a Mahjarrat is commonly viewed as tricky, due to the fact that many Mahjarrat names do not always follow a common pattern when it comes to vowels/consonants, and the general foreign-like feel that their names have. These factors have produced many outlandish sounding character names in the role-play community, that Mahjarrat would not normally have, so be cautious. One thing to know is that no Mahjarrat has ever had a family name, so they don't seem to keep track of lineage as much as other races; sticking to a first name only helps up lore-viability. Even though Mahjarrat names do not follow many patterns, many names have an A in them and produce an "ah" sound somewhere in their pronunciation (Enahkra "Ah, and Azzanadra "A"). Female Mahjarrat are also harder to name than males, as there are significantly fewer female names than male, though one reoccurring theme in female names is that they always end in an A (Enahkra, Palkeera, and Moia).

A Useful and lore-friendly way to create a unique name (for almost any race) is to mix and mash tidbits of other names to create your own. An example would be Azzarach (a mix of Azzanadra and Bilrach), or Mizzard (Mizzarch and Khazard). Here is a list of all Mahjarrat names mentioned in lore, see if you can create something unique out of them!

To put it simply, Mahjarrat a rare and powerful race, you will not typically find one drinking beer in your friendly neighborhood tavern. Although the information above can prove useful for building a character; Mahjarrat can be tricky to role-play as, and it can take practice to get it right, so this section lists some helpful pointers and other information you might need to bring that Mahjarrat out of the gutters and into glory.

Wahisietel, he who enjoys human company.

Lucien, who got what was coming to him. 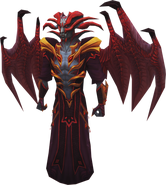 Yet more concept art of Freneskae. 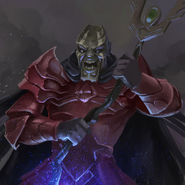 Palkeera, Khazard's mother's journal detailing that female Mahjarrat give some of their power when giving birth.
Add a photo to this gallery
Retrieved from "https://rsroleplay.fandom.com/wiki/Mahjarrat?oldid=156101"
Community content is available under CC-BY-SA unless otherwise noted.