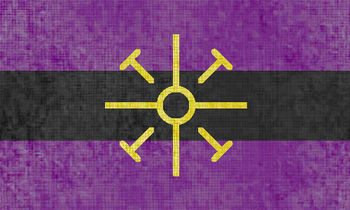 The Magnushuun, or "Goblins of the Great God," are a tribe of Goblins who prospered during the God Wars. They are a fictional tribe with no founding in official lore, existing purely in the roleplaying realm.

The Magnushuun are a group of goblins who broke away from the Huzamogaarb and Saragorgak tribes during their sales to Zamorak and Saradomin, respectively. These goblins acted as splinter cells. Then, as is expected of traditional goblins, they got lost. The tribal sergeants leading these two groups to their new bases held the map the wrong way, and re-merged together in the area now known as Hemenster.

A Zarosian Mahjarrat by the name of Celyn, "Agares," noticed them and could not pass up the opportunity to toy with this renegade tribe. He took the guise of an Ourg, telling these two groups that Bandos wanted them to converge here. Satisfied with being told by a superior to stay, they did.

Celyn had a plot in place. He slowly changed, over the course of 100 years, the teachings of Bandos to those of Zaros. He led the tribe to an area near today's Eagle's Peak, away from the wars. He taught them more about armour-craft and magic, and provided them with more general knowledge. As a result of these teachings, the Magnushuun eventually developed an intellectual superiority over most other goblin tribes on Gielinor. Of course, any plan to found a Zarosian settlement was not likely to settle well with the other gods, so when Celyn's actions were discovered, he decided that it was time to leave and wait for a new plan come to him.

The Magnushuun were left alone. A few of the smarter and stronger of the tribe fled to hide inside the many caves around Eagle's Peak. Sealing their hideout shut with earth magic, they managed to hide from the forces uniting against them and their allegiance to the Empty Lord. The safety of their caves allowed them time to plan their next actions. Knowing now that the god that they worshiped was stronger and more fearsome, they faced the difficult decision to convert back to Bandosianism or take the risk of committing to Zaros. Some were angry about being tricked by Celyn, some afraid of what would happen to them, some wanted to follow this new God. In the end, half of them left to follow Bandos. The remaining group stayed behind, slowly mixing in with the Thorobshuun around Hemenster after the war, masking their beliefs. It was not long until they forgot of Zaros, aside from the Magnushuun Writings.

The Armour of the Magnushuun

The Magnushuun may have been Goblins, but they were far from stupid. After the tribe was forced into breaking up, three of the Loyalists decided it was best to preserve their armour. These three, a Spearman, An Archer, and a Mage, dedicated temples to their armour, scattered across modern Gielinor.

One of these Temples, confirmed found, bore the armour of the Spearman. The Spearman armour was that of Goblin Mail, enhanced with blessed plate metal of steel. The boots worn with it, as well as the gauntlets, were also steel. The Helmet, a full helmet with thin eye-slots dedicated to preventing slashing damage, bears a purple plume. On the front of the metal's chestplate, and the Pauldrons, is Dragonstone in the symbol of Zaros. With it, it a Spear, made from Steel and Balanced to be one handed. A Square Shield is with it for use in Phalanx Formations.

Another Temple, bears the armour of the Seer. The Seer was a Priest for the Goblin tribe, acting in the place of Celyn when not there. His Armour was constructed out of Shade-Silk, with black unicorn hide and bones underneath. The armour is blessed specifically to repel Magic, while being able to take arrows and light slashes. No shield is used with the armour, but the staff is a hybrid capable of smashing, slashing, and spellcasting.

The Final Temple is that of the Bowman. The Bowman was a Goblin Sniper, known for being able to shoot from far away. The odds are, his bow is rotted away. Though, his Blessed Wyvern-Hide Armour has likely remained, if preserved properly.

All of these Armours are detailed in the Magnushuun Book.

The Surviving Magnushuun wrote their ideals, their thoughts, and their knowledge into a book for the future Goblins, hopeing that their faith would survive.

Chapter 1: Basics of Zarosianism
Chapter 2: History of the Goblins
Chapter 3: Ancient Goblinspeak (Yu-biusk words, Tribe names in this launguage)
Chapter 4: Steel-Crafting
Chapter 5: Magnushuun Temple Locations
{C Goblins are notorius for not reading. Celyn could see this as an issue to come, if Bandos let them grow in stupidity. So, he added a rule to the Basics of Zarosianism that parents must teach their children to read and write.
{C The History the Goblins is not well recorded. In the text, it is vague, yet existant. The extent is that Goblins are not truly from Gielinor, and that the "Great God" lets them live here, regardless.
{C Of course, being mostly written during the Ancient Goblin-speak Era, it is important that the meaning of the words is told. As the books get newer, the lauguage is updated for the Goblins. Though, the Ancient Words are never changed, the Secular words do change.
{C Steel. A metal Goblins have issues working with. The problem is heating it enough to have the carbon frame to strengthen it. Basically, it describes how to build a Steel Forge.
{C The Key section of this book. Why? The Goblin Armours of Old, and how to re-design them, lie at the temples. With a description of where they are, the Goblins would have access to well-designed armour for their use.
{C The Books are leather bound, stitched with tendons to hold the papyrus pages.
The Cover bears the mark of their tribe, an 'X,' not connected at the middle, with dots on the inside of each corner, centered on it. It is essentially, the shape of Varrock's fountain without the ring.

The Magnushuun have reformed their tribe, regaining number a bit, yet still not impressively sized for a military.

After locating the main three temples, the Magnushuun have their armour, awaiting their "Chosen-Ones" to bear it into battle.

Celyn/Agares - The "Great Ourg" who founded the Magnushuun. Many statues, crafted from Earth Magic and Solid Marble have been found in the old temples, though today, the Magnushuun do not worship their God through him, he is still highly revered in a role of a prophet.

Biznach - Ogre Merchant welcomed to the tribe. He runs a General Store in Oo'Glog, and on Market Saturdays sells Chompy and the Hard-Liquor known as "Gurglies" to the populace.

Retrieved from "https://rsroleplay.fandom.com/wiki/Magnushuun?oldid=81291"
Community content is available under CC-BY-SA unless otherwise noted.