Start a Wiki
Lycan Roach is a member of the Dragonkin Worshippers and serves as the Atinaese of the Specialists, dealing with all the more secretive dealings of the order.

This character is played by Bloodwood M (a.k.a Ongard Odin/ Gorbuk)

Lycan was born in Forinthy, long before the conquest of Daemonheim and their attempted conquest of Misthalin. He began his life like many other Worshippers was trained since a young age as a Warrior however he lacked the physical strength of those around him so he was instead made the apprentice of the Specialist Mettisarie and Torturer Halig.

Over the years he learnt many physical weapons of torture and through his research began too see the power the mind has over his victims and instead used those in captivity as test subjects to learn more about phsycology.

During his apprenticeship Halig grew distrusting of the boy and actually allowed a prisoner to escape just to kill Roach, his fellow Worshippers managed to rescue him but not before the prisoner shoved his hand into a cauldron of hot coal, permanently scarring it.

By the age of twenty he gained enough skill to get whatever information he needed from his prisoners without even having to torture them! With this he also gained a great intellect that is unusual for a Worshipper and he used his abilities to coup Halig's position and also to have the Atinaese allow Roach to research on all prisoners regardless of what information they carry.

Becoming Atinaese of the Specialists

During the Worshipper occupation of Misthalin, Lycan organises a group of specialists to hunt down a rebel Varrockian Noble who is fleeing for Falador, the party eventually capture the noble and execute him, returning to their leader all his belongings which include a Sapphire ring and a Black and Sapphire Cane. Lycan sees the beauty in these items and decides to keep them for himself.

Eventually after the death of the former Atinaese of the Specialists Lycan manages to gain the trust of the Gaiaximus and is made Atinaese himself.

In the Role of Atinaese of the Specialists

Whilst in his new found position he works with Herbalists to produce a halluciegenic which he now carries on his person at all times within the crystal of his cane, he also has that same Herbalist produce a ring with a suicide capsule concealed in the gem so that he is prepared if absolutely nescessary. He also recruited the slightly eccentric Hestian Duncan Thin-Blade, to produce equipment and disguises for agents in the field.

In this position he has arranged many important movements and has even been on a mission in Camelot himself!

During a mission to recruit the services of the talented Mutationist Doctor Amalarik, Lycan arranged for the Doctor to move his research into a large mansion in Varrock with the hopes of using him as a pawn in his plans. During his time working with Amalarik he discovered that his "dead hand" which had been burnt and scarred by the escaped prisoner all those years ago, could in fact spread infection around his body and that he was miraculously lucky it had not already. So the Atinaese had the hand amputated.

During a Worshipper Excavation in the Wilderness, the Empire came across a map leading to a Dragonkin Holy Site hidden in the deserts of Al Kharid. Curious as to why a Dragonkin Site would be in the deserts, Roach deployed a force of Worshippers consisting of Atinaese Jervis Rorke, the Dragonkin Experiment Wind, the Dionytes Smelly-Breath and Riccardio and a Persae. They were to set sail for the desert, find this Holy Site, clear out any problematic inhabitants then learn of the areas importance.

The team set sail aboard the Worshippers captured Asgarnian Vessel "the Lady Elena" and followed the coast towards the desert, however on route their ship was attacked by Mogres, fortunately there were no casualties and their Atinaese Jervis managed to save them by sailing their ship through a storm and losing the Mogres.

Whilst this was happening, Roach left Daemonheim, journeying across the Southern lands into Al Kharid and arriving just as the Worshipper party entered the Holy Site.

Roach waited outside as the party along with a mysterious Artemisian entered and killed the Fire Giant that guarded the crypt. He then entered, finding himself inside a grand hall, filled with carvings and symbols of the Dragonkin! At the far end of the room was a plinth and on it a Golden Orb. Roach ordered that Smelly-Breath grab the Orb and as he does so, all the symbols and carvings throughout the room glow with a Scarlett aura. A voice then filled the room telling them that this place was a Vault to a great power and in order to seize this power, the intruders must find all five keys, the first being the Golden Orb. The Goblin then placed the Golden Orb in the stone door that guards the Vault and a map appears etched into the Stone-work, leading them to their second Key.

Meanwhile, an intruder is discovered by the Artemisian, Roach interrogates her and she reveals that she was a passing explorer whom noticed the parties footprints in the sand. Roach, taking advantage of her talents, uses his abilities as well as his halluciegenic to brainwash her into hating Southern society and tries to recruit her into the Worshippers.

Little happened in response to their findings at the caves, and Lycan turned his focus back to other matters in the kingdom, in time he took part in many matters related to the Worshippers, spending time on stealth operations in Misthalin, Asgarnia and Kandarin, under his leadership, the Specialists played a major part in numerous acts including the death of the former Warlord Russia, the kidnap of famous Temple Knight Hayley Spears and finally, the kidnap of Straton Kull-Ryder, a former Worshipper that turned to Southern life.

In response to his kidnap and the kidnapping of his wife, Straton admitted that he had joined Southern society to further Worshipper goals and that he was being offered power within Asgarnia and for a time, Southern Asgarnia fell into the hands of the Worshippers. Unfortunately however, this was never meant to last and in part due to the reckless personality of Lord Straton Kull, the Sicarius made their move, storming the territory and assassinating him alongside his Epimethean bodyguard. Following this the Southern Asgarnian occupation fell to pieces, and though attempts were made to maintain order, the Worshipper forces eventually were forced to depart.

Upon the spark of the Sixth Age, the Worshippers went into exile on Kethsi, Roach at this point decided his time with the Worshipper society was done and made his way into Southern society with his ally Duncan Thin-Blade in tow. His current location is unknown.

Lycan is an elderly man and this is reflected in his appearance. He is tall and thin with a completely bald head and a small beard that lacks a moustache. His eyes are cold and calculating with a grey tinge and he has a long pointed nose. His left hand is withered from when one of his prisoners jammed his hand in a cauldron of hot coal and he used to wear a glove over his hands to conceal this, until recently when he had the hand amputated entirely by the Mutationist Doctor Amalarik. He also wears white robes that cover most of his body and neck. He also wears a ring with a small capsule disguised as a gem that would cause instant death when consumed. Finally he carries a black cane with a sapphire vial rather then a normal gemstone, within the vial is a halluciegenic he uses to turn his prisoners insane.

Lycan is a cold, emotionless, calculating villain who has no genuine friends. He instead gains the trust of people through fear and respect for his abilities. He is also very self centred as he was willing to kill his own mentor purely to gain more power.

The old Atinaese is also very calm in a dangerous situation, never panicking, only calculating his next move. He also holds a low amount of respect for human life as he is willing to sacrifice another persons life (such as Halig's) or turn another man insane just for his own personal knowledge. 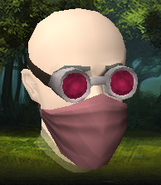 Atinaese Roach preparing for a torture

Atinaese Roach preparing for a torture

Atinaese Roach in his usual clothing

How Atinaese Roach looks in game

Atinaese Roach in one of Duncan's disguises for a mission

How Atinaese Roach's face appeared whilst in disguise

A sketch of Lycan Roach
Add a photo to this gallery
Retrieved from "https://rsroleplay.fandom.com/wiki/Lycan_Roach?oldid=114627"
Community content is available under CC-BY-SA unless otherwise noted.