Start a Wiki
Liliam Williams, also known to some as Lil (if they feel like shortening her name), is a character played by Nyx. She is based off her deceased sister Lilith. However, unlike Lilith, Liliam is a lot more stable and not as likely to fall victim to sexual urges that her Nymphomaniac of a sister had.

Note: This article can contain strong sexual references and dialogue, so please if it offends you, do not read past this Italic line. - Nyx.

Liliam is often a happy-go-lucky person, she is quite often easy to get along with and doesn't have a problem with anyone. Often when she faces a problem she will sit there and just play around with it till she figures out how to fix it. The girl has a slight father complex seeing as hers was never around in her life so she will begin to cling to almost any male that has a fatherly nature that she likes, for women she is a bit weary until she gets drugged up; then she has absolutely no shame whatsoever.

Liliam is a pale-skinned girl who stands at five feet six inches, her figure is a bit of a apple shape putting most of her weight in her upper body, because of this the girl suffers from being top heavy with large 36 DD-cup breasts. Her hair natural color is a dark black which she often keeps short and in a small pony tail to ensure it stays out of her face and doesn't get in her way.

A standard magically imbued staff that was collected within the Sicarius storage rooms, The staff is five foot even and made from willow allowing it to be flexible with runic markings carved up and down it's length with a light blue orb at the top to allow it to charge and store spells properly.

Liliam was born in the year 158 of the fifth age, Pentember 15th. Her father had long since abandoned her mother, leaving her with her only other known sibling at the time, Lilith, who came from a previous pregnancy years earlier with one of the Burthopian soldiers to the north. At birth, Liliam was quiet and oddity, the fact she was born with jet black hair which is fairly unusual to anyone who is from Taverley. 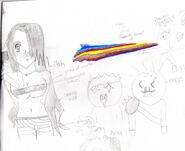 Drawn by Livviy of Lilith when she was in the Sicarius.
Add a photo to this gallery
Retrieved from "https://rsroleplay.fandom.com/wiki/Liliam_Williams?oldid=55454"
Community content is available under CC-BY-SA unless otherwise noted.