Leviat Delen-Avencianci-Da'Angelo is a Lunar mage character created by the user of the same name, known as Xanar on this wiki in December 2011 after two failed attempts at creating a Morytanian human of the same name. Leviat is a human mage with a bloodline that is pure Moon clan in origin, since the time of 2nd Age. The family consisted of several groups of people from the Moon clan who fled Fremmennik persecution of magic and traveled the world in search of a place fit to settle and build a new life for themselves. Over time the five families merged into an mesh of members, which prompted a forming of the Delen name, which consisted of each original family's first letter of their surname to make the name Delen. Leviat is known for his usually pacifistic and neutral stance on conflicts, however there are times when he has been shown to use force to keep the peace between others.

Leviat Delen is known to most everyone he meets as a calm individual who is seemingly cold to strangers at first glance, however this is not the case. This façade of detached observation is simply the way Leviat interacts with others in order to remain level-headed and act as a truly neutral party should a conflict arise between the others who roam Geilinor as he does also. Once you begin to talk and know the man known as Leviat, will you see the other side of the coin so to speak, for every coin has two sides. Leviat can switch from neutral pacifist to a brutal sadist in less time than you can bat an eye. However, these such occurrences are rare and caused only when under much duress.

Leviat's appearance at the time he was learning techniques for using the natural magic all around us for spellcasting, taught by Evgeni 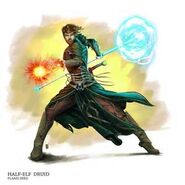 A shot of Leviat ready to cast some spells 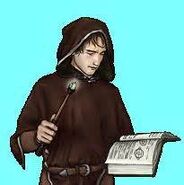 A picture painted of Leviat in his Battlemage armour. 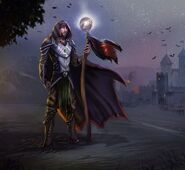 a picture of Leviat's grandfather, Wenlad Delen.
Add a photo to this gallery
Retrieved from "https://rsroleplay.fandom.com/wiki/Leviat_Delen?oldid=131718"
Community content is available under CC-BY-SA unless otherwise noted.