Leo is an earnest monk whose faith preserves their life as a spirit.

Leo was born on Teragard and moved to Gielinor during the Second Age, where they founded the Teragard Monastery. Its monastic order taught those who joined the truth about gods, and members practiced combat. They were less open to orthodox Saradominists, avoiding the perception of heresy.

The monastery lasted until the Third Age, when it was destroyed. Like Saradominist priests of the time, Leo then served Saradomin's faction as a combatant. Once the Fourth Age began, Leo was able to found another monastery, with the name and characteristics of its predecessor.

In Aid of the Myreque

After hearing of a disturbance afflicting the afterlives, Leo travels to the most affected one to investigate; the Zamorakian afterlife. They come across Heulfryn and Ptolemy Dean. The three discuss the situation, spirits mysteriously disappearing, and work together to find the cause. They try to pass on to the next area, but are turned away by the ruler, a chaos dwarf.

To progress, they decide to help one of the Zamorakians claim the throne. In the room was Myra, a Black Knight who once had the throne and was now trapped in a cage, Cenko, a sulking werewolf who had been defeated by the current ruler, and Filvenorg, a necromancer taking control of several spirits.

They convince Cenko to help them free Myra, causing her supporters to clash with the chaos dwarf's. While his army is distracted, Leo and Heulfryn defeat him. Cenko takes the throne during the uprising and progresses to the next area. Similarly, Myra reclaims the throne and the three progress.

They find themselves in a vast battlefield, with a mountain surrounded by dark clouds at the end. Joining up with a recently defeated Zamorakian named Lazlo, the four march ahead, most of the other Zamorakians deterred by their numbers. This changes when Daemonheim brutes riding a behemoth spot them. Leo and Heulfryn hold their own against the enemies until Ptolemy distracts a chaos giant, leading it over. The giant attacks the beast, allowing them to escape.

They reached the mountain and proceeded to fight their way to the top, where Cenko fought against a Kharidian wielding a powerful fire sword. Cenko was blasted away by the sword's flame, before the Kharidian himself was blasted away by Leo's lightning. Lazlo then tells them that they'll have to take the sword from their enemy's hands. As they attacked, Leo shielded themself and Heulfryn with a ward, who used a crystal chakram to sever the Kharidian's hands. Lazlo took the sword for himself, allowing the group to progress.

After the next trial, the three came across a shadowy figure ascending a staircase. Once confronted, the figure admitted to being the culprit. The figure mentioned that they had to meet "a friend" and escaped, but not before collapsing the floor below the three and being struck by lightning.

Once the three came to, they found themselves in beds. After a brief discussion, Leo tried to leave, only for an Imcando dwarf to discover them. After an awkward conversation about invading the dwarf's house and drooling in their beds, the three hurried out. The three found themselves in a city reminiscent of Falador, with walls that extended far into the distance. After being noticed by a centaur, they were lead to a meeting area. The centaur ran off after learning that the three were alive. They spoke to a sulking man, who knew someone that disappeared. The man told them about the icyene, who had suddenly appeared as others disappeared. They would approach people and ask questions, then leave. After learning that the three were alive, he warned them that the icyene didn't like outsiders. The area was suddenly empty, other than the four. A winged shadow passed overhead, and the man ran indoors. After being confronted, Ptolemy convinced the others to allow the icyene to take them into custody.

Leo wears a set of blue and brown robes, symbolizing the connection between Saradomin and his followers. They carry an ornate book on their side, and an incorporeal crozier on their back, invisible to common sight. A star of Saradomin is featured on their robe top, the front of their book and the end of their crozier.

Leo practices hand-to-hand combat and can use their crozier as an effective weapon. They also know electric spells.

As a monk, Leo's faith allows them to use even the most miraculous of prayers, and with millennia spent putting spirits to rest, their spiritual energy is inexhaustible.

As a spirit, they have the abilities that result from lacking a body. 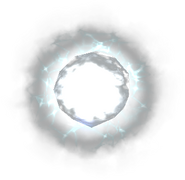 Leo in their incorporeal state. 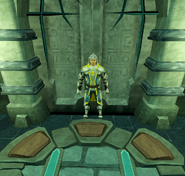 Leo during the Third Age.
Add a photo to this gallery

Retrieved from "https://rsroleplay.fandom.com/wiki/Leo_Munson?oldid=157017"
Community content is available under CC-BY-SA unless otherwise noted.