Start a Wiki
The Krios family is a family of Mahjarrat, their human spouses, and certain cross-bred family members. The family was first known in the realm of Gilenor in the Second Age when the Mahjarrat were summoned into the world by Icthlarin.

The Krios's were created in the Freneskae by the Freneskae God many years ago before the First Age. The Freneskae was a wretched and bloody place. Many Mahjarrat lived in tribes to survive. In one particular time, when Atlacoya met Painal. They instantly fell in love and a year later Atlacoya gave birth to Valkynez. Painal instantly saw potential in Valkynez. A few years later, Thane was born. Although Painal saw Thane would be a weak, young Mahjarrat. Because of this, all his parents ever did was feed him. When Thane became a teenager and Valkynez was a full adult, Tarkus was born. His parents thought Tarkus was much weaker than Thane, so Thane was put in charge to help Tarkus grow. One day, however, a portal opened and many Mahjarrat ran to it. The Krios' family made it in last but they were the only of their tribe. They were told by Icthlarin that they were his now. Valkynez and his parents followed with fierce loyalty. Thane and Tarkus, however, did not want to follow. Years passed and Valkynez met a Mahjarrat woman named Metzli. They fell in love and had Ananke. When the Krios' family was eating dinner at Painal's home to celebrate Valkynez's wedding, Thane had been training his skillis magic and swordsmanship. He went to his home, walked behind his father, and stabbed him repeatedly. He then threw several fireballs at his mother, burning her flesh and killing her. He then cut through Metzli's throat, decapitating her. Valkynez pulled a dagger out but Thane quickly hit him with the hilt of the sword, knocking him out. He woke up to see Thane laughing menacingly and he said, "You should've pledged loyalty to Zaros," reminding Valkynez that several Zarosian recruiters came by the other week. "I live and serve the pantheon!" Valkynez yelled as he then teleported quickly to his home to his five year old daughter, Ananke. He quickly ran to the nearest town and told a trader to take care of her and told the trader her name. Puzzled, the trader asked, "Why?" but Valkynez only replied, "You'll know in time." Looking to Ananke, he said, "In the future, find uncle Tarkus. Not Thane. Stay away from Uncle Thane." He then returned to his own home finding Thane there, saying, "I've been waiting for you. Y'know, I did want to see my nephew, but I suppose my brother will have to do." Valkynez said, "Thane. Stop, please." "Stop? Why should I? You tortured me as a child so I'm getting my revenge. So answer me: who is weak now?" Before Valkynez could answer, Thane stabbed Valkynez in the gut, then through the arm. Because of these wounds, Valkynez lost a lot of blood and fainted. Thane thought he was dead. Soon, Valkynez woke up inside a temple with a priest. The priest said "No. Rest. Hibernate. You are weakened. You will wake in the time Sleep well." Then Valkynez went into hibernation.

Many summers and winters passed since that terrible day. Thane then began making friends with his fellow Mahjarrat. Their names were Sliske, Azzandara, Khazard, Jhallan, Zemourgel, and even Zamorak. They frequently went on missions with each other or spoke often. Thane spent a lot of time in the libraries and speaking to Zaros on certain occasions. He was a very loyal follower to Zaros. Because of Thane's loyalty, Zamorak felt a bit threatened. Soon, Zamorak wanted power of his own so he plotted and, over time, got the Staff of Armadyl. Drunk with power, he attacked Zaros with it. Thane saw with his own eyes what Zamorak had done. He felt the weight of betrayal and anger drop in his chest. He then attacked Zamorak but, with this new power, Zamorak was too strong. After an hour of fighting, Thane was able to wound Zamorak, but not enough to harm him greatly. Zamorak eventually defeated Thane. Barely living and suffering from a mortal wound, Thane limped away and found a cave and began his hibernation.

Tarkus was wandering about Gielinor when he saw thousands of people fighting, all trying to kill each other. He did his best to run and escape but was stopped by a demon. Tarkus unsheathed out his sword and killed the demon. Afterwards, he sprinted off to a place where he could hide. He found a farm where a farmer and his wife were fending off against a hellhound. Tarkus ran and stabbed the vile beast, killing it swiftly. The farmers thanked him and let him stay with them. Several years passed as he helped defend the land. Then one day, when everything seemed calm, five demons showed up and fatally wounded Tarkus. After receiving this wound, he fell into a cavern and went into hibernation.

Soon after all the fighting stopped, Thane woke in the cave and walked out and saw everything was destroyed. While he was at Zaros' palace, already falling apart, he heard the entire upper level begin to give way and with quick thinking, he ran as fast as he could out of the ruins of the palace as crumbled to rubble behind, creating a big dust cloud. When he made it out of the remains of the palace, he saw snow letting him know it was winter. Thane began walking south until he saw a group of humans building somthing. He thought, "If Zaros is gone, then surely these people would worship something else." so he took the form of a Human and spoke with them. They told him everything about the God Wars. He asked if they knew who Zaros was and they shrugged their shoulders and shook their heads. They said they were a non-religious group. Thane got an idea of reuniting the Zarosian Empire by fooling these and other Humans into joining him. When he felt that they were ready, he would try and convert them to Zarosianism, thus beginning the slow process of reuniting Zaros' empire. He then formed "The Dominion of United Races." He recruited many races such as Elves, Humans, Dwarves, etc. When they were on patrol one day, they were ambushed by a wild, feral Avanisie, a remnant from Armadyl's army. It attacked them by surprise attacks like clawing Thane's face, leaving a bitter scar. Soon, the Zamorakians and Saradominists united and attacked the Dominion. After a year or two of fighting, the Dominion was defeated. Thane's been in hiding, mostly, to this day. Normally, he resides in his bunker on a far away subcontinent to the west

Tarkus awoke from his slumber much later then Thane, he roamed the world, searching for Valkynez, guideing humans, writing, until one day Tarkus was abducted by Thane. Thane threw Tarkus into a cell saying "he was going to wait until a ritual, or somthing" Tarkus spent many brutal hard years, being worked to his limit, little nourishment, every passing day tired, weak until one day Thane was killed by Dimitri Voshan but Dimitri planned on reviving him, he spotted Tarkus, he looked very simmilair to Thane so Dimitri killed Tarkus and took his body, placing Thanes spirit into it, reviving Thane, while Tarkus, will possibly forever, remain in the void.

Pictures of family members (most of them in Human form)

Layla standing in a bank 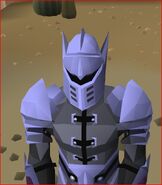 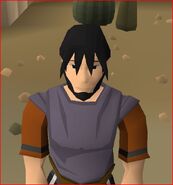 Thane in His favored Human form

An aged paining of Valkynez in his Favored Human form
Add a photo to this gallery
Retrieved from "https://rsroleplay.fandom.com/wiki/Krios_Family?oldid=149102"
Community content is available under CC-BY-SA unless otherwise noted.