Kraden Sebastian Arrav is an Alchemist-Warrior, originally from Taverly who was sent to live in Varrock until he was old enough to travel on his own. He spends his time trying to keep a balance in the land of Asgarnia, and learns all he can about Alchemy and Anima in his free time. This character is roleplayed by Saturos Roar. 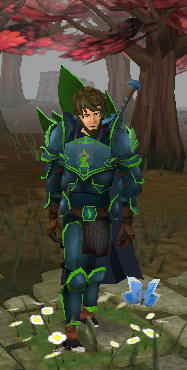 Not much is known about the Arrav family, however they had thwarted a threat known as the Dark Moon back in the Fifth Age. Noah Terlix Arrav the Second was the great grandfather of Kraden Sebastian Arrav. Nobody knows what happened of the rest of the Arrav family, Kraden was found on the doorstep of a druid's home in Taverly during the late Fifth Age. After learning what he could about Guthix he saught further knowledge and was taken to Varrock to learn from the library there. He spent the rest of his youth preparing to travel, as he became interested in alchemy.

Alchemic Psynergy and the Power of Anima 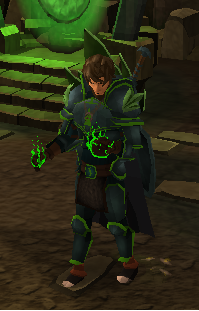 This eventually led to his research into the power of Anima. As an adept of Psynergy from the Venus element of earth, Guthix's death and release of power had actually fueled his power. Thus his Psynergy grew stronger as he sought out the shards of Guthix. This eventually gave him the ability to control matter and create objects out of what seemed to be thin air. Also this Anima empowered him with a green flame-like aura of pure Psynergy, or raw power. This is part of what allows Kraden to control his Anima and create objects out of thin air. Unfortunately a side effect is that using Psynergy can be very taxing when overusing the body's limits. Even though Psynergy is recovered naturally over time if there is an extreme use of ones Psynergy to the point where the users power runs dry, it will tap into the users direct life stream that keeps them alive.

Retrieved from "https://rsroleplay.fandom.com/wiki/Kraden_Arrav?oldid=146094"
Community content is available under CC-BY-SA unless otherwise noted.