Kobalos, pronounced Co-BA-lows, is a self proclaimed deity of battle and righteousness. Most of his followers include other Bandosains who love to fight and succeed. As such, he is also known as the Crowned Prince of War by a lot of his followers.

Kobalos is very powerful, known for being able to take multiple enemies at once. His symbol is of an eye looking at the truth, and scars that will remind those of its cost.

Kobalosianism is the belief that the one known as Kaboto Leafgrinder is the son of the god Bandos. Kaboto was a die hard Bandosian growing up. Born and raised in the ways of the war god. But around his teen years an epic life changing event happened, what seemed to be the spirit of Bandos came to him and told him he was his son, and said he was to help lead Bandos' army along side him when the time comes. Kaboto rebelled at first, but eventually accepted his destiny and took command. It wasn't until a few days before Bandos' arrival on Gielinor that he finally openly announced his existence to the world of his destiny. Since then, he has gained a number of followers who believe in him and dedicate their lives to his philosophy.

After Kaboto finally accepted his destiny, and started gathering a band of followers, he decided that name his mortal father gave him wasn't good enough. Kaboto Leafgrinder seemed to weak, and so, he gave himself a more godly name. He disowned his previous name and become Kobalos. With it, he announced the start of his own religion officially.

There was no "ascension" for Kobalos. He and his followers believe he was born with his godly status. It just wasn't until he was powerful enough and old enough did he realize them and assert them properly to announce his supposed godhood.

Kobalos' beliefs can be compared to Bandos', however there are differences. Knowledge and self awareness is encouraged to a certain level. All warriors must be strategists in order to be successful warriors. Many of Kobalos' followers share their battle ideas with him. Kobalos' believes that there is no such thing as a "job well done." throughout his entire life of personal experience he has realized no one will truly ever appreciate you. If his order wins a crusade against an enemy, finishes a group job, or does a favor for him. His response is "Ta Muut" Meaning; "You have done your job." Depending on your personal views on that, some see that as much greater and more worth than "Great job thank you." Even if won by a landslide, or by the skin on their teeth, the response is always the same. Ta Muut. If you come to understand and expect this you can finally move on to greater things. Honor is also a very important part of the religion. Honor means everything to a fighter and without it you might as well put down your sword. All enemies, big and small deserve respect. Respect your foe with every last attack. Respect that your enemy made a choice to go against you, and kill them honorably for it.

Unlike Bandos, Kobalos does not send his followers into hopeless missions, and he does not treat them like toys for his amusement. Instead of demanding worship from his followers he encourages it. Kobalos says he represents each and every one of us. He claims to be the representative of honor, love, pride, and righteousness to his followers. Under Kobalos, we can be united to protect and honour ourselves and our ways. Kobalos preaches that battle is a very vital part of life. Above everything else war is the thing that has the most change on anything. For this sake, we must press to be the best we can be, to protect your little brother, you mother, your friends, or anyone you cared about, wouldn't you you agree only the best are good enough to keep them safe. Those who appose you, threaten to take your family, friends, or ways away. Throw yourself at them. Unleash not just your rage but your righteousness. You have something they they may have not had, and that's something to fight for. People who put everything else before themselves. Always be ready to put your life on the line for these things. Besides these things Kobalosians also believe in the calling of prophets to help guide them. Even as Bandos before him called prophets for his followers; but with a few differences.

When a prophet is called by either Bandos or Kobalos to the Kobalosian faith they hold that calling until death. With a few exceptions, they can be impeached by the leaders of Grómhold along with three fourths of the city population. Or if Kobalos himself removes the title from them. There can only be one prophet of Kobalos at any given time, in the early days a new prophet usually wouldn't come forth right after the death of the previous, as they were often looked down upon sometimes for preaching slightly different doctrine from traditional Bandosianism. Early prophets where also very Bandosian, although had a unique incite and testimony of Kobalos and his power. The modern job of a prophet is to lead the church and help kept the faith alive, to lead the people by example and speak to the people though the essence and spirit energy of Kobalos, as well as countless other jobs.

A list here is given of the prophets of Kobalos in order first to current.

Kobalos' followrs mainly consist of former Bandosains and a few others who share his views and support his cause. The locations where the biggest number of Kobalosians are currenly located is the city of Grómhold. However there are a few Kobalosians outside the city and the clan.

Kobalos expects his followers to dedicate themselves to Bandos as well as himself. However, there are some stipulations. Some of his most common preaches are as follows.

"FOR BANDOS! FOR KOBALOS! FOR VICTORY! FOR WAR!"

This chant was first introduced to the Chosen Battalion by Kobalos when he visited them not to long before the war between Bandos and Armadyl started. It holds a very dear meaning to Kobalos and his followers.

Kobalos, with is "father" behind him. 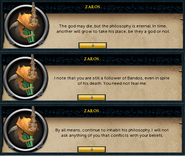 Kobalos and Zaros: similar ideas
Add a photo to this gallery
Retrieved from "https://rsroleplay.fandom.com/wiki/Kobalosianism?oldid=155784"
Community content is available under CC-BY-SA unless otherwise noted.