Kelly Beckett is a young Temple Knight Proselyte role-played by the user Kara-Meir I on World 42. She was generally made for a little private PvM role-play story-line involving the second God Wars and is currently alive on Gielinor. However she is fully able to enter public role-plays.

Kelly herself is a humble, quiet, observant, and respectful person. Se can be a little shy, and has a slight fear of interaction with other people. However, this does not stop her from doing her job as a Temple Knight. She is very obidient and will do what she is ordered to do. Above all else, Kelly has a very high standard of morals and will put her life on the line to save others without any question. On the other hand, she can be very curious, and although she will perform nearly any order, she will do doubt question the more questionable orders.

Kelly would stand at a good 5'8 with a relatively pale but natural skin complextion. Her skin really wouldn't have many blemishes or scars, so that is definately something she takes pride in. As far as her body type goes, she's pretty lean and slender. Nothing real special to look at. Not too much of a muscle head either, although serving as a pointman in the Temple Knights. She definately looks athletic though.

Kelly would look a little young for her age; To the point where some bartenders might question her age when inside of a pub. Some days she'd take it as a compliment while others it's just a plain neusence. Her face would generally feature much more feministic features than masculine features. She'd have small ears with an average sized nose, and thin red lips with a slightly more rounded than pointed chin. Her eyes would be of a blue color, and they'd usually be outlined with mascara. As far as her hair goes, it would be long, straight, and bright blonde reaching down all the way to about the midsection of her back. Most of the time she likes to keep it down but when she goes on duty or has to wear a helmet she usually ties it up into a bun or ponytail.

Born in the northern Asgarnian village of Hereford on the 11th of Novtumber, sometime during the 5th age as an only child and daughter to the local lumberjack Tyler Beckett and his wife Abigail Travers, Kelly had been raised with a relatively normal and enjoyable childhood. Although her parents were of the lower class, they managed to get by pretty well as her father Tyler made good profit selling oak logs and hunting game while her mother Abigail catered to the house and made dinner every night. Kelly herself had a pretty good relationship with her parents and had a decent amount of friends within the small village of Hereford. Although Kelly was raised Saradominist, she never really took the religion very strict and looked at it with a lax view. From here until her adoolesence, there isn't very much worth mentioning considering her childhood was for the most part normal. All Kelly really did all day was play games with her friends, mingle with her parents before dinner, and just relax for the rest of the evening until the next day came. Kelly never really learned a trade while growing up as a child. She just took after her mother's duty of looking after the house.

As Kelly grew into her adolesence, she started to experiment with drugs such as dwarf weed and started 'playing around' with the opposite gender. She kept it hidden from her parents for a while but like most teens in this situation, it only lasted for so long until her parents found out. They really weren't too happy with her. But they never really punished her. They just scolded her, nagged her, and took her drugs away as they found them. Kelly started gaining a 'whore' and 'slut' reputation around the village. Loosing friends, buzzing by relationships like there was no tomorrow. It was as if she had 'gotten with' every male in the village. Eventually she had been hired at the local pub as a 'barmaid'. She basically served the patrons (plus a little bit more if they had the money, if you catch my drift) underneath the bartender, who were all mainly travelers passing through the village. Her life really turned around. She started loosing self-confidence, her relationship with her parents started falling, and she lost nearly all of her friends. By the time she had reached her adulthood, she was kicked out of her house. 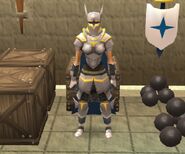 Kelly inside the Temple Knight Armory sporting full combat gear as an initiate. 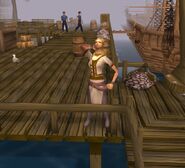 Kelly in the midst of combat fighting against the Kinshra and forces of Zamorak during the Battle of Lumbridge.

Kelly relaxing beside a fire inside of the Saradomin camp during the Battle of Lumbridge awaiting some beef stew to cook.

Kelly fighting alongside one of her Temple Knight brethren during the Battle of Lumbridge.

Kelly, seen with one of her friends Andrew, seated in the back of the St. Rimmington's Church during a meeting with Lord Dion Magnan's group.
Add a photo to this gallery

Retrieved from "https://rsroleplay.fandom.com/wiki/Kelly_Beckett?oldid=124603"
Community content is available under CC-BY-SA unless otherwise noted.