I, Horatio, am a magician faced with the daunting task of making the world more improbable! And selling stuff (which you should buy.)

So one day, I wound up at a cold place with a smart guy and a bad poet who turned out to be pretty cool (this had nothing to do with the temperature.) But I'm getting ahead of myself, he wanted us to solve some kinda puzzle but then he got all upset when we didn't do it fast enough. Anyway, he reminded me to use a guide and that was pretty helpful. I had to steal a locket, order a cheese and tomato batta, then feed it to an artifact thingy. Then we had to pluck some produce from a tree while it was threatening us with a curse and feed it that. So this Bandosian pirate with a symbol for a face (it looks as stupid as it sounds, heh) had us take it to some ancient imprisoning place with giant statue guards and release a lake lady. And things weren't going so well at that point. Symbol-face told me he wasn't gonna pay me! NOOO! But yeah, that was a mistake! I teamed up with their enemy, Marc. I'll make sure he pays for this both literally and figuratively.

While hanging out with an easterner I ran into him with his gang in a palace, but they ran away. I doubt it was because they realized how dangerous I am, they were likely just being a bunch of big scaredy babies. Heh. Well, Marc invited me and a big guy called Oof ('the Fist') to his hideout and had us investigate a kidnapping spree. The place we searched was all scorched up for some reason, and these farmer guys wouldn't tell us where the kidnapper was unless we did suspiciously described favors for them. Ain't nobody got time for that! I knew what they were talking about...

Then we had some luck and motivated one of them to show us where he was. Only it turned out to be bad luck! He tried to lock us up and get us mauled by dogs, but then it switched to good luck as my good old buddy the poet broke down the wall and got us out of there on some hornless unicorns. But then the unicorns decided to go for a swim so we had to go on foot again.

We made it to this drab-looking tower where we hid and watched. It turned out the kidnapper wasn't who he said he was! He was using a disguise all along! But I didn't even know who he was pretending to be, so whatever. We were noticed by some lake ladies, but they were no match for us. Marc was there, but I don't know what happened to him after that. We bounced up through an open window via trampoline and found some notes about lake lady conversion. Then we made it to the top, which was actually a floating island. The kidnapper tried to zap me with his electric projectiles, but I was too fast. Oof held off his gang of lake ladies until he had the bright idea of combining with me to put the best of our strengths together. Worked like a charm, the kidnapper got pulverized by his hulking fists and my rock cakes. Good game. For some reason, he dropped a book after we beat him into next week.

I wear a red and white suit with a yellow amulet and cape. Not that you can tell, but under my headwear I've got the coolest hair and fanciest mustache around. Oh, and my hair and skin match the respective colors of my suit.

My most defining feature. With the power of improbability, I can do anything imaginable! Also anything unimaginable, but you'll get no examples or demonstrations from me. 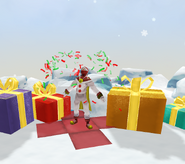 Retrieved from "https://rsroleplay.fandom.com/wiki/Horatio?oldid=157014"
Community content is available under CC-BY-SA unless otherwise noted.